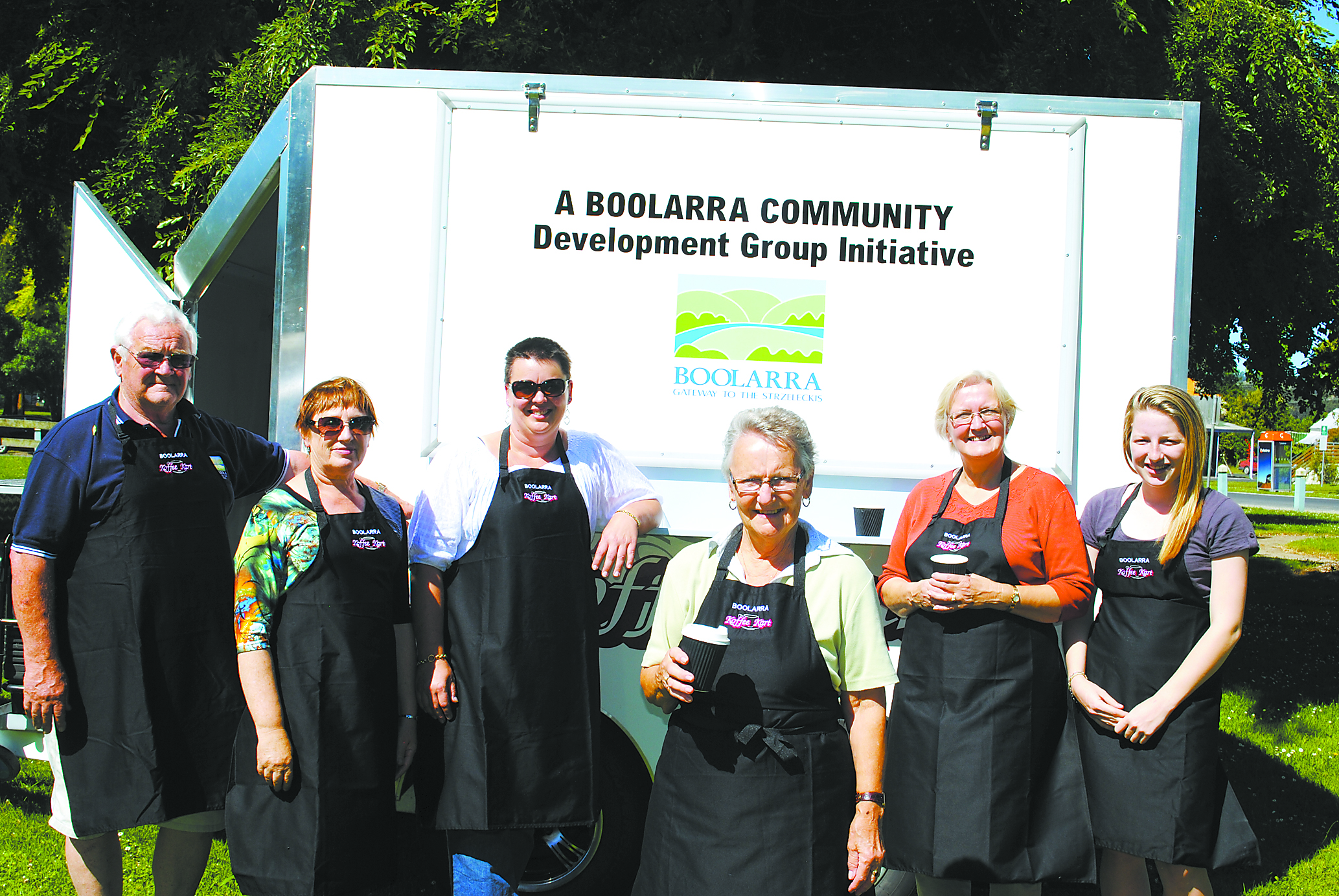 A mobile coffee van funded to support the Boolarra community served more than 330 customers during its first three outings after months of planning and organising.

As part of the recovery efforts of the Black Saturday bushfires, which destroyed 30 houses in Boolarra in January 2009, the Boolarra Community Development Group received grants from the Victorian Bushfire Appeal Fund to build a sustainable business.

The BCDG invested in a mobile coffee van known as the ‘Koffee Kart’ which allowed a committee of management members to serve hundreds of tired bike riders during the Great Victorian Bike Ride stops at Traralgon and Mirboo North in November and free coffees at the Old Mill Site opening in Boolarra last month.

Committee of management member Tracy Anderson said it was “a bit scary” when faced with so many riders on their first day.

“But we got through it and were asked to come back that evening and serve at the celebrations,” she said.

Ms Anderson said the BCDG wanted to create a sustainable business to promote training, a sense of employment and community for local people, especially its younger residents.

“This experience really gives people a shoe in the door,” Ms Anderson said.

“When people go for jobs employers often ask ‘well what experience do you have? None? Come back when you have some experience’.”

Fellow member Rob Henri said after receiving $5000 to create a business plan they explored options and received a further $25,000 to buy the van, coffee machine and provide training.

He said BCDG held two barista training sessions provided by Central Gippsland Institute of TAFE with about 20 people at each.

Aasha Linn, who works at the Boolarra Milk Bar, said the training she received helped her at work and she enjoyed serving coffees at the Old Mill Site.

Ms Anderson said the cart already had four or five tentative bookings for this year.

“We’re also available for hire for private functions, such as council corporate days,” she said.

Mr Henri said “even without leaving Boolarra we’re sure the van will get plenty of use especially during footy season”.

“The beautiful part is we’re a community affected by the fires who had a action plans and got on with business.”

Ms Anderson agreed the cart’s goal was to aid the community’s recovery and continue to raise money, adding the community was on the “positive side of healing”, though there were still some people suffering.

The Koffee Kart will next be serving hot coffees at Boolarra’s Australia Day breakfast on 26 January, from 7.30am at Railway Park.

All profits will be invested into the Boolarra community via infrastructure improvements and direct contributions to local groups.

For more informatin phone Tracy Anderson on 0408 038 769 or email boolarrakoffeekart@gmail.com