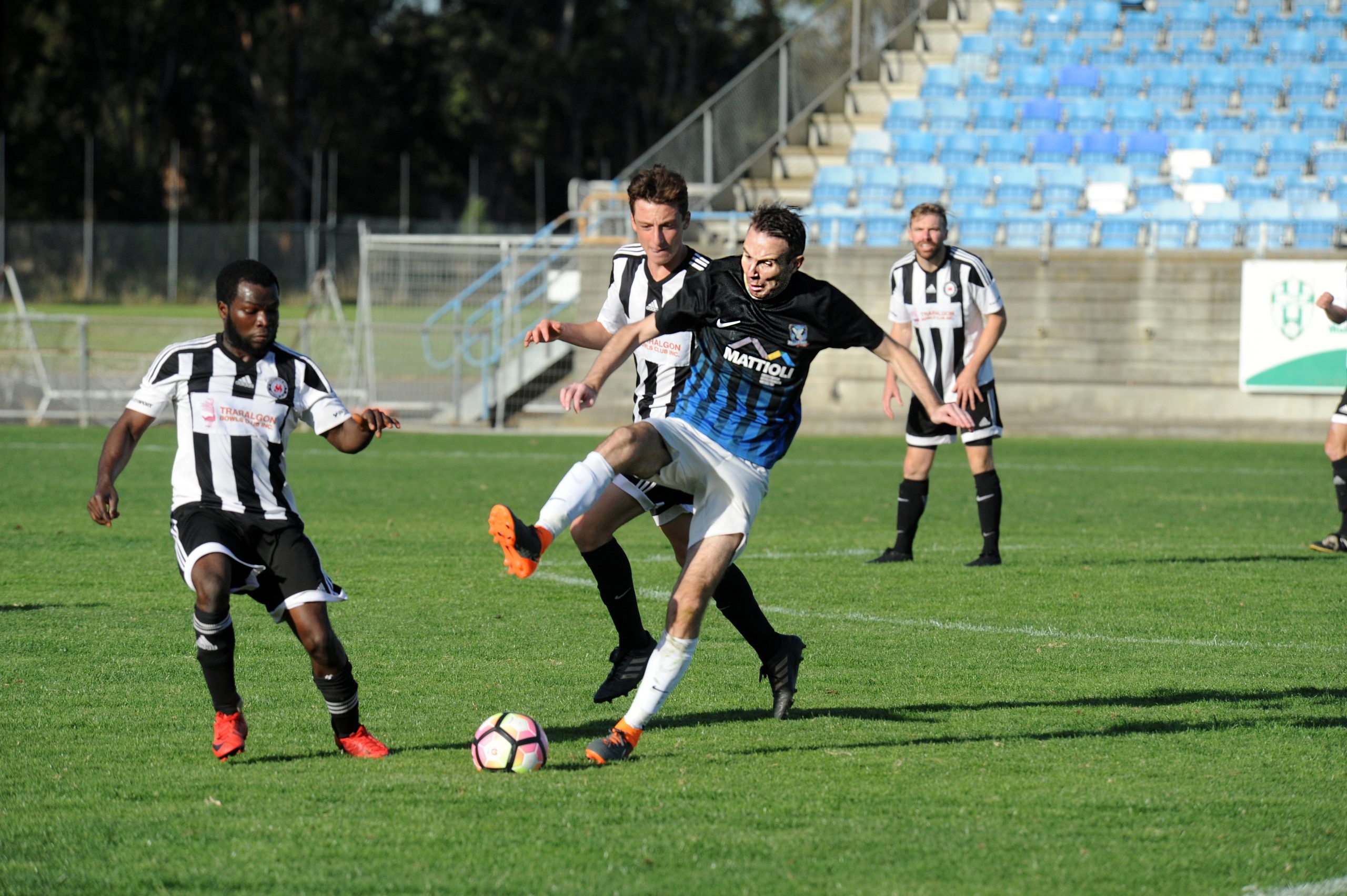 Newborough/Yallourn have established a 10-point lead at the top of the premiership table after their 1-0 victory over third-placed Falcons at the weekend.

Touted as the match of the round, the game was a thriller with the ladder leaders scoring the only goal through defender Shayne Pavich.

Falcons had chances throughout the match but the three at the back for NYU in Alex Bowman, Shayne Pavich and Stuart Bowman were relentless.

Keeper Damien Gilbert had a quiet day with a couple of regulation saves.

Most of the play was centre-field with frequent turnovers.

Conditions were slippery at times with players losing control of their footing.

Mark McHallam was a powerhouse for Newborough/Yallourn as were Alex Bowman and Adam Batt in defence.

Late efforts by Falcons Jamie Pistrin and Jaxon Nutida were well saved by Gilbert in goals.

It was the first meeting of these two this season at league level after their scheduled first round match was deferred until the catch-up round.

Traralgon City hit the front at the 11-minute mark through a penalty taken by Jake Bujida but Olympians equalised soon after when Alradi Ali popped one through 11 minutes later.

Neither team could break the deadlock, but with a minute to play Olympians’ Jayden Steele was able to to give his side the 2-1 victory and bragging rights.

Moe took 72 minutes to shake off a persistent Sale team and win, 1-0.

The Swans applied the pressure at every opportunity and did not allow Moe to play their usual free-flowing game.

Both teams had chances but wayward kicking and good goalkeeping kept the game scoreless until Moe broke through with a goal to Nick Fogarty at 72 minutes.

Fortuna had a strong win over Churchill, the Lions scoring 3-0 to be within striking distance of the five.

Fortuna hit the goals at five minutes through Matt Coward, which was enough to hold on to until the break.

The Lions grabbed their second just after the break from Hayden Cook and then consolidated with their third with six minutes to play from Germaine Otiero.

The match is rescheduled to Saturday night at Monash.

Traralgon City retained top spot on the ladder with a 3-0 win over Olympians.

Fortuna have issued a real challenge, building up goal differences after their 8-0 win over Churchill.

Sale and Moe played out a scoreless draw.

Catch-up round this weekend

Monash are home to Trafalgar on Saturday night in seniors and reserves and Traralgon City play Olympians.

Traralgon City is in second place on the ladder while Olympians are fourth.

In the second division, Tyers and Pegasus will be fighting for top position when they clash on Sunday at Tyers after their first game was called off after a player was injured.

Churchill will play Fortuna in another division two catch-up match.

The Nan Bosma second division cup deferred match between Fortuna and Moe will be held tonight at Fortuna from 7pm.