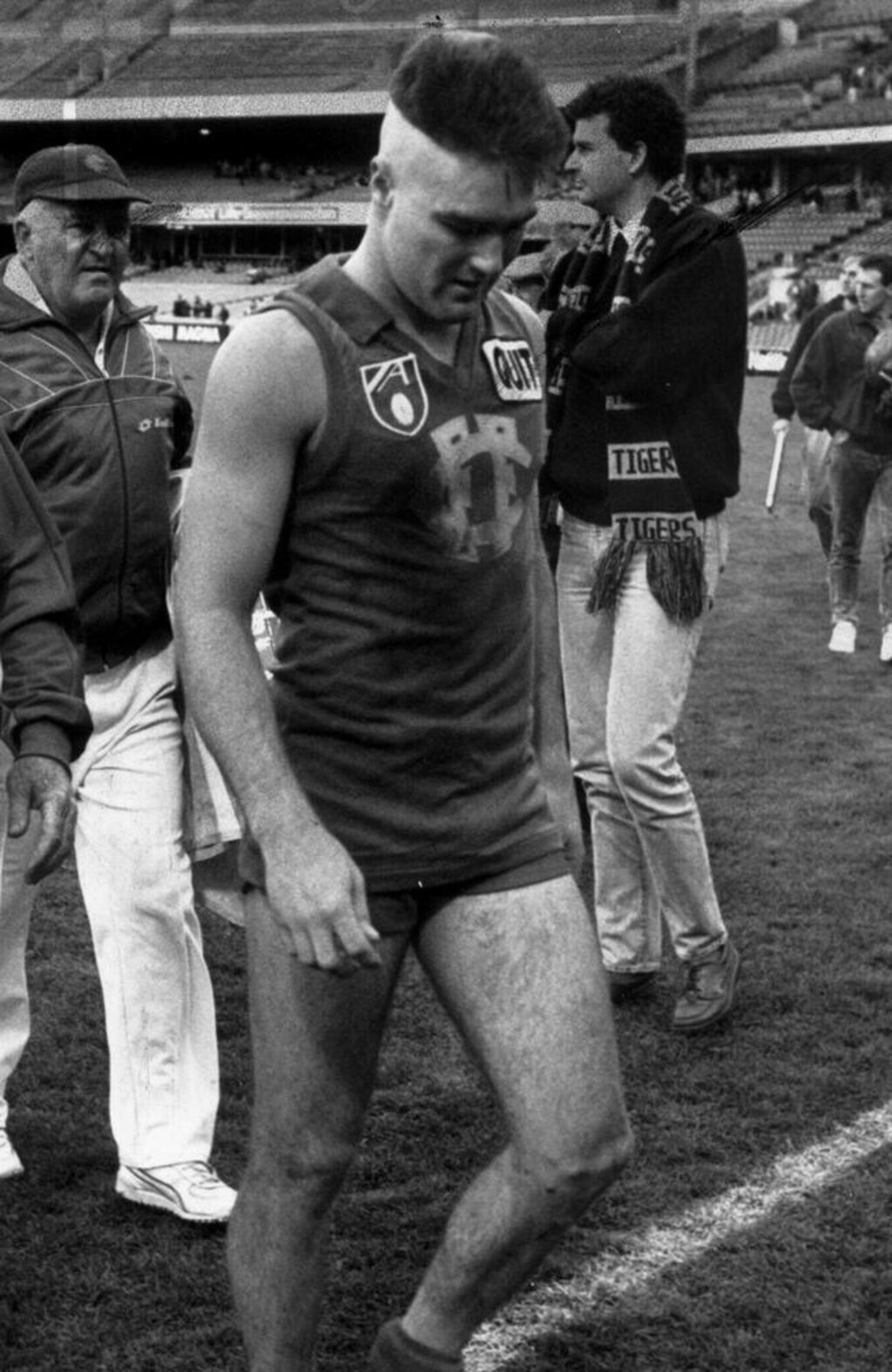 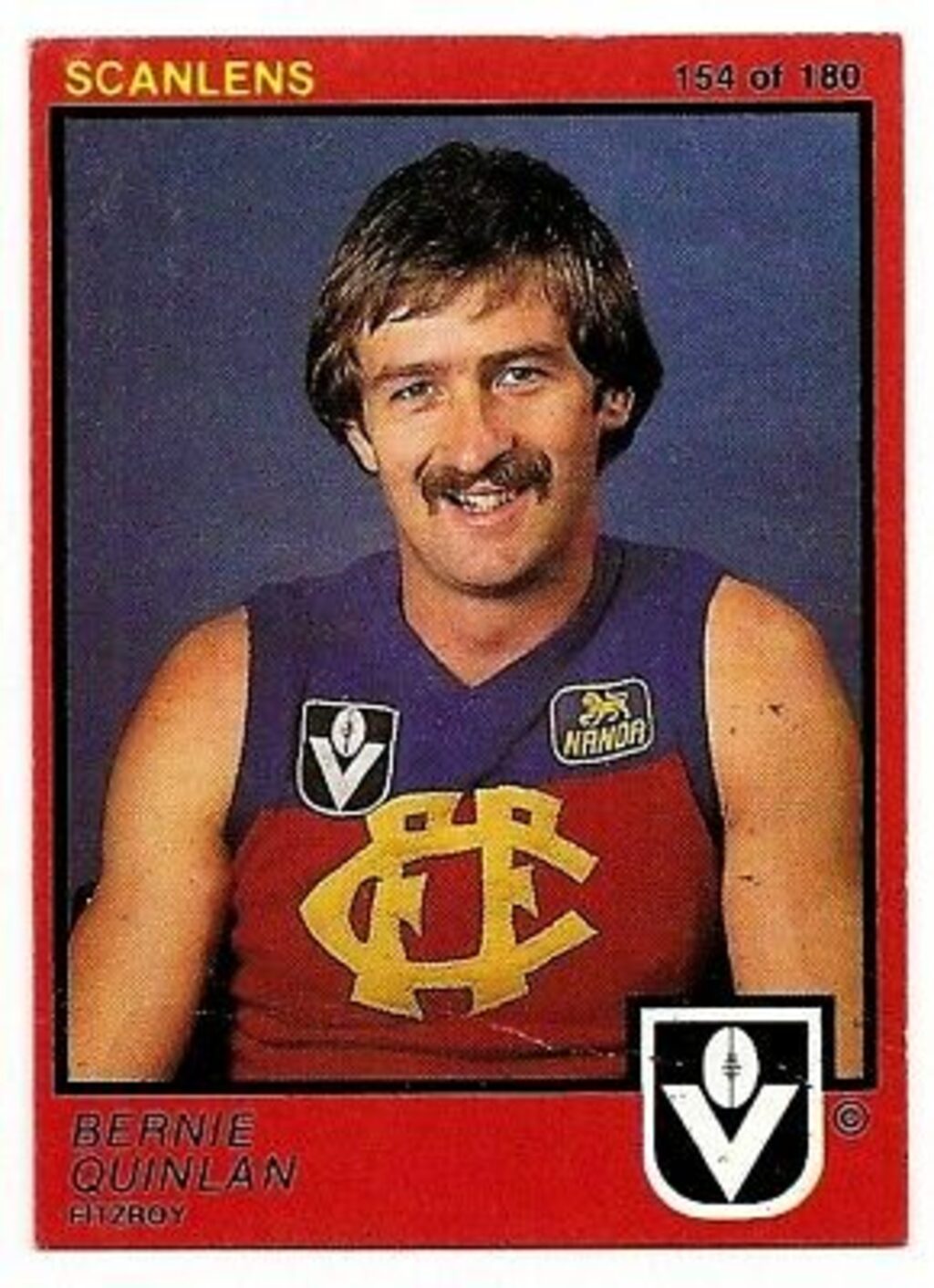 LAST Monday marked 25 years since the merger between Fitzroy and the Brisbane Bears was announced.

A quarter of a century on, the Brisbane Lions have worn the maroon, blue and gold of Fitzroy, with their three-peat dynasty of 2001 to 2003 cementing them as arguably the greatest AFL/VFL team of all time. Depending on who you speak to, the Brisbane Lions has either given old Fitzroy supporters a club to barrack for, but for the many diehards, the merger of 1996 still evokes painful memories. Fitzroy still exists in its own right today, playing in the Victorian Amateur Football Association at their traditional home of Brunswick Street Oval. In this week’s Four Quarters, we take a look at the Roys connection to the Latrobe Valley. <b>1. Bernie Quinlan</b> AN automatic choice for the top spot. Quinlan’s numbers and accolades speak for themself – 366 games, 817 goals, a Brownlow Medal, two Coleman Medals and a place in the Australian Football Hall of Fame. Hailing from Traralgon, Quinlan was recruited under zoning laws to Footscray in 1969. During his time at the Bulldogs he played 177 games before moving to Fitzroy for the 1978 season. Remarkably, Quinlan hit his peak at an age many players are on the way out. He won the Brownlow Medal in 1981 as a 30-year-old, and back-to-back Colemans in 1983-84 after kicking 116 and 105 goals respectively. Known as ‘Superboot’ for his ability to effortlessly kick the ball long distances, Quinlan was selected at centre half-forward in Fitzroy’s team of the century. All in all, he played 189 games and kicked 576 goals for the Lions. According to local legend, Quinlan once kicked a torpedo from the Traralgon Recreation Reserve oval that sailed over the railway line and bounced into Victory Park. <b>2. Darren ‘Doc’ Wheildon</b> IN terms of truly unique characters, few could rival Doc Wheildon. Originally from Newborough, Wheildon played in a senior premiership for the Bulldogs in 1988 before making his way to Fitzroy. He found instant success with the Roys, playing in their 1989 reserves premiership, and would go on to play 70 senior games up until 1994. While his career was only relatively short lived, Wheildon became a cult hero in the early 90s due to his appearance, such as an extreme buzz cut hair do, and various idiosyncrasies, such as shaking a goal post while an opponent was having a set shot. Intertwined with all of this was an ability to kick freakish goals, the best of which arguably came in 1992 at North Hobart Oval when he defied the laws of gravity to kick a half volley from deep in the pocket. The Doc won the Fitzroy goal kicking in 1991 and 1994, however in the eyes of many his career is one that went largely unfulfilled. In his six years in the AFL system he was sent to the tribunal seven times, and was also sensationally dropped the week after kicking eight goals and collecting three Brownlow votes by coach Robert Shaw for disciplinary reasons. Post AFL, Wheildon played for Wonthaggi and has since gone on to be a carpenter in the area. <b>3. Paul Abbott</b> ALTHOUGH more closely associated with Hawthorn, Paul Abbott did finish his career at Fitzroy. Coming from Morwell, Abbott played 85 games in the brown and gold and was part of premiership winning teams in 1986 and 1988. A broken leg in 1989 meant he missed the entire next season, and then crossed to Fitzroy after the Hawks won another flag in 1991. Abbott spent two seasons at the Lions, playing 26 games to end his career for a grand total of 111 matches. He played virtually a full season for Fitzroy in 1992, and collected three Brownlow votes for his performance against Carlton in Round 14. The following year he added four games, in what was the season many people felt was the beginning of the end for Fitzroy, as the club moved its home games to the Western Oval and lost Michael Gale, Peter Caven, Paul Broderick, Matthew Dundas and Alastair Lynch on the famous 10-year deal. <b>4. Alex Ruscuklic</b> MANY readers may see this name and think Alex who? Another Morwell lad to play for Fitzroy, Alex Ruscuklic was born in Germany and played for the Roys between 1966 and 1974. He kicked 189 goals during his time, and headed the Lions sharp shooters win 49 majors in 1970. The following season he took mark of the year for a spectacular grab at centre half-forward playing against Carlton at Princes Park, the same year he took the most marks in the league with 216. Amazingly, he came fifth in the 1971 Brownlow Medal but did not win the club’s best and fairest. He later transferred to Carlton and played nine games in 1974 to see out his career. His younger brother Peter also played for Fitzroy, notching up 10 games in 1975-76 and a further four for Geelong in 1977. <b>Honourable mentions</b> <b>Robert McMahon</b> PLAYED two games for Fitzroy during their last season in 1996 and holds the distinction of playing in the last ever match between Fitzroy and the Brisbane Bears before the clubs merged. McMahon wore a familiar logo at Fitzroy, as he came from Moe, where he played 16 senior games. <b>Robert Ireland</b> ANOTHER Newborough player to make his way to Fitzroy. Ireland played five games for the Roys in 1969-70. <b>Bill Stephen</b> FITZROY legend Bill Stephen, who played 162 games from 1947 to 1957 and went on to coach the Roys in 212 games, was approached by the Yallourn Football Club in 1954 to coach the club. Stephen was enticed with £3500 spread over five years, which was reportedly sweetened with the inclusion of employment and a house. For perspective, it was possible to buy a three bedroom house in regional Victoria for approximately £2500 in the mid 1950s, while the average yearly wage was £296. Astonishingly, Stephen rejected the offer to stay with Fitzroy. <b>Are you an old Fitzroy supporter? Share your memories by emailing sport@lvexpress.com.au</b>

Newborough’s own: Darren ‘Doc’ Wheildon was an AFL cult hero in the early 1990s. photograph alchetron