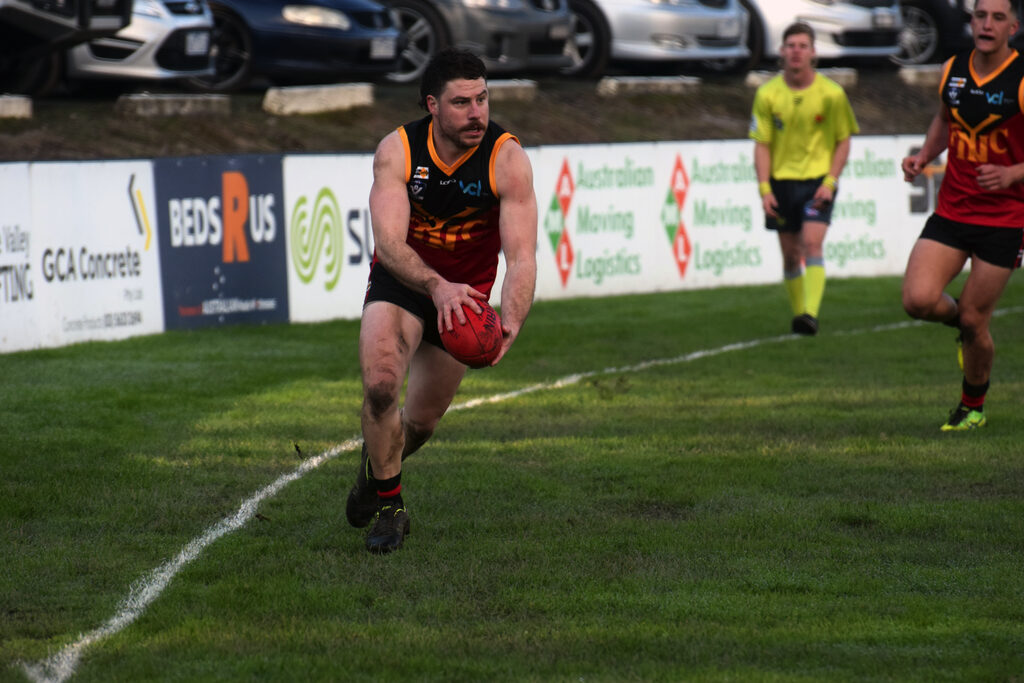 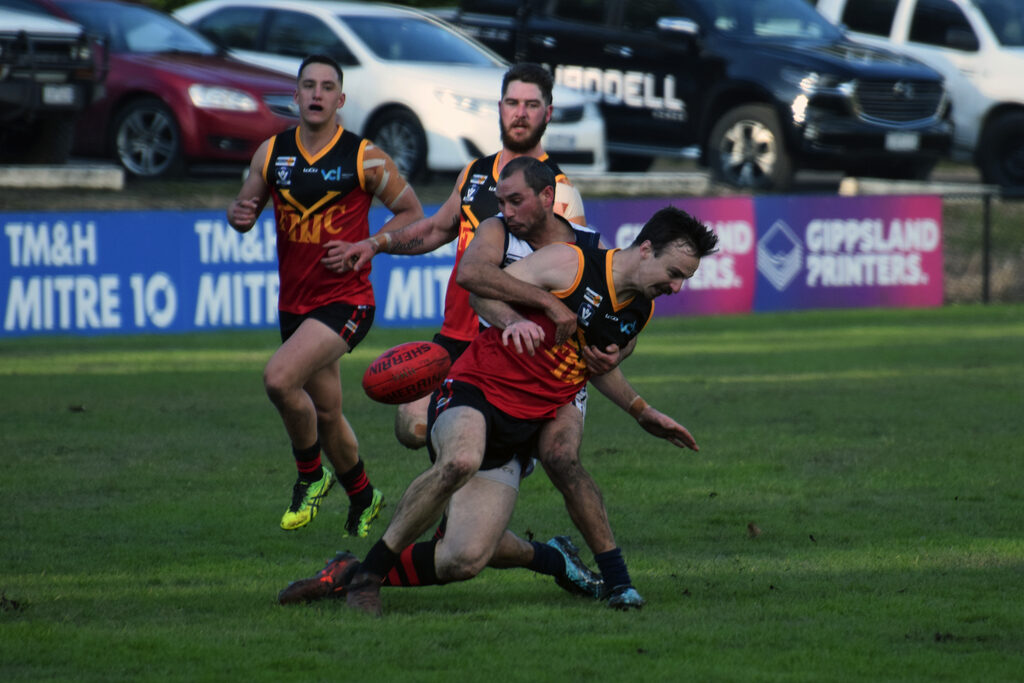 NORTH GIPPSLAND By LIAM DURKIN ONLY one game returned a margin of less than six goals in Round 11 of North Gippsland football. Scoreboard attendants and goal umpires were kept busy around the grounds as some big totals were put up. WOODSIDE continued to amaze. The Wildcats prevailed in a thriller over Yallourn Yallourn North, defeating the Jets on their home turf by three points 11.5 (71) to 10.8 (68). Woodside has well and truly taken its supporters on an emotional rollercoaster this season, as six out of 10 matches have resulted in single figure margins. The Jets and Wildcats could not be separated in the first quarter, but the visitors were able to go into the main break with a handy 11-point lead after kicking three goals to one in the second. Another arm wrestle ensued in the third, with Woodside ahead by three points with one term to play. This margin was repeated as the final siren sounded, with the same team ahead as was some 30 minutes earlier. With talk in the build-up surrounding just how an opposition stops the Jets potent forward line of Dean MacDonald, Mitchell Luck and Keenan Hughes, the Wildcats seemed to curb their influence as the trio finished with seven between them. Hughes did end with four majors, but all things considered, Woodside coach Michael Duncan would have been pleased with the efforts of his players. Cameron Whiteoak was best for the winners, and received good support from Jeremy Morgan and Ben Johnson. Campbell MacInnes, Campbell Staff and Luck did well for YYN. The win takes Woodside to the top of the ladder, where they have a one game lead. GLENGARRY made people sit up and take notice after defeating Heyfield. The Magpies completed their best win for some time, rolling the Kangaroos in relatively easy fashion 12.14 (86) to 7.6 (48). With the home crowd support, Glengarry nudged ahead of Heyfield in the second quarter, and were able to go on with the job from there. Heyfield could not buy a goal in the third quarter, while Glengarry added two of its own to find itself 31 points ahead at three-quarter time. The Magpies went up another gear in the last, and added four goals to complete a sterling 38-point victory. For Glengarry, the win was a genuine scalp over a side who some tipped to be among the competition’s front runners to the premiership in the preseason. Heyfield looks anything but that at the moment, and unbelievably, has not won a game since Round 4. Brayden Woodland, Tyson Birss and Jack Woodland put in good performances for the blue and white. The black and white of Glengarry found its best players in the form of Alex Bermingham, Jackson Hall, Nat Freitag, Spencer Poulton, Layne Hetherton and Hamish Busk. YARRAM solidified itself as a quality side with an impressive win over Churchill. Like Sideshow Bob to Bart Simpson, the Demons are just refusing to go away in season 2021. Yarram led from start to finish against the Cougars at Gaskin Park, with the final scoreboard reading 14.14 (98) to 9.8 (62). The Demons were able to sustain a buffer of around 30 points during the second quarter, which it was able to both build on and manage within the vicinity of for the rest of the game. As the three quarter time siren sounded the visitors held a 62-point lead, which allowed it to get through the last term bruise free. Churchill added four goals in the last quarter to save some face, but the damage had already well and truly been done. Chris Williams put in as he always does for the Cougars and was helped by Jake Roe-Duggan, Michael Diaz and Blake Slater who are all having solid seasons. Yarram’s equivalent of Williams Griffin Underwood was best for the Demons, while familiar faces usually seen in the Demons best were featured again in Keifer Sutherland and Jack Weston. Without taking anything away from Yarram, the Cougars mounting injury toll has been well documented, and a 36-point loss won’t spell the end of the world for the Churchill hierarchy provided they can get some troops back in coming weeks. TTU posted a total more closely aligned with cricket against Gormandale. It was certainly a long day in the field for the Tigers, who chased leather all game and lost by 199 points at Tyers 31.25 (211) to 2.0 (12) A dozen players got on the scoresheet for TTU. Jayden Cutts filled his boots with 10 and Brad Kelleher sent through seven. Mitch Mustoe found plenty of touches as did Ricky Cochrane. While Gormandale no doubt battled hard, the match was as good as gone before the ball was even thrown up. Crazily, the Tigers had eight players double up from the reserves to play seniors, and as if that was not bad enough, those eight were coming off a 177 to nothing scoreline in the early game. Jake Rust, James Columbine, Kodie Owen, Hector Taala, Gavin Swan, Stephen Lewis, Tom Lappin and Beau Williamson were the brave souls to go again, and one can only imagine how they went losing by a combined total of 376 points across two grades. Mitchell Jones, Jarryd Movchan and Jack Burgess got in the best for the Tigers. ROSEDALE thrashed Cowwarr. The Blues got their percentage up for the second week in a row with a 24.12 (156) to 6.4 (40) win away from home. The visitors kicked five goals to none in the first quarter, and from there the margin grew and grew as the game went on. SALE City had the bye.

Eyes up: YYN’s Josh Keyhoe looks for a target as he streams down the boundary. photograph tom gannon