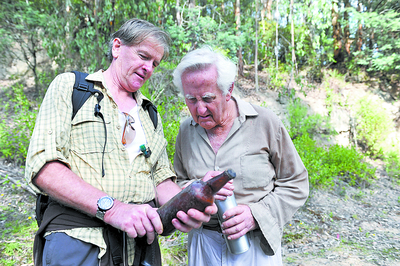 The official opening of the Grand Strzelecki Track this weekend will not only expose bushwalkers to the area’s environmental splendour, but they will experience a journey through the rich history of hardship and struggle in the area.

A hint of the personal stories held by the hills was brought to light recently, with the uncovering of a cluster of vintage beer bottles, forgotten for decades.

While becoming hotly contested souvenirs, the bottles have aroused speculation surrounding their story.

When contractor Kevin Heggen was tasked with environmental clearing on land adjoining the trail for Hancock Victorian Plantations 12 months ago, his team uncovered the secret stash.

“It would’ve only been five or six metres off what is obviously an old homestead site,” Mr Heggen said.

While the 12 long-neck bottles were still capped, they had suffered various degrees of evaporation, and questions began to arise as to why they had not been consumed.

“It was a really interesting find that tickled the fancy of the blokes … one of them even sampled it, but he thought it was pretty rough; I don’t think it got past the tonsils,” Mr Heggen said.

“In my mind, I like the old story about the husband always getting a hard time from the missus,” Mr Heggen said.

“A lot of blokes saw some hard times up here; so to cope he kept (the bottles) stashed next to the driveway, and on the way up, the old fella could go have a drink when things got a bit rough.”

According to HVP databases, the land in question was purchased for forestry around the 1960s, but there is no telling how long the site had been abandoned.

HVP Churchill’s Richard Appleton said the area saw an influx of brave settlers from the late 1800s to the 1930s, with hopes of developing a sustainable farming plot, but proved a futile endeavour for many.

“They don’t call them the Heartbreak Hills for nothing,” Mr Appleton said.

“A lot of properties were subsequently abandoned through the depression years; rabbits and weeds overrun the area, while the land was sold off very cheaply.”

Mr Appleton added his theory the bottles could have been part of a private home-brewing stash.

With each bottle embossed with the head of a large feline-like creature on the shoulder, and ‘Property of Richmond Brewery’ across the bottom, identifying the age and type of beer could help assist with the theories.

Mr Kaldor said it was clear the beers were ‘Richmond Tiger Beers’, a mainstream beer brewed out of the Richmond Brewery from 1928 till 1962, until the brewery was purchased by CUB.

According to bottle markings, Mr Kaldor said this particular find could be dated circa 1940.

“I imagine these bottles would’ve been supplied through one of the local hotels … it was a fairly regular beer, and was always popular in the Richmond area (due to its support from the Richmond Football Club),” Mr Kaldor said.

“A lot of people did home brewing, and these were good solid bottles, so they could’ve been used that way; we could tell if they were all different crown seals.”

Unfortunately the bottle caps were too rusted when found to tell, however Mr Heggen said a more recent discovery on the track last week has entertained questions surrounding the bottles’ fabled history.

“Only 20 or 30 metres from the original site, near an old tip site, we’ve found another cluster of long neck bottles (with different markings) and these were definitely not in the homestead driveway,” Mr Heggen said.

He said he was now not so sure about his original theory.

While some of the Richmond Tiger bottles have been souvenired, Mr Heggen said he would ensure the remaining bottles made it to the Balook and District Residents Association for historical purposes.

One bottle will be set aside for display in the yet-to-be-built Balook Guest House along the track, where bushwalkers can speculate on the history of the fabled farmer’s private stash.