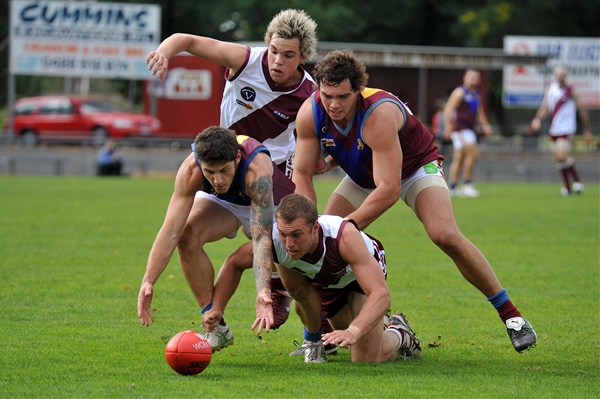 Inaccurate kicking for goal proved costly to Morwell as they failed by eight points to defeat an improved Bairnsdale.

Morwell coach Damien Kerr said it was the worst loss since he had been at the club.

“Considering we had 70 per cent of the play in the second term we just could not put it on the scoreboard and no team can afford to do that,” he said.

Both sides had trouble kicking goals in the first term when it was 2.6 to 1.6 in favour of the Redlegs.

It was a scrappy game for the first quarter, with some poor delivery by the Tigers that gave their forwards little or no chance.

Bairnsdale kicked away in the third quarter, slamming on three goals in two minutes through Mark Sellings, James Gibbs and Nathan Storer to lead by 21 points.

Morwell lost Michael ‘funky’ Duncan and they were in trouble but Joel Soutar lifted his team, kicking the last goal of the third term and the first of the final term.

When Ryan Tatterson goaled after eight minutes the Tigers were in range.

Traralgon bounced back from its humiliating defeat at the hands of Bairnsdale to thump Moe by 65 points.

“Everything we planned went out the window and it was very disappointing the way we played,” he said.

Leongatha ended its 22-match losing streak against Maffra by defeating the side at its home ground.

The Parrots led by a point at half time and then kicked 11 goals to four in the second half to win by 41 points.

Sale withstood a strong comeback from the Wonthaggi Power to win by 14 points.

Ground conditions favoured the Power and more than 105 millimetres of rain had fallen in the town since Wednesday including 18.2 mm on Saturday.

Sale’s inaccuracy nearly cost it the match, kicking 2.7 in the first quarter and 6.6 in the second.

The Magpies were restricted to two points in the third while the Power kicked 4.1.

Shepparton recruits Andrew Guilmartin and Lee Warnett were strong for the Power, along with Daniel Domaille and the return of Earl Shaw gave the Power an edge in the ruck duels.

Yesterday Drouin trailed most of the day against Warragul but unleashed a seven goal last quarter to win by 22 points.