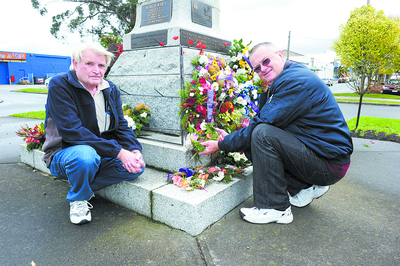 LOCAL war veterans are saddened and disappointed by a “disrespectful act of vandalism” at the Morwell cenotaph hours after wreaths were laid on Anzac Day.

Morwell Returned and Services League president Bruce Jeffrey said infrared cameras in the area picked up images of two young men behaving suspiciously at the cenotaph on 25 April, after nightfall.

“These two young men picked up more than four wreaths from the south side of the cenotaph, broke them up, and scattered them all over the road,” Mr Jeffrey said.

Flowers from the wreaths were found strewn several hundred metres away, in Kennedy and Tarwin streets.

“It is disrespectful to all veterans.”

Mr Jeffrey said among the wreaths desecrated was one laid by a former Vietnam veteran in honour of the only Morwell man killed in the war, Adrian Rich.

He said veteran Ken Answer, who laid the wreath, had gone to the cenotaph the next day to quietly reflect on his own when he discovered the vandalism.