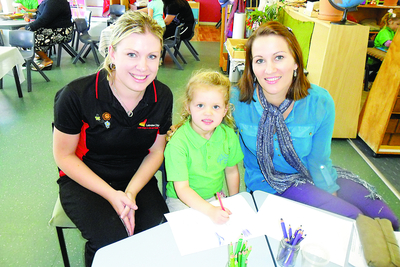 LATROBE City has moved ahead of much of Victoria to pilot extended preschool hours.

Fifteen hours of preschool per week for four year olds began across Latrobe City this term, almost a year earlier than most other areas in the state.

According to Latrobe City child and family services manager Jodie Pitkin, the benefits are already evident.

She said the transition from an increase to 12 hours last year, then 15 hours from the start of this term, had been the culmination of “a long process” for council after it identified the early need to participate in a pilot locally.

All Victorian preschools will be required to offer the 15 hours of early education per week from next year as part of the Commonwealth of Australian Governments’ Universal Access agreement.

Ms Pitkin told The Express council decided to lead the way on increased hours since “we believed quite strongly we had the physical infrastructure to do it”.

“Most importantly though, all research says children who have increased exposure to formal early education services do have better social and educational wellbeing outcomes later in life,” she said.

“So we thought we had a responsibility to do everything possible to ensure kids in Latrobe could access that as soon as possible.”

Though it had been “a very complex” logistical task, council also ensured the increased access was implemented universally across Latrobe and the program was designed to ensure core hours were not affected if any family chose not to access the additional three hours.

“It is really noteworthy that the extension of hours makes kinder a much more enjoyable and positive experience for families,” she said, adding that of the 870 Latrobe-wide enrolments, only one family had chosen to not access the 12 hours on offer up until this term.

“School is 30 hours a week, so doing half as much in the pre-school year seems appropriate,” Ms Williams said.