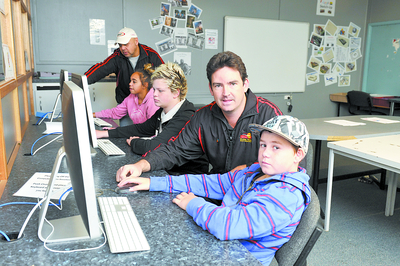 MORWELL’S Koorie College remains in the dark about impending funding changes which could potentially threaten the school’s ability to cater for at-risk indigenous teenagers.

An independent performance review into the Woolum Bellum College, along with three other Koorie ‘pathway schools’ across the Victoria, was called earlier this year after it was revealed the school’s were running at exorbitant teacher student ratios.

However, college principal Matthew Snell said there was no indication how the school will be affected by a possible funding overhaul, which would be informed by the review.

“We don’t know if there will be big changes to my budget and my workforce, so what else can you do then when there isn’t something in place,” Mr Snells said.

“We still haven’t been told we won’t be operating any differently next year.”

The college is a ‘pathway’ school for year 7 to 10 students who have fallen out of mainstream schooling and aims to reintegrate students back into education or vocational pathways.

The school’s performance came under state-wide scrutiny in March when The Age published government funding statistics which said the college received “more government funding per student than any other school in the state” while achieving 56 per cent attendance records.

Peter Fotheringham of education consultancy firm National Curriculum Services, said the review had been completed and delivered to the Department of Education and Early Childhood Development.

The Express phoned and emailed the DEECP but did not receive a response in time of going to print.