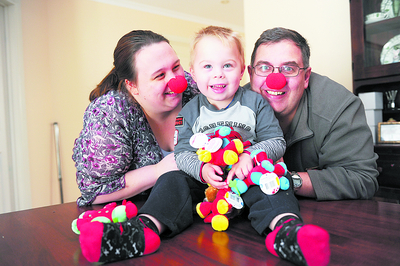 THE agony of losing their children led to a “period of blackness” for Churchill’s Ellerington family after their infant triplets died last year.

However, friends, family and members of SIDS and Kids Victoria helped the family overcome their grief.

In light of their triplet sons’ anniversary this year, the family have decided to give back to the people who stood by them.

“We were feeling a bit lost in the months coming up to our sons’ anniversary and we felt like we needed to do something for the boys,” Cassandra Ellerington said.

“SIDS and Kids do a fantastic job… when we lost the boys we had someone from Melbourne come by to do house visits and kept in touch even after. We decided to do a fundraiser to give back to them and really thank them for what they did for us.”

SIDS and Kids Victoria is a not-for-profit organisation which provides support to Victorian families whose child or children have died suddenly and unexpectedly.

According to Peter Ellerington, the family was “blown away” by the generosity of the local community and other national organisations for their fundraiser.

“We just emailed people saying we couldn’t have a first birthday for our babies and we wanted to hold an event in support of SIDS and Kids,” Mr Ellerington said.

“It’s just been fantastic… chief executives of massive companies have called us asking how they can help… it’s really amazing to see the number of people who go above and beyond. To be honest what you go through (when you lose a child) is just horrible, but to have someone who lets you know that you’re not alone helps a great deal.”

The Ellerington family was provided with materials and information to help them through their grief, and according to Ms Ellerington, “SIDS and Kids Victoria has been great in keeping us sane and getting us through the hardest times in our lives”.

“They need all the support they can get so they can help others just like they have helped me and my family,” she said

The Ellerington family will host a charity casino night on Saturday, 7 July, at the Morwell Italian Australian Club from 7.30pm.