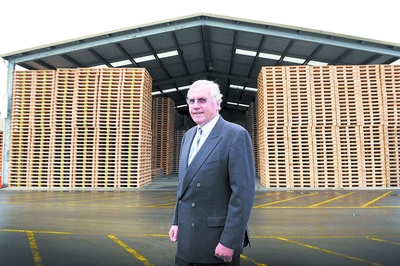 In times of widespread business uncertainty, people need to innovate, advocate and improvise.

That has been the approach of Morwell pallet manufacturer and recycler Fisher’s, whose forward thinking has attracted the latest instalment of State Government industry funding support.

“If you are going into business and you are going to succeed, you’ve got to have a vision, and a determined goal which you can work to achieve,” owner manager Lewis Fisher said.

In a market dominated by national industry heavyweights CHEP and Loscam, the 32 year-old family-run business, which employs 20 locals, has proven capable of holding its own on an international scale.

Maintaining a major industrial contract with Australian Paper for more than 15 years, Fisher’s supplies up to 10 semi-trailer loads worth of pallets to Australia’s largest manufacturer of office paper supplies every week.

But according to Mr Fisher, in today’s business climate, a business cannot take things for granted.

“You always need to be moving to the next stage,” Mr Fisher said.

After becoming the sole certified Australian producer of Euro-pallets, the industry standard for pallets on the international market, Fisher’s moved in for its next target; landing a national contract to supply home products company IKEA 12 months ago.

“They certainly didn’t come to us on that one; the key is adapting yourself to join new and emerging markets; we expanded our offerings and took it to them,” Mr Fisher said.

While pallets have been the staple diet of business contracts, Mr Fisher said the industry was beginning to move away from traditional chemicals used in wood treatment, and with the new treatment plant, Fisher’s would be leading the charge in catering for the emerging industry demand.

“With the solvents we were using, we were emitting about 50 tonnes of pollutant per month, but we’ve already made the transition away from that, and have just about completely phased out all our solvent use,” Mr Fisher said.

He said the era of solvent-based treatments had run its course, environmentally, practically and economically, and water based treatments were the next frontier for the industry.

“You’ve got to stay with the game, or get left behind, whether you are in the Valley or not.”