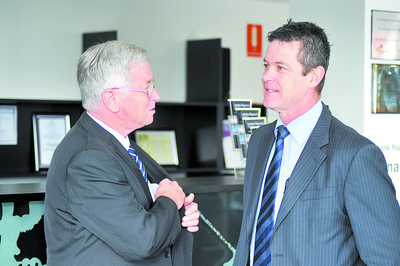 LATROBE City Image Strategy is an opportunity to say “look at us” according to Latrobe City Mayor Ed Vermeulen.

This week, State Member for Morwell Russell Northe announced $50,000 in funding towards the $100,000 Latrobe City Image Strategy, a five-year sustainable marketing strategy, which would explore how Latrobe City, as a brand, could be improved through strategic marketing and relationship development.

With the aim to prove the Latrobe Valley offers more than brown coal, Cr Vermeulen said the strategy would demonstrate the livability of the region by improving its identity.

“We are competitive and advantaged by the landscape and our people, we need to project that to people. This will give us the opportunity to say ‘look at us’,” Cr Vermeulen said.

“This is very important to allow us to align perception with reality, and the reality of Latrobe is that we are diverse and resilient with many many advantages.

“We will be able to say ‘look at who we are, look how diverse we are and look at our aeroplane factory’.”

Mr Northe said the strategy would better publicise Latrobe City’s strengths in preparation for the transition to a low carbon emissions future.

“With the introduction of a carbon tax and exploration of new products and markets for brown coal, the time has come to reorient Australian perceptions of the Latrobe Valley as a vibrant, diverse economic centre,” Mr Northe said.

Echoing those sentiments was Monash University Gippsland public affairs director Tim Grainger, who said the Latrobe City Image Strategy announcement was timely given the changes the region was likely to face.

“While Latrobe should be rightly proud of its essential role in powering Victoria, we cannot forget the many other attributes our region offers,” Mr Grainger said.

“Education, renewable energy, manufacturing and food production are just some of the emerging industries that will help us remain prosperous and sustainable.”

However, according to Destination Melbourne chief executive Chris Buckingham, a successful campaign would be dependent on residents backing the “image”.

The former Moe Development Group chairperson, who has worked on a previous Latrobe City campaign encouraged council to “forge their own course” with their marketing campaign.

“This means council are willing to invest in the future and start the conversations that count,” Mr Buckingham said.

He said Newcastle, Geelong and Bendigo had all achieved a successful regional rebranding but a “team-based” approach was critical to succeed.

“I’m sure there has been unsuccessful attempts but the thing here is to focus on what is possible, not what is not,” he said.

The research phase of the Latrobe City Image Strategy project is expected to be completed in October 2012.