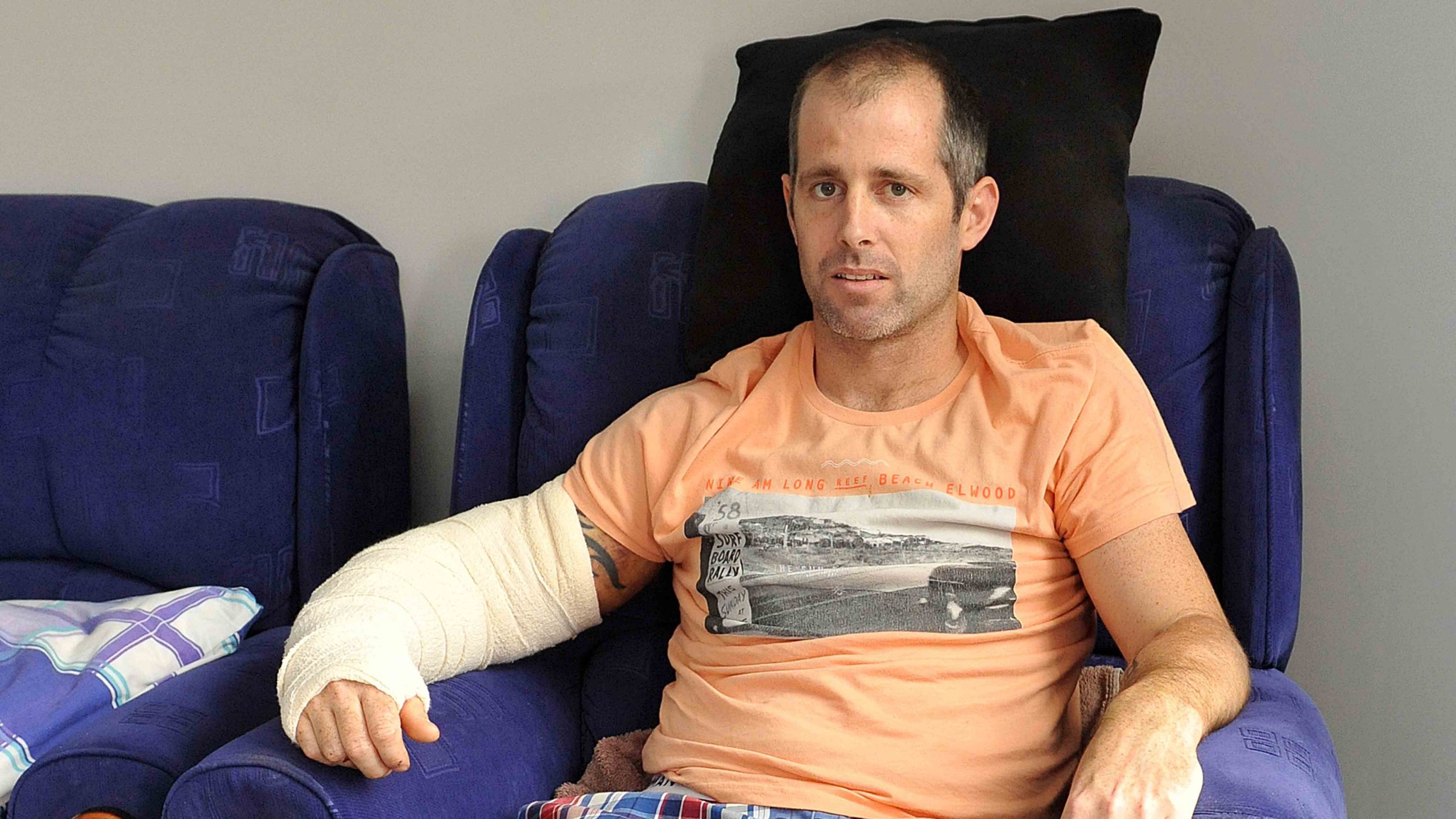 IT only took a split second for a morning bike ride to turn into disaster for former Australian Football League star and Morwell resident Troy Makepeace.

Mr Makepeace sustained extensive injuries when his bicycle and a motor vehicle collided on Tuesday, 28 August on Mattingley Hill Road, near Loy Yang.

The 33 year-old was rushed to Latrobe Regional Hospital and later airlifted to the Alfred Hospital with a dislocated and fractured right elbow, two stable fractures in his spine, a smashed radial head in his forearm which required replacement and a haematoma on his right side spanning from ribcage to knee.

Mr Makepeace was discharged last Thursday after eight days in hospital and has returned home for recovery.

The former North Melbourne Kangaroos player was cycling with his brother and Latrobe City Cycling Club member Paul Makepeace when he was hit from behind by a passing car.

“We were at the end of our ride and it just happened,” Mr Makepeace said.

“I remember pretty much everything, the only thing I don’t remember was from impact to landing on the ground.

“It was shock; initially it was ‘what the hell was that’ and I was winded so I was trying to catch my breath, then obviously the pain kicked in.”

Mr Makepeace said it was fortunate his brother and several others were on hand to keep him calm and still after the accident until an ambulance arrived.

The local football hero had only recently taken up cycling; getting back on the bike is far from his thoughts in the early stages of recovery.

“It’s an interest I’ve got and my brother got me into it,” he said.

“It was actually the first ride I’ve been out on with him (Paul) and his mates; my brother cannot get the sound of the impact out of his head.

“Obviously I’ll be hesitant (about cycling)… it’s going to be a work in progress so we’ll see what happens but I’m not thinking about that yet.”

Mr Makepeace said the incident served as a warning to cyclists and motorists alike heading into summer and the cycling season; to be aware and vigilant on the road.

“We didn’t do a lot wrong; we had our lights on and were riding on the side of the road single file and it’s just an awareness thing for drivers,” he said.

“You’ve got to be really careful, we’re coming into cycling season so it’s going to be more prevalent with cyclists on the road.

“Keep your eyes on the road. It only takes a split second for something you don’t expect to pop up in front of you.”

“On rural roads we have massive potholes and the edges of the surface can be uneven; the end result is that the cyclist needs a little extra room when being overtaken,” Sgt Wilson said.

“Riders that are riding on rural roads are generally subjected to traffic approaching from behind and Troy Makepeace’s collision is probably a good example of what can happen when a driver isn’t paying attention to the presence of a cyclist.”

A 2012 study conducted by Monash University’s Accident Research Centre on behalf of Baw Baw Shire Council, found the state of road surfaces and driver attitude were among the leading concerns for on-road cycling safety.

The report’s recommendations included an education campaign to correct current misinformation about driver and cyclist responsibilities and a greater police enforcement of dangerous driving.

Sgt Wilson said with more cyclists on the road than ever it is imperative to employ proper safety measures and be aware of cycling road rules.

“Cyclists have to do the right thing as well, if they’re obstructing traffic they need to think about whether they should be two abreast.”

Sgt Wilson also identified driver inattention and distraction as an area of concern, and warned the consequences of an accident resulting from use of phones, navigation systems and the like could have serious consequences beyond the $182 fine and three demerit points.

“You may be charged with careless driving up to culpable driving,” he said.

“The most important thing is a helmet,” Mr Tunks said.

“I see so many people, kids particularly, riding around without helmets and I can testify that it saved my life.”

The investigation into Mr Makepeace’s accident is ongoing and witnesses are encouraged to phone Sgt Wilson at Latrobe Highway Patrol on 5127 2222.