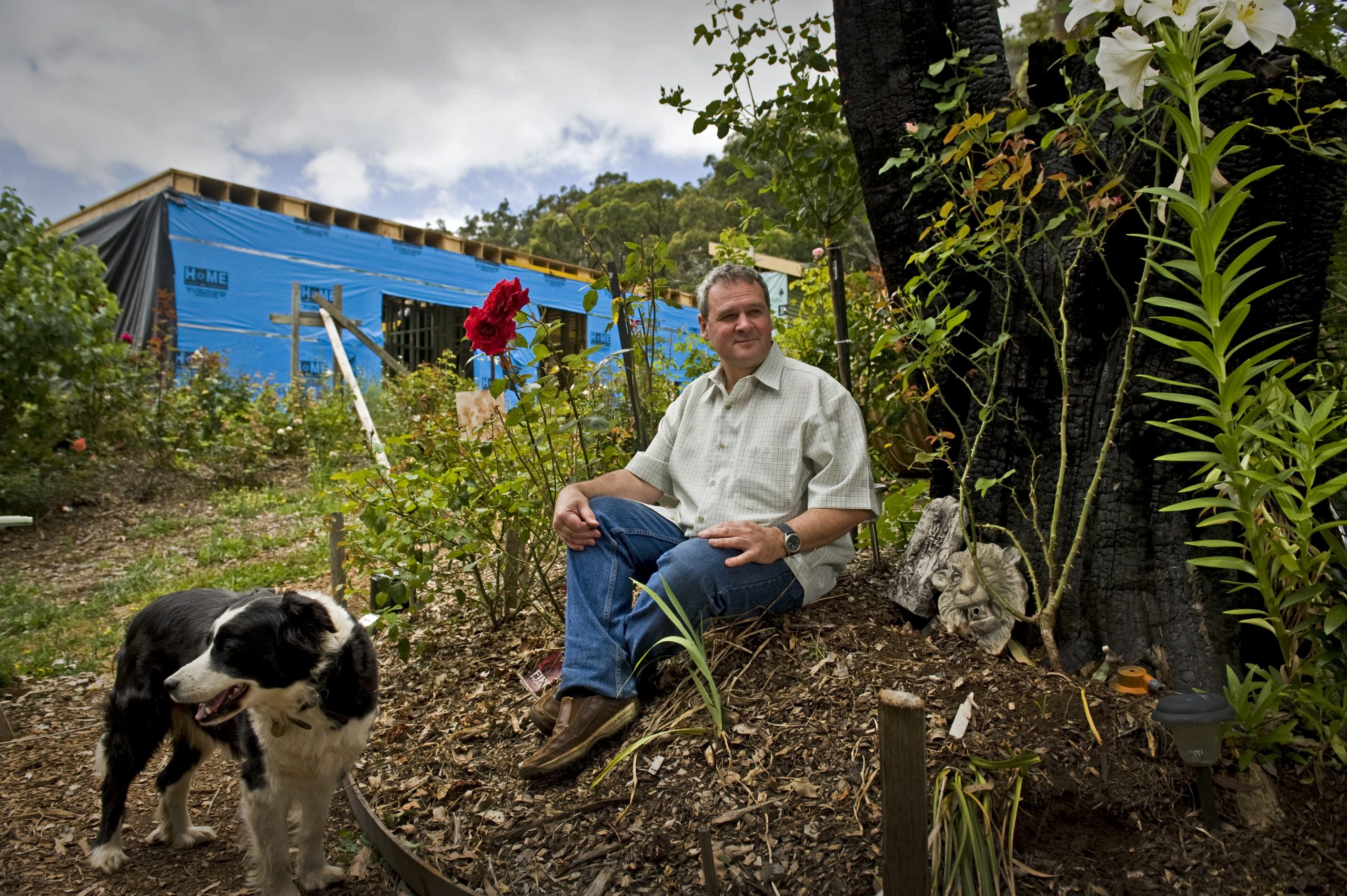 A place of respite, refuge and beauty.

That’s what Peter ‘Ollie’ Olorenshaw’s new home will be to him.

The light, bright construct is designed for the avid gardener to have a constant view of the glorious landscape that surrounds him in Callignee, a stark contrast to his home of the past four years, where Ollie shut out the environment.

In a shed paid for by workmates, Ollie chose to live without windows.

“I was in siege mentality,” Ollie said.

“I didn’t want to be burnt out again and windows are your weak point. Whatever I accumulate, I want to be able to keep.”

Apart from some precious books, photographs, camera gear and personal documents which he managed to get off the mountain, Ollie lost everything on Black Saturday.

With his son Tim, Ollie returned to his property on 7 February 2009 to defend their home. Embers were lit up like fireflies, Ollie remembered.

“Normally in a fire it rolls in front of itself, well this was turning like a washing machine.”

Spotfires lit up and Ollie cowered on the front driveway against the radiant heat.

“It was like someone had left a fan-forced oven on all day, opened the door and that was what was blasted on top of you,” he said.

Ollie and Tim prepared to make a stand inside the house. The fire impacted and blew in the windows and they waited for the front to pass. They then took shelter at a concrete tank, where they waited for two hours while their home burnt to the ground.

“My son had sustained burns on his ankles wrists and face and the water bottle beside my feet started melting. I thought ‘hmm, that’s a bit hot’. That two hours was forcing yourself to breathe, the smoke was that acrid.

“We couldn’t see what was on fire around us and we could hear the crackling and the burning, the trunks of trees. We were expecting a tree to fall back across the tank.

Ollie and Tim decided to try to sleep by the tank in what Ollie described as the most uncomfortable night of his life.

“I thought Tim had gone into shock because he started to shake really violently. So I comforted him and said all the parental platitudes and he said, ‘I’m not in shock dad, I’m just bloody cold’,” he said.

The water-soaked towels, which helped the pair breath in the ferocious fire, had now become a burden in the cool change.

In the surreal irony of their predicament, Ollie and Tim walked over to a burning mass of embers, which was once their wood pile, to keep warm. As the light returned to Callignee, it became clear to Peter he had lost every piece of infrastructure on his property.

But opening up all the gates had ensured the survival of the beef farmer’s herd, which took refuge in the property’s dam.

“I’ve never seen animals like it. They were bleeding from every orifice you can think of, eyes, mouth, nose, ears, anus, teats, they were just bleeding, weeping.

“I thought I was going to have to destroy the herd. But animals bounce back really quickly. They healed themselves and in three or four days they were reasonably content, although very hungry.”

It was his herd’s survival that influenced Ollie’s decision to rebuild.

“I freighted those cattle off to a facility west of Warragul. It was my philosophy, if it was good enough for them to survive the fires , then I needed to do something to help them survive, rather than send them off to the slaughter.

“It’s a very expensive process but I don’t regret it because it’s the only thing I’ve got from the farm that’s original. I’ve still got many of those cows.”

Ollie admitted there were times when he thought of walking away, but the “country boy” couldn’t imagine living in town, and is focused on reclaiming the status of “best beef farmer on the mountain”.

“These are tough country people and I suppose that’s another reason I stayed,” he said.

For the past three-and-a-half years Ollie has laid awake at night designing a new home that he’s determined will survive the next bushfire.

“For country people to live where they are they need to have it firmly in their mind that they will be impacted by fires,” he said.

Masonry walls on a concrete slab, fire-rated windows, a fire suppression system on the roof and gutters, internal mister system and fire hoses will all make up the house which Ollie hopes to get to lock-up stage by Christmas.

“It will be a place of solitude where I can sit and contemplate what we’ve been through and what my future holds,” he said.

Ollie firmly believes in a property-owner’s right to choose whether to stay and defend their home, but he urged those who plan to leave, to go early.

“Whether or not it’s a code red day or whatever, in my mind, is irrelevant. If you’ve made the fire plan to say ‘I’m going’. Well go. Two days early. But if you’re going to stay, that’s your commitment and don’t ever waiver from that. Because people broke that commitment up here and around Victoria and they perished as a result,” he said.