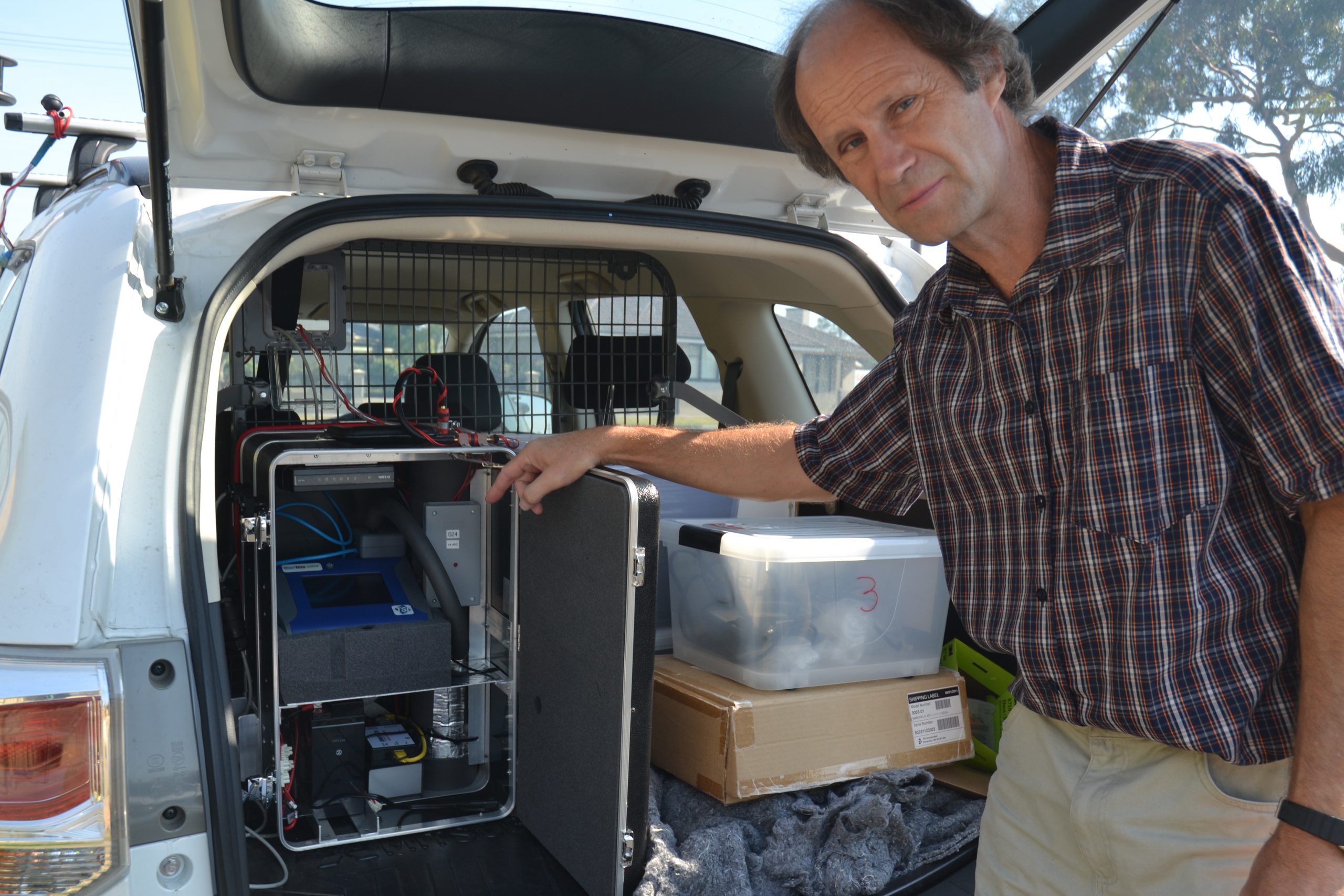 “This isn’t good … we really shouldn’t be breathing this.”

That was the assessment of visiting Tasmanian Environment Protection Authority expert John Innis on Tuesday, as he prepared for a media interview next to the Morwell Centenary Rose Garden.

Mr Innis was standing next to an EPA marked monitoring vehicle, in which a laptop on the passenger seat was feeding back alarming real-time levels of microscopic air particles – referred to as PM 2.5 – picked up in the coal ash floating about the neighbourhood.

Renowned for their ability to penetrate deep within the lungs, national advisory levels stipulate the reporting limit for PM 2.5 sits at 25 micrograms per cubic metre over a 24 hour period.

Mr Innis’ laptop was at that moment reading in excess of 400 mg/m3.

Having already relocated once from near the Morwell bowls club, the group decided to shift again to an area in Morwell’s north, where the air was noticeably clearer to allow the media interview to proceed.

“We’ve often been seeing 800 micrograms per cubic metre here – that’s some of the highest readings we’ve ever seen from an ongoing incident,” Mr Innis said.

He said a reading of 1500 micrograms had been recorded over the weekend.

A three-day tyre depot fire in Tasmania was the only time Mr Innis could recall PM 2.5 readings at this level.

A monitoring trip out to Glengarry on Monday (20 kilometres from the Hazelwood fire) recorded 150 mg/m3 – a revelation Mr Innis said was “quite surprising”.

While PM 2.5 monitoring commenced in Morwell on 12 February, three days after the Hazelwood fire started, hourly readings have only began making their way to the EPA’s public website since Monday afternoon.

A World Health Organisation report ‘Health effects of particulate matter’ released last year concluded there was “no evidence of a safe level of exposure or a threshold below which no adverse health effects occur”.

In the same year a study funded by the European Union found prolonged exposure at all levels of particulate matter increased the likelihood of lung cancer.

While EPA, along with the Department of Health, have deemed the microscopic particles within the coal ash blowing across the region the area of greatest concern, Victoria’s Chief Health Officer Rosemary Lester has remained adamant there was no evidence to suggest short term exposure to PM 2.5 would lead to long-term health issues.

“At this stage we are still focused on the short-term impact of the coal dust, and there is no evidence to show (short term exposure) can affect your health adversely.”

While Dr Lester denied suggestions there was a “complete knowledge gap” on the long term impacts of PM 2.5 exposure, she said the government was still seeking national and international advice as to what constituted ‘short-term’ exposure.

However she reiterated previous warnings against vulnerable people exposing themselves to the coal dust.

“We’ve been saying this all along – these conditions can cause problems for people with pre-existing health conditions and those people need to seek respite,” Dr Lester said.

“The question here certainly is around how long is ‘long-term’ – for the bean counters in the Department of Health that might be 10 years, but for Morwell residents, who have had a history of exposure to power station emissions already, that might only be a month before the effects of particulate exposure become profound,” Dr McCubbin said.

“Theoretically some of these particles are small enough not only to go deep into your lungs, but into your bloodstream and go anywhere, but this is just a whole new area of science where there is still a lot of work that needs to be done.”

The State Government has distributed 25,000 particulate masks to Morwell residents this week, which it maintains can filter PM 2.5 if sealed properly on the face.

However  residents with breathing problems have been advised to consult their doctor before using the masks, as they restricted air flow.

Acknowledging local PM 2.5 readings had greatly exceeded those of heavily polluted areas such as Beijing, Dr Lester said Morwell’s levels were of no comparison as local particulate concentrations were only peaking in short bursts.

“Beijing is like that all the time, but this two week period is still well within the realm of ‘short term exposure’ – despite what it might feel like right now, Morwell residents are not living in Beijing,” Dr Lester said.

Dr McCubbin said due to the unprecedented nature of the coal fire incident, an extensive inquiry needed to be conducted into the long term health impacts on Morwell residents.

“The Department can say no harm is being done in the short term, but they need to be able to prove it, and really have to conduct a detailed health study on the population and surrounding areas after this is all over,” Dr McCubbin said.