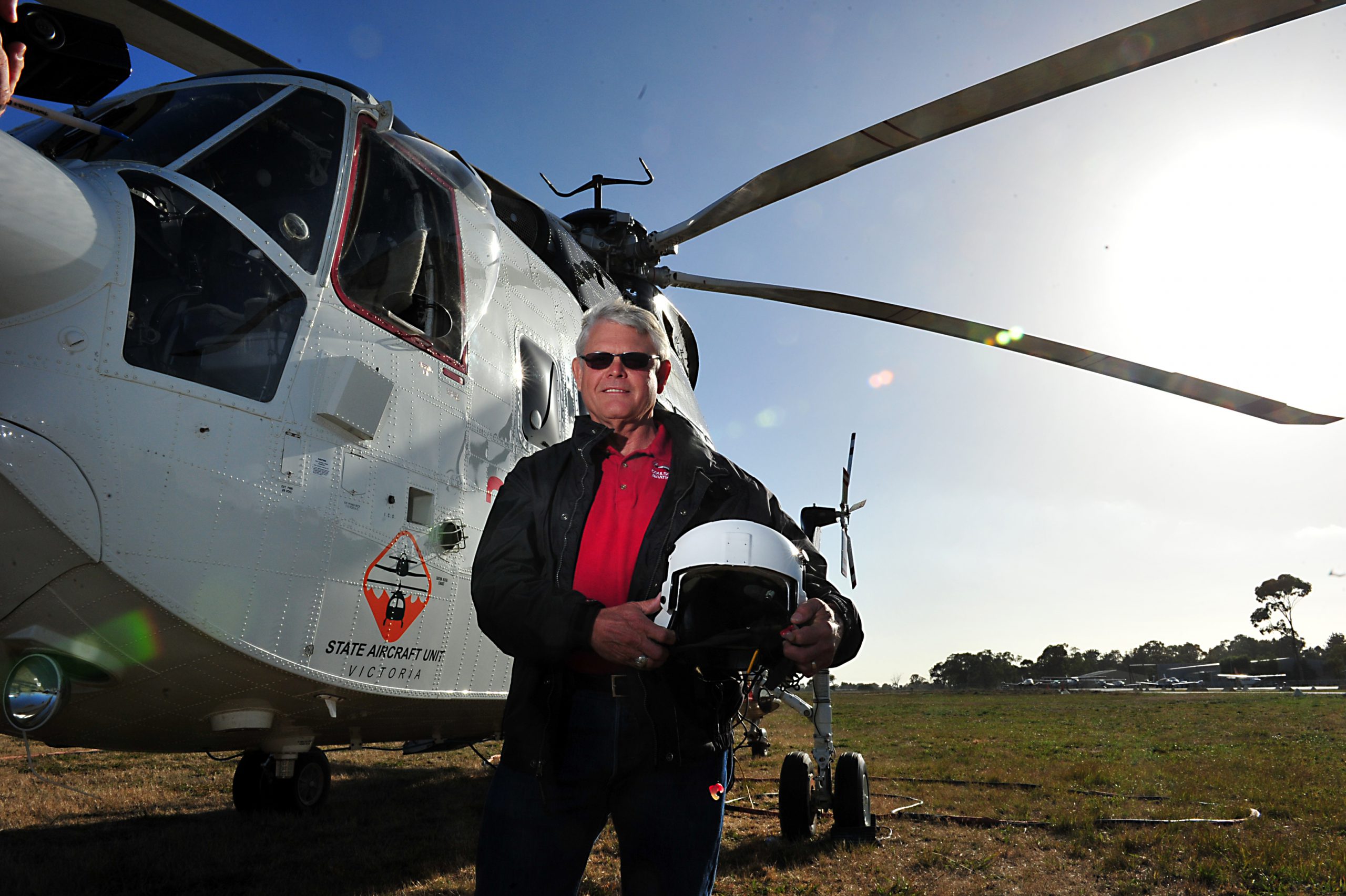 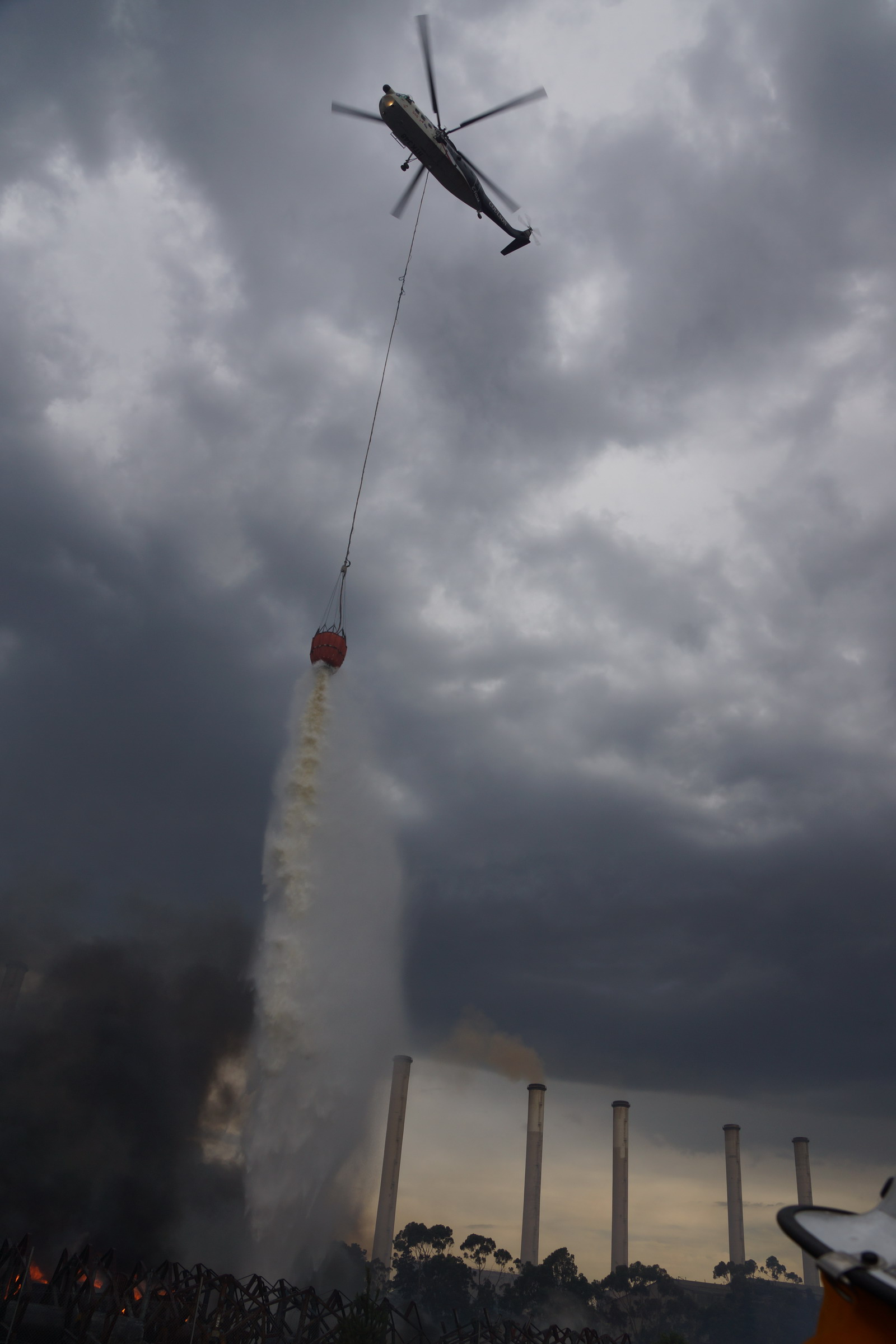 When Canadian helicopter pilot John Coughlin first flew over the Hazelwood mine fire in its first week, he thought he’d been assigned to the Chernobyl disaster.

“I’ve fought a lot of fires in my time, but I’ve never fought anything like this before,” Mr Coughlin said.

Mr Coughlin is one of a rotational crew of eight pilots at the controls of the two six-tonne Sikorsky S-61s, which have developed a familiar presence over Morwell’s skylines, scrambling daily to water bomb the open cut fire.

As chief pilot for Coulson Aviation – a Canadian company contracted to provide air support during the Australian bushfire season for the ninth year running – Mr Coughlin and his team were called upon during the first week while fighting fires near Marlo.

“Our first impression was ‘what are we getting involved in here’ – it looked look it was Chernobyl,” he said.

“There was just a huge amount of fire in the mine – the whole thing was alight and it looked like an impossible task to get this thing out.

“The first bucket or two we dropped would just turn into steam, and we were wondering, are we really being effective here?”

Following the release of infra-red scans after the first week detailing progressive extinguishment gains, he said pilot morale lifted along with the rest of firefighters on the ground.

With a cockpit window often required to be open, the work was smoky and sweaty, with shifts lasting up to six and a half hours, and pilots often forced to wear their own masks.

“At first it took a while to work out what was going on and what was the best way to fly through this thing – there were a number of interesting concerns we had at first – particular the toxicity of the smoke,” he said.

“When the rumours of firefighters going to hospital with carbon monoxide exposure started coming through – we were pretty concerned about that.

“But probably by about our third day we worked out what our no-go zones were – and we’ve tried to keep out of the smoke as much as possible.”

Drawing water from water dams along the mine floor at 400 litres per scoop via a lightweight ‘Bambi’ bucket attached to a 50-metre line – the S-61s have been a vital tool in the multi-agency firefight.

However, Mr Coughlin said 90 per cent of the Sikorsky’s water bombing duties were focused on cooling ground and clear-ways for the installation of sprinkler pipelines, fire truck access, and excavation equipment.

“The ground crews needed us to be dropping water at pretty precise locations along the batter edges, and when you’re doing that in heavy crosswinds you’re really struggling to adjust for it,” he said.

“The flying was pretty intense sometimes.”

In the context of the Hazelwood firefight, Mr Coughlin said the ability of the S-61 to extract water from a 50m height made it a more effective weapon than the iconic ‘Elvis’-style air crane initially scrambled to the firefight – which used a six-metre long ‘snorkel’ to pull water.

“When you are drawing out of the water catchment ponds and dumping straight onto the coal batters – it’s draining back into the pond with even more contaminants in it, which continually makes the water worse in quality,” Mr Coughlin said.

“If the air crane was pulling out of that, it would be hovering much lower and it would be splashing toxic water all over the helicopter and the cockpit, which you don’t want.”

On Tuesday alone, Mr Coughlin and his co-captain had conducted 97 drops in one shift from a single S-61.

With the firefight now focused on a number of remaining hotspots on the mine floor, Mr Coughlin said to have gotten to this point has been a massive coup for the entire operation.

“It’s been a learning experience for most of us – I think the whole group involved has done an amazing job – all fires have a level of complexity – but this has just had so many people involved,” he said.

“It will be one of the more memorable seasons we’ve had here – it’s been a very unusual situation.”