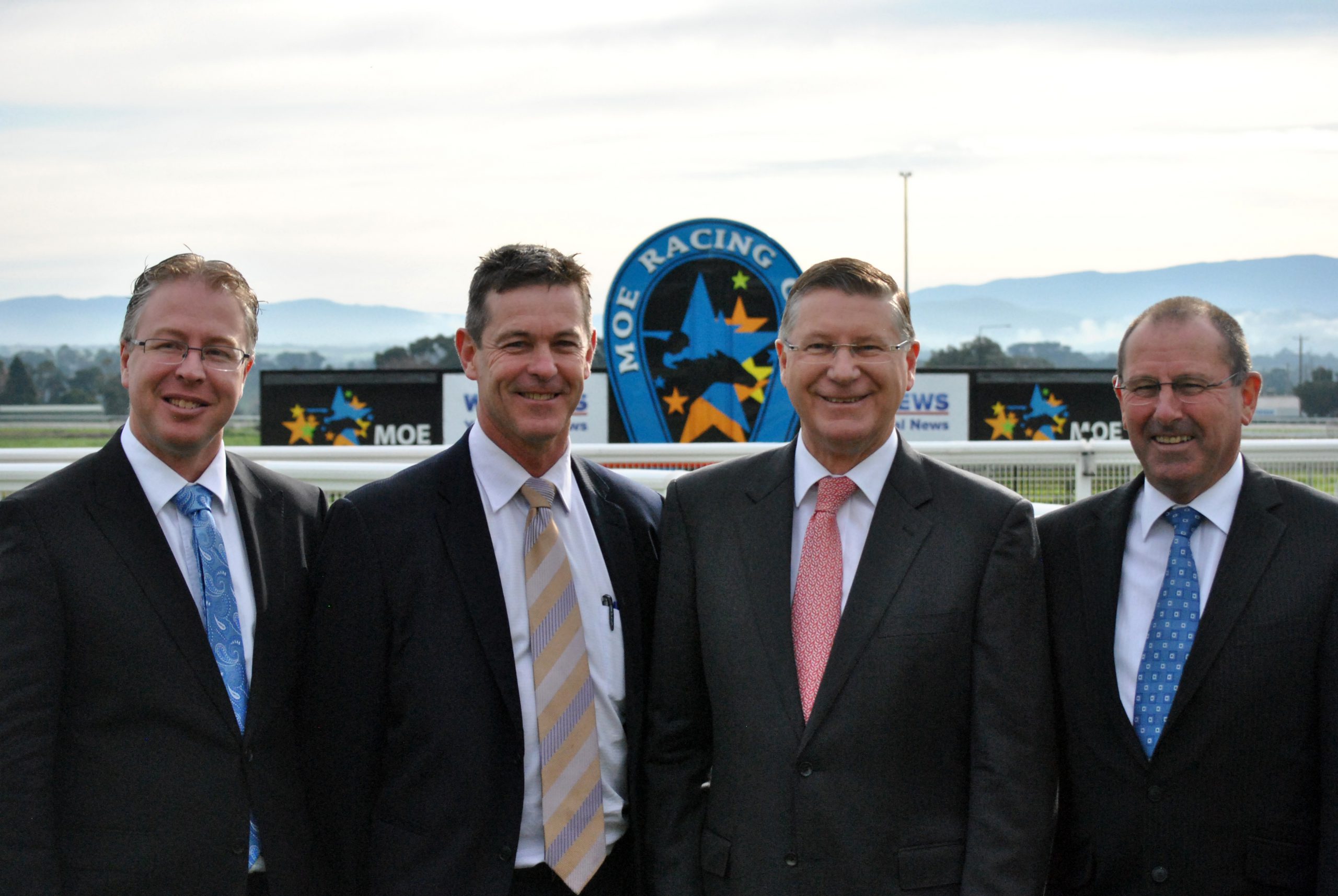 RACING is coming to the big screen in the Latrobe Valley, following the announcement of an “absolutely massive” permanent video panel to be installed at Moe Racing Club.

A swimming pool-sized 62 square metre screen is set to be erected on the infield of the racecourse, in front of the grandstand, replacing the 40m2 ring-ins currently used at the track on racedays.

Described bluntly by Premier Denis Napthine as a “huge, huge, big screen” in his funding announcement at MRC last week, the asset is set to be in place in time for the return of the Moe Cup in October.

Dr Napthine said the State Government’s $131,300 backing of the $263,000 screen was reflective of Moe’s new standing in the industry following a $4.5 million track redevelopment.

“Moe Racing Club is a great racing centre and it’s certainly the central point for racing in this region, but it’s also a great training centre with over 20 trainers and significant employment of hundreds of people,” Dr Napthine said.

“It’s a great economic driver for jobs and opportunities here in Moe, but also a vital part of racing in regional and rural Victoria; indeed Moe is one of the leading regional racetracks and training centres in Australia.

“Modern racing now needs great track and great facilities and Moe has certainly got that… the big screen makes all the difference, it will be worth coming to see in itself.”

Moe will become one of just four country racing clubs to install a permanent big screen, which will be used to stage a range of community events.

MRC chief executive David McKinnon said it would also be utilised as a live site for the events such as the Commonwealth Games, Soccer World Cup, Bathurst, Australian Football League grand final, and carols by candlelight.

“It will significantly enhance the patrons’ experience during the races, but also for the club it’s a huge win for the local community as we plan to have a lot of events with the big screen,” Mr McKinnon said.

The club has been working toward this goal for about six years, and will fund the balance of $131,700 to complete the project.

While McKinnon said there were still things “on the wishlist”, namely upgrading the existing grandstand, the new infrastructure would further cement the club’s rapidly-growing reputation in the industry.

“As for now this will stand us apart from a lot of other communities and racing clubs,” Mr McKinnon said.

“We just want to pay tribute to the Napthine government, which continues to support regional projects… and our local member Gary Blackwood who always helps get these things over the line.”

The screen will be constructed by a Brisbane company and installed by local contractors.