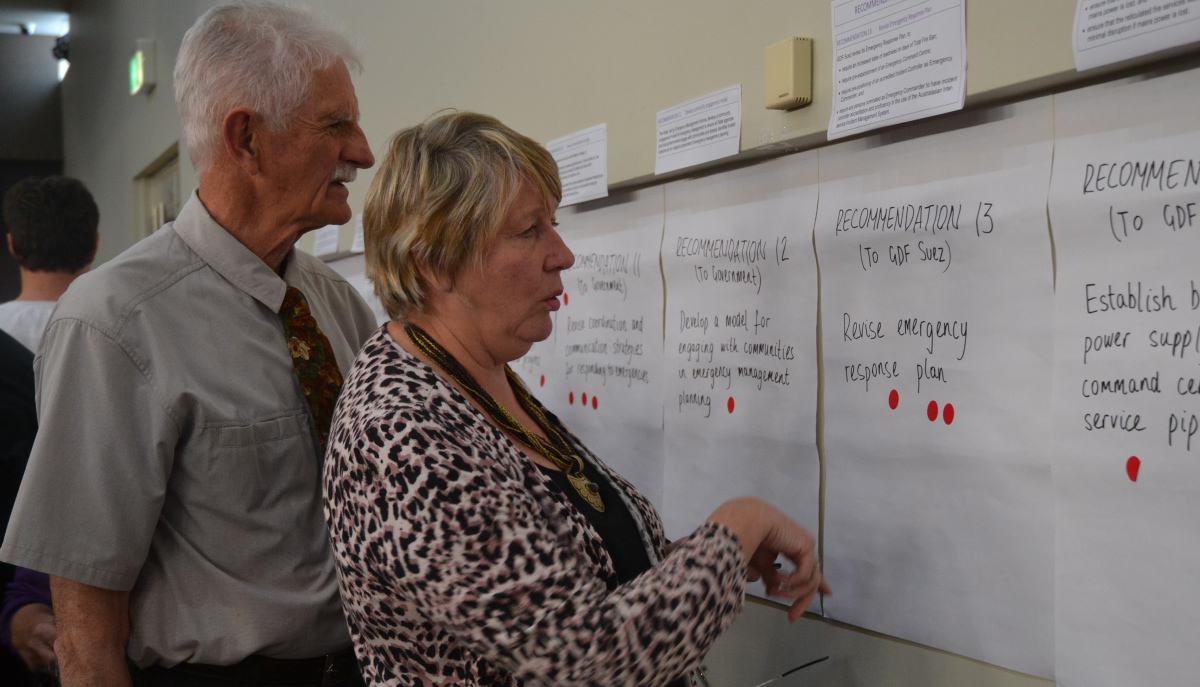 RELATED COVERAGE: Mine Fire Inquiry not possible to reconvene: Ryan

UNLIKE the 2009 Churchill fire which claimed 11 lives, one of the few blessings in the Hazelwood mine fire disaster was the absence of death.

But Voices the Valley – an activist group set up during the blaze – has probed research indicating smoke from the 45-day coal fire in February and March coincided with an increase in the local death rate.

Queensland University of Technology Associate Professor Adrian Barnett has estimated an 89 per cent probability that the death rate was 15 per cent higher in the period of the fire in the neighbouring four postcodes of the open cut mine – Morwell, Churchill, Moe and Traralgon.

Births Deaths and Marriages data shows the total deaths between February and June for the postcodes was 285 – compared to a 2009-2013 average of 239.5.

Associate Professor Barnett, a statistician who specialises in air pollution and related health aspects in Australia, the United States and China said he was not surprised by the data, given “prior knowledge that air pollution is a killer”.

He said the data warranted a thorough investigation and the sooner this was done the better.

“We need to examine cause of death to see if they were related to conditions we know to be associated with air pollution such as respiratory or cardiovascular disease,” Associate Professor Barnett said.

“We need to see where people were living and what they were doing prior to their deaths to determine their level of exposure.”

Professor Barnett said it would also be useful to know if they were showing symptoms before their death and if medical assistance was received.

“If you’ve already got existing diseases, are diabetic, you’ve got lung diseases or your lungs aren’t working as well as they could be, you’re more at risk. But healthy people are still at risk if they get a high enough dose (of air pollution),” Professor Barnett said.

He explained the difference between bushfire deaths and air pollution-related deaths was public perception.

“If somebody’s killed by fire, it’s obvious, there’s marks on the outside, but if someone is killed by smoke, all the damage is internal and they die from something like a heart attack. It’s harder for the public to draw the line between the two, but really it’s the same.”

Voices of the Valley president Wendy Farmer said the data followed the group’s own investigations after noticing an increase in “sudden death” notices in The Express during the mine fire.

The group then audited six years of back issues at the State Library of Victoria, before accessing the Births, Deaths and Marriages data the day after the Hazelwood Mine Fire Inquiry handed down its recommendations.

“To think that we’ve had 11 deaths, imagine if it happened in a bus accident? We would be thinking how can we prevent this from happening again?” Ms Farmer said.

“What scares us about the Births, Deaths and Marriage’s data is the percentage of people dying is quite high with an increase in people that have gotten sick from the fire, including heart attacks and aneurisms.”

Ms Farmer said while the evidence was less clear, the group believed the elevated death rate in subsequent months may also be attributed to the mine fire.

“This is based on first-hand accounts of people’s health deteriorating after the fire, and this leading to premature death,” Ms Farmer said.

“Our evidence adds further weight to the inquiry’s recommendations and proposals regarding protecting the safety of local residents.”

The Births, Deaths and Marriages data had been passed on to the Hazelwood Mine Fire Inquiry, the Victorian Department of Health and submitted for a coronial investigation.