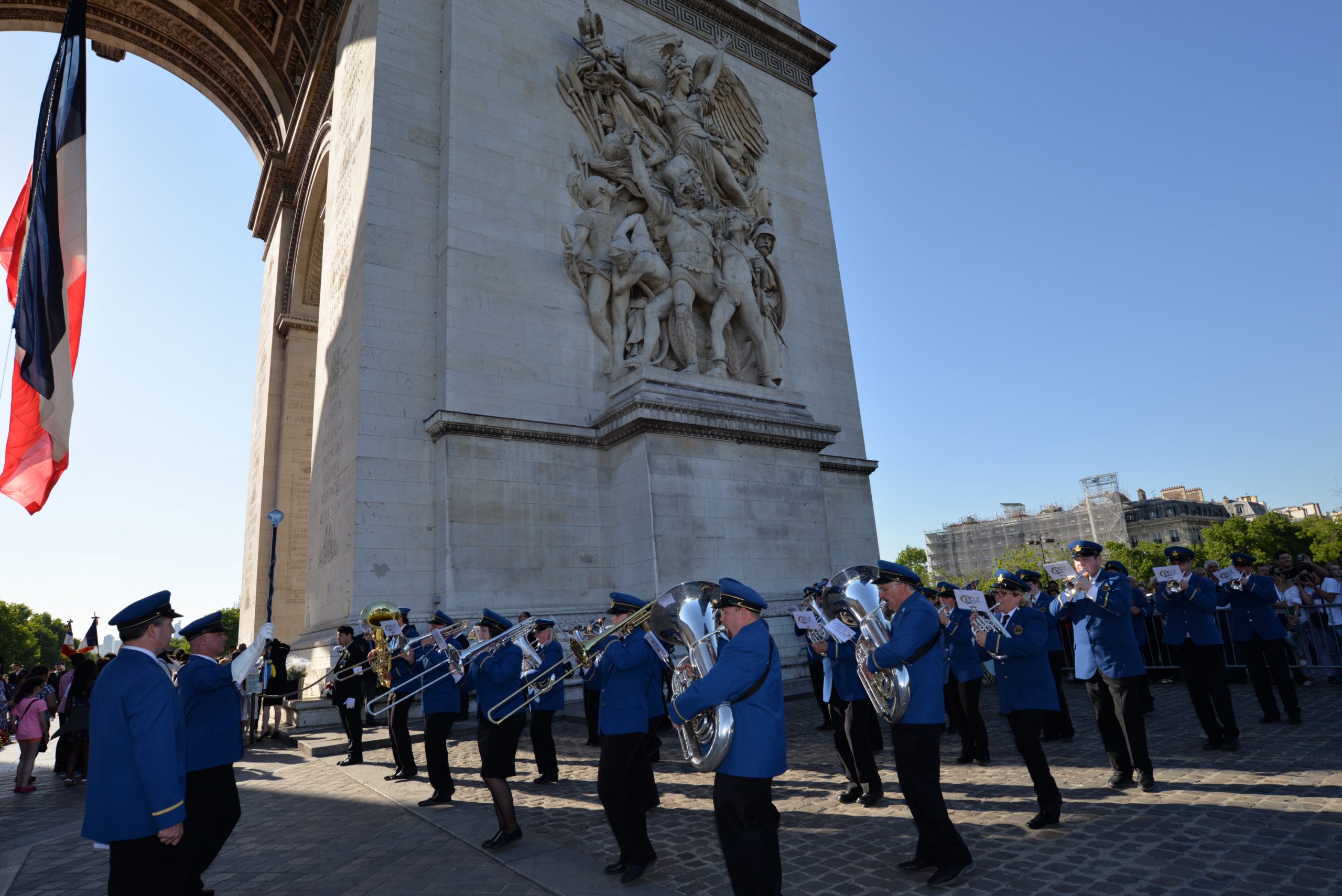 AS Gippsland troops departed the Traralgon Railway Station, bound for the Great War, the town’s band played for them.

It was in this spirit of honour and respect, the modern-day band decided to embark on a mammoth fundraising project that would allow it to tour France, performing services of remembrance at Western Front memorial sites.

The goal was to lay a poppy at the headstone or memorial wall of 150 fallen Gippslanders, whose families had contacted the band.

Upon its arrival home earlier this month, the band had placed almost all of the poppies at their intended place, with the remainder to be laid by members of the French community, with whom the band has built lasting ties.

The tour was an unprecedented gesture by a community band, acknowledged by the French with requests of great honour, most notably to lead a parade down Avenue des Champs- lys es to the Arc de Triomphe for a service at the Tomb of the Unknown Soldier.

It was only the fourth time a band outside France had led the parade.

Fourteen year-old Brandon Salter, whose father Leon is a member of the band, held a corner of the French flag during the procession.

“We set out to do a task on behalf of the community of Gippsland and we were overwhelmed by the response we received,” band member Daryl Hill said.

“We are immensely proud of what we achieved.”

Among the sites visited were the Menin Gate Memorial at Ypres in Belgium, the VC Corner Australian Cemetery and Memorial at Fromelles in France, along with Pheasant Wood Cemetery, Bullecourt Cemetery, Pozieres and Villers-Bretonneux.

Each time, the band played the Waltzing Matilda March, a hymn and the Last Post.

Band president Phil Medhurst played the Last Post at the headstone of his great uncle, Private Thomas Cosgriff, who was killed at the battle of Fromelles on 19 July 1916.

“He was only found in 2009. There were five mass grave sites found at Pheasant Wood, he was in one of them,” Mr Medhurst said.

“They identified him through DNA forensic analysis.”

Mr Medhurst said it was an honour to play the Last Post at his great uncle’s grave.

“Wherever we went, the emotion just washed over everybody.

“It’s incomprehensible the number of cemeteries and graves and trying to imagine what is beautiful farmland was once a place of horror.

“When you’re there, a sense of reality cements what you know of the war, what Australia did for another country; it’s incredible what they did, what they sacrificed.”

“The French could not put enough praise or honour on that band,” Cr Harriman said.

“To even contemplate what they did was enough, but to get there and to play for our soldiers who didn’t come home from Gippsland and lay a poppy, it’s really moving.

“I think the band probably don’t realise what they’ve done and what it meant.”

The band also performed under the Eiffel Tower and did a full concert at the Notre Dame Cathedral.

“As we were leaving one of the customs guys said ‘you’re the band’ and started calling people over,” he said.

“They did Latrobe City proud, the did all of Gippsland proud. To be part of it was indescribable”.

It was not just in the gesture of remembrance that the band did the region proud, it was in the competition stakes as well during the United Kingdom leg of the two-week tour.

The band entered the Whit Friday Brass Band Competition in the Saddleworth district of Yorkshire, competing against 120 bands from across the UK and Europe.

It received the honour for best band outside the UK and for presentation.

It was the first time an Australian band has taken part in the competition.

The band also performed at the Tower of London and Hyde Park.

It took more than a year for the band to raise enough money for the 27 playing members to attend, totalling more than $300,000.

This was achieved with the support of local businesses, individuals and a $25,000 contribution from Latrobe City Council.

“A little girl came up to us when doing the (Anzac Day) service in Traralgon, gave us $5 out of her money box; that touched our hearts,” Mr Hill said.

The band’s family members and support crew paid their own way.

Cr Harriman’s trip was paid for by council.