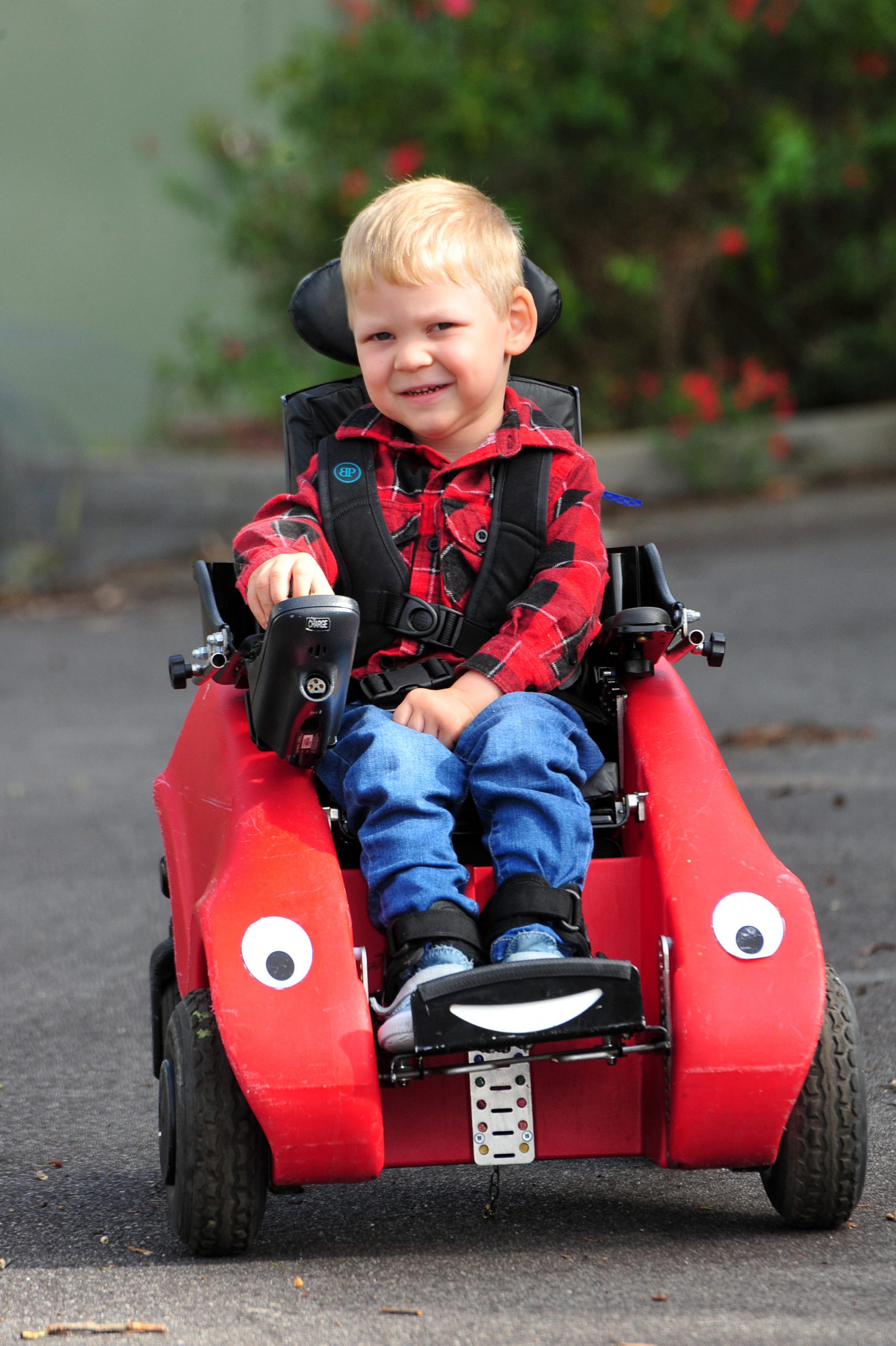 WITHIN five minutes of saying ‘hello’ to three year-old Jack Radford, the Hernes Oak boy has you throw and catch any toy he can get his hands on.

It is a different sight from the boy whose mother, just last year, was calling on the community to help fund equipment that would allow him to move around with children his age.

Jack was born prematurely at 35 weeks and has cerebral palsy, a permanent condition that impacts posture and movement.

Since receiving a three-in-one mobility scooter and an adjustable support seat towards the middle of last year, Jack has improved in leaps and bounds.

But it is the arrival of the Wizzybug – a powered wheelchair for children under five years – that has helped the energetic youngster continue thriving on newly-found independence.

“His confidence, his cognitive ability (have improved); he’s able to express (himself) and he’s quite a superstar at childcare – the kids love it,” mother Natalie Radford said.

“He gets down and plays without having to worry about getting wet in the winter and crawling all over things.”

Jack now calls the Wizzybug his own after featuring in a Christmas fundraiser run by disability support organisation Yooralla.

He trialled the chair for four weeks earlier this year as Yooralla staff worked towards funding a fleet, with the mobility devices priced between $11,000 and $12,000 each.

Ms Radford described the prospect of handing the Wizzybug back as “heartbreaking”; Jack had taken to the device almost instantly.

“We were getting towards the end (of his trial) and we were thinking… ‘how can we put him back on the floor and make him slither around commando style?’,” Ms Radford said.

“But then we got the call that said, look we can keep it. And it was just the best news ever. I was hysterically happy.”

This year the family was able to hold its first Easter egg hunt Jack could truly participate in – a vast difference from last year when they “laid a tarp out, put Easter eggs on it and he slithered around on that”.

Instead, the family “put eggs up at his height” for him to find, reach and grab – proof, Ms Radford said, powered wheelchairs didn’t impede on a child’s development.

“There is a bit of a stigma, I think, attached to kiddies in power chairs,” she said.

“They say it doesn’t teach them to walk or anything like that, but I think that’s nonsense, because it’s given Jack so much strength and so much independence to be able to do things when he’s out of the chair.” Jack’s Wizzybug will return to Yooralla for another child to use once he grows out of the infant-designed device and starts using a larger, powered chair for school.

For now Jack is thrilled at chasing his sister around on her bike and helping with the chores – the Wizzybug having given him a sense of inclusion.

“I don’t see Jack as having a disability; to me, he’s just a normal three year-old,” Ms Radford said.

“He’s just a kid, but it’s just that he has a set of wheels to get around on. And to him, that’s pretty cool.”

The Radford family is now looking at purchasing a wheelchair-accessible car, with the modifications estimated to cost up to $40,000.

The family is considering fundraising events, such as trivia nights or high teas, to help pay for the modifications.

Head to the family’s crowd funding page at www.gofundme.com/jacksindependence to help the Radfords fundraise or phone Natalie on 0407 642 989 to help organise the events.

The organisation has received funding over three years for 20 Wizzybugs, and expects to have 14 by the end of the year.

For families, therapists or potential sponsors who would like to know more about the Wizzybug or how to trial the device, phone Adele Petrie at Yooralla on 9362 6111.