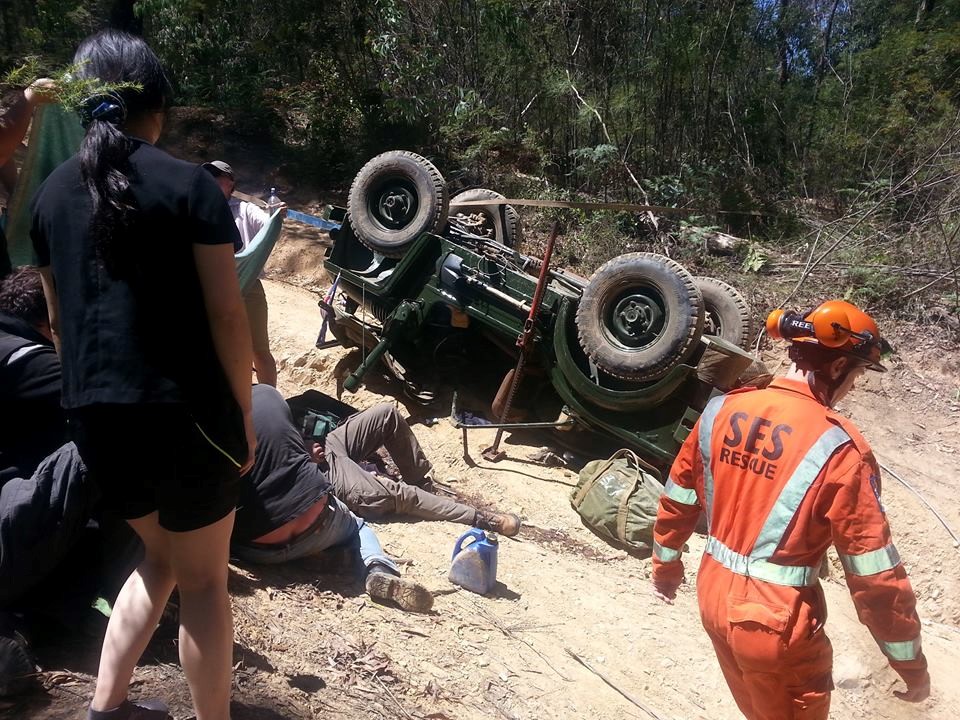 A man is in a stable condition at Royal Melbourne Hospital after being pinned by his vintage four wheel drive on an off-road track near Walhalla on Tuesday.

Police said the 66 year-old suffered neck, spinal and elbow injuries when his Austin Champ soft-top vehicle rolled on a steep incline as he was travelling along Coopers Creek track toward Brunton Bridge.

Fortuitously a 4WD tourism company arrived on the scene minutes later and was able to winch the vehicle and help release the man, who was trapped for about an hour.

Emergency services had difficulty accessing the site and a lack of mobile coverage in the area affected the response.

The incident occurred about 11.45am but Rawson police officer-in-charge Kevin Mclaren did not receive the call until about 12.20pm, and arrived on the scene about 12.50pm.

An air ambulance was called but had to land about five kilometres away after dropping a paramedic in.

The man had to be driven via 4WD to the air ambulance before being transported to RMH.

Senior Constable Mclaren said the man’s vehicle was not well suited to the terrain, with no roll cage affixed, which exacerbated the accident.

“He lost traction, put on the brakes, brakes didn’t hold him and he’s rolled backwards, then the four-wheel drive rolled on top of him,” Snr Const Mclaren said.

“It probably would have paid to have a rollover cage in that, especially an older type vehicle, and the track probably wasn’t suited for his type of four wheel drive.”

He said communication was the “biggest problem” in the mountainous area, and that he had to repeatedly climb a nearby hill to get a signal at the site.

Walhalla and Mountain Rivers Tourism president Michael Leaney said it was important tourists took extra precautions when visiting remote and mountainous areas due to the lack of network coverage.

“Where this incident occurred, as the crow flies, was only four or five kilometres away from the nearest town, so it actually was quite close, but the issue of course is the mountains (which) make access for vehicles and emergency services and of course telephone signals very difficult,” Mr Leaney said.

“People do have to understand that in the mountains communications can be very difficult and do not expect mobile phones to work.

“Go in with the mindset that you’re not going to have communications and understand if something goes wrong there will be a time delay and information on where you are is really important.”

A mobile phone tower is set to be constructed in Walhalla in the next six months to three years under the Federal Government’s Mobile Black Spot Program.

Mr Leaney has advocated for improved mobile phone coverage for about six years but said it would not solve the problem outside the immediate town.

“Mobile phone coverage within the Walhalla township is going to be ticked off and that’s a brilliant thing given the volume of tourists that come into Walhalla, however it’s not going to affect where this accident happened,” he said.

“We would have to put a tower on every hill and even then we wouldn’t get into the gullies.

“These mountains can bite you and do bite people very hard.”