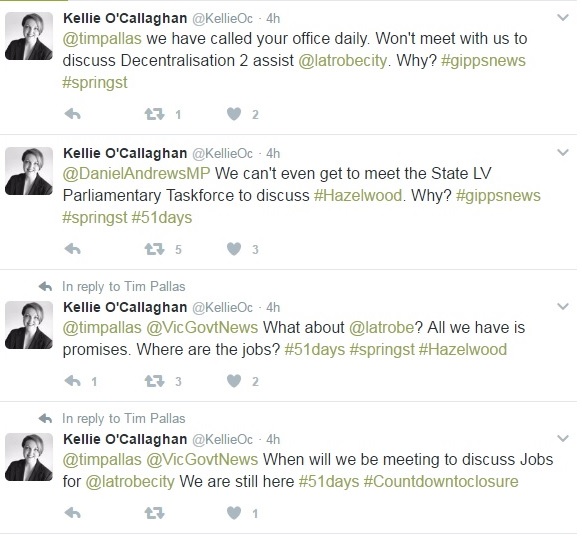 Cr O’Callaghan began criticising the government in response to a tweet from the State Government account, @VicGovtNews, quoting Industry and Employment Minister Wade Noonan following the announcement of a four-year power supply deal to secure the future of Alcoa’s Portland smelter.

In her first tweet, Cr O’Callaghan said Hazelwood workers “needed the same level of intervention” and asked “will their jobs in a new or related industry be secured?”.

When there was no response she tweeted again, saying the Latrobe Valley had not seen that level of commitment from either the state or federal governments.

Next in the firing line was State Treasurer Tim Pallas, who she accused of dodging a meeting with council.

One tweet directed at Mr Pallas said “we have called your office daily. Won’t meet with us to discuss Decentralisation 2 assist @latrobecity. Why?”

A spokesperson for Mr Pallas said the Government was working hard to support local jobs and investment in the Latrobe Valley.