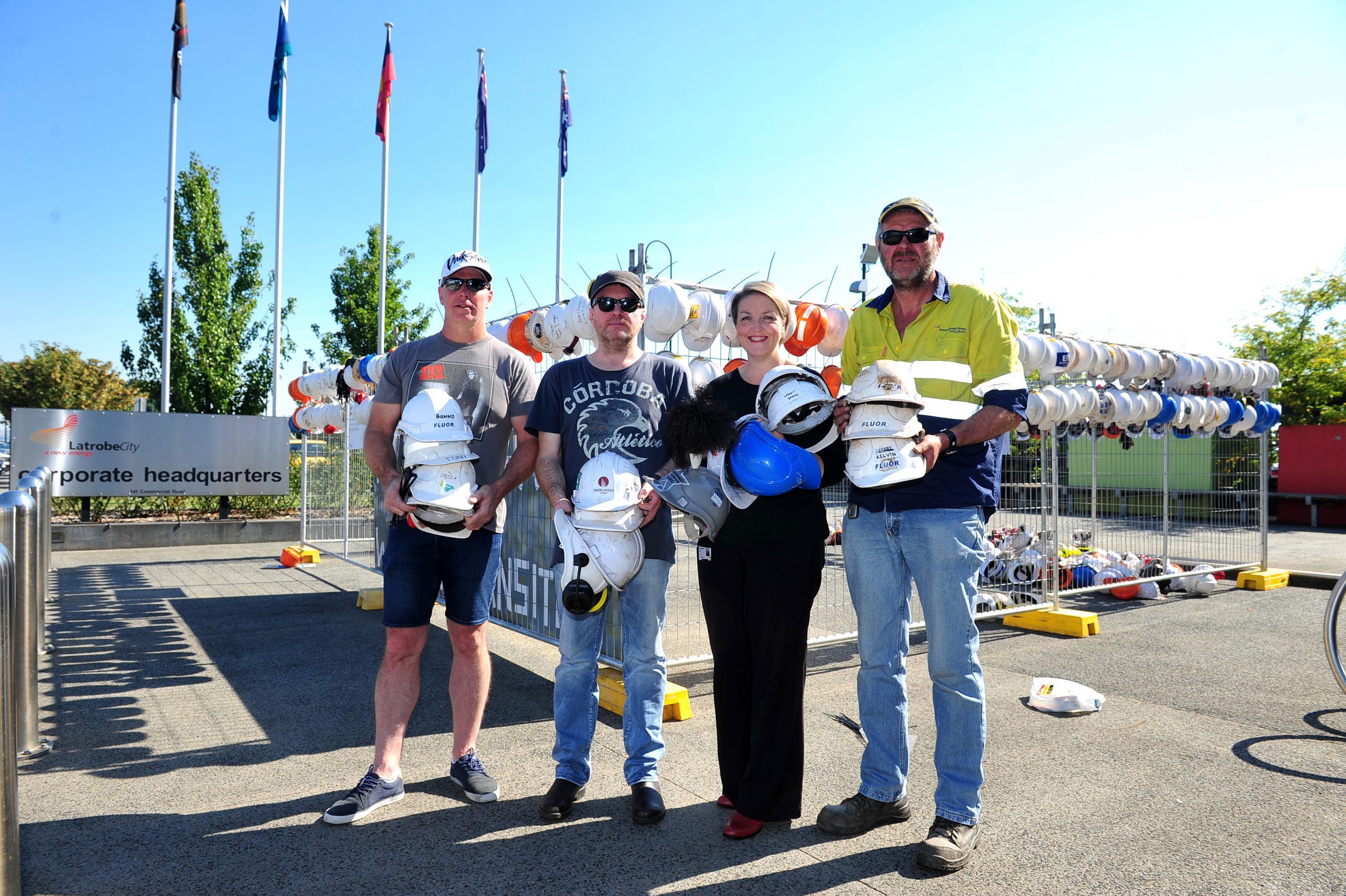 As Hazelwood workers finished their final shifts last week they hung their helmets outside the gates as a tribute to the work they had done powering the state for 52 years.

But by Monday the helmets had come down after plant owner ENGIE removed them citing health and safety concerns.

Yesterday, the helmets moved to a new home outside Latrobe City’s offices on Commercial Road, Morwell.

There they will remain attached to a temporary fence until the end of the month.

Wayne Field, a Hazelwood worker of 32 years, was among those hanging helmets at their new home outside council.

Mr Field said he was thankful to Latrobe City mayor Kellie O’Callaghan and council for agreeing to host the tribute but was angry with ENGIE for taking down them down so soon after the plant’s closure.

“It was unnecessary to take them down, it’s nothing short of defacing a tombstone,” Mr Field said.

“They should have discussed it with us.

“We’ve been beyond professional with this whole process of shutting down of the power station.”

In addition to the helmets, a sign bearing the words ‘hanging our hats on a worker transition’ which was on display outside the station on Friday will also be on display at council.

Mr Field said for Hazelwood workers it was important that the transition goes ahead, including the worker transfer scheme.

“Removing that (Hazelwood) is a massive hit to the Valley and I think we’re still yet to realise it,” he said.

“The only thing that goes some way to fixing that is to get this transition up.”

Cr O’Callaghan said council wanted to provide a space where people could see the helmets and the messages which were written on them.

“There was a significant level of community response to the hats being removed by ENGIE,” Cr O’Callaghan said.

“We wanted just to make sure as soon as possible we could reinstate the display of the hats but also do that in a way that actively involved the workers.”

She said the helmets were part of “a significant narrative” and part of workers’ story was “the messages they’ve left as they’ve concluded their final shifts out at Hazelwood”.

In a statement an ENGIE in Australia spokesperson said the helmets were removed after an incident at the weekend which occurred when “a member of the public was injured while looking at the hats”.

“Following a risk assessment of safety issues relating to the hard hat tribute, management of ENGIE Hazelwood made the reluctant decision to remove the display,” the spokesperson said.

“With risks associated with accessing and exiting site, and a reported safety incident at the weekend when a member of the public was injured while looking at the hats, the difficult decision was made to remove the tribute to ensure there was no further risk or breach of site health and safety procedures.”

The spokesperson said the helmets were collected and handed over to local unions.

“Management hopes the unions will use the hard hats in a permanent display,” the spokesperson said.