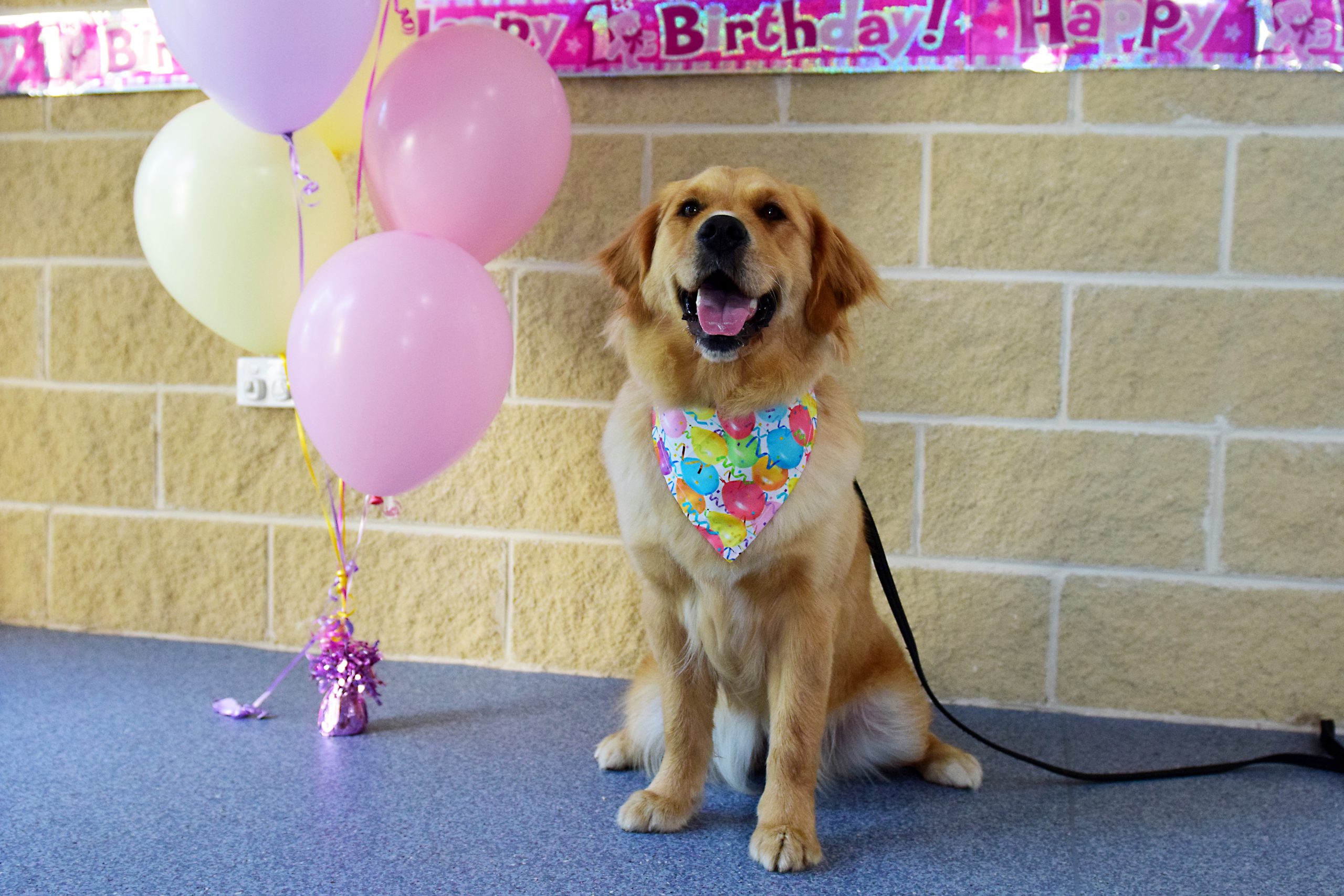 The much-loved people’s pup, Honeybell Lollipop the golden retriever, will celebrate her first birthday with all the festivity and merriment befitting a true queen.

The cuddly pooch, who will toast the momentous occasion with members of the Morwell Neighbourhood House on December 31, boasts an impressive resume.

And, with every great story of a rise to power comes an equally gripping tale of hardship.

Honeybell’s hurdle came when she was just five-and-a-half months old in the form of a badly broken hind leg.

The mishap left Morwell Neighbourhood House manager Tracie Lund “distraught”, and Honeybell was crated for about three months – torturous for a pup usually full of beans.

Now three months on and fully healed, the “traumatic” incident proved to be the making of Honeybell, who has been promoted to the role of Director of Community Wellbeing and Happiness at the Neighbourhood House.

“It’s one of those example where I’d say it takes a village. People in the community bought us gifts for Honeybell, they supported us through the Go Fund Me page, people just popped in to give her some love, people made cards an my family took night shifts because she wasn’t able to go to the toilet, so we were out there in the middle of the rain taking her out,” Ms Lund said.

“Look, she’s a feisty little girl and she’s just got such a big personality and at the end of the day she’s just really responds to people in all situations.

“She was able to pull through it and make a full recovery and now she’s back on the road to her therapy journey.”

Now back on track and full of gusto, Honeybell is already making waves and has won over some of the most timid and reluctant members of the community.

“There’s one case where a little girl is quite frightened of animals and of dogs is now, her mother has messaged me to say because of her engagement with Honeybell, and another dog in town, they’re now picking up a golden retriever in January for their family dog,” Ms Lund said.

The Neighbourhood House deals with clientele who are often isolated or disadvantaged and Honeybell acts as a soothing conduit for people experiencing acute trauma.

“We know that pet therapy is a really great way for people to connect, and it reduces anxiety and stress. Many people who come in here are experiencing trauma and as soon as we bring Honeybell in the levels, the stress sort of fades away and people are able to connect,” Ms Lund said.

“I don’t know how many times I’ve sat in my office with people that are experiencing quite a lot of trauma and they’re quite distressed, and Honeybell’s been there and they’ve actually spoken to Honeybell about what’s been going on.

“Having her as a connection point to the community, the difference that has made to our work has just been incredible.”

Honeybell has camped out at Homestead Boarding and Training in Wonga Park for workshops and is coming along in leaps and bounds, but will require another year of intensive training.

“To finish her training, it is quite expensive, so we are looking for some new community or business stakeholder sponsors for her,” Ms Lund said.

“Next year she’ll be doing far more of that so we think it’s a small investment for such a huge impact.”

Honeybell will be shadowed next year and her impact on the community will be assessed and compiled into a report card for the Neighbourhood House.

“The fact that she’s the first to be training in a Neighbourhood House to specially do this role, we’re very much frontline community, so to have her sitting beside us while we’re doing that is already having an impact on the quality of support we’re able to provide,” Ms Lund said.