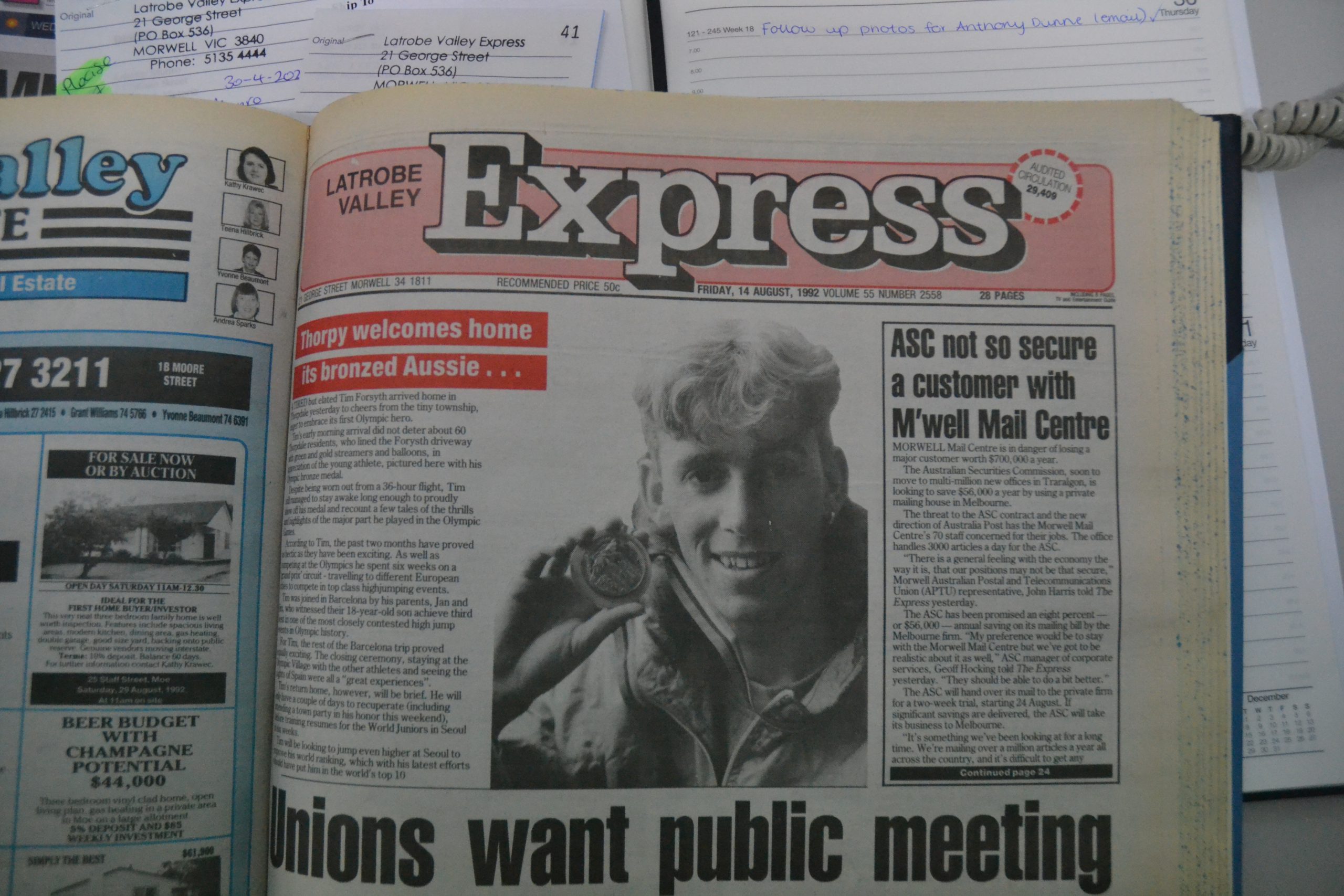 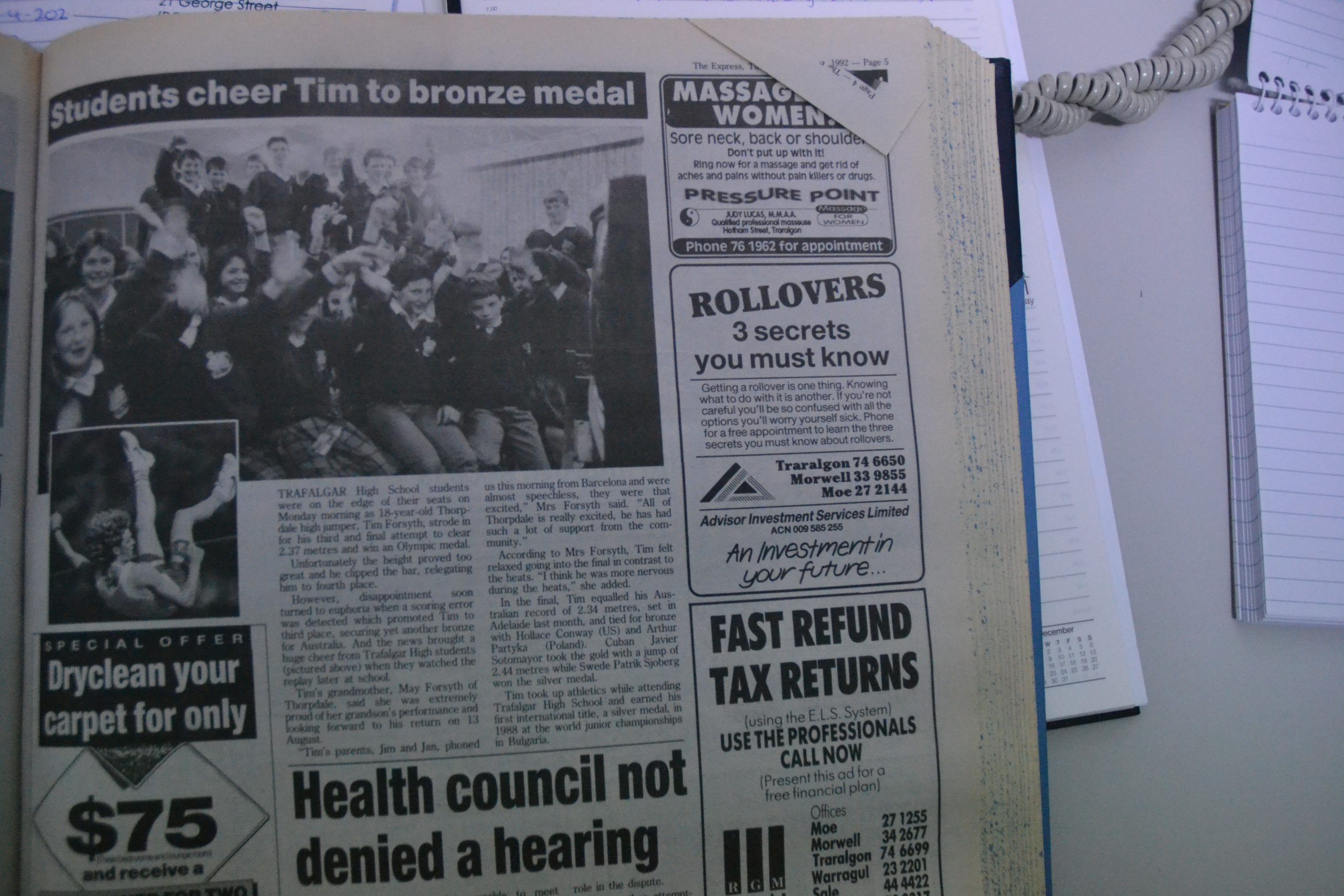 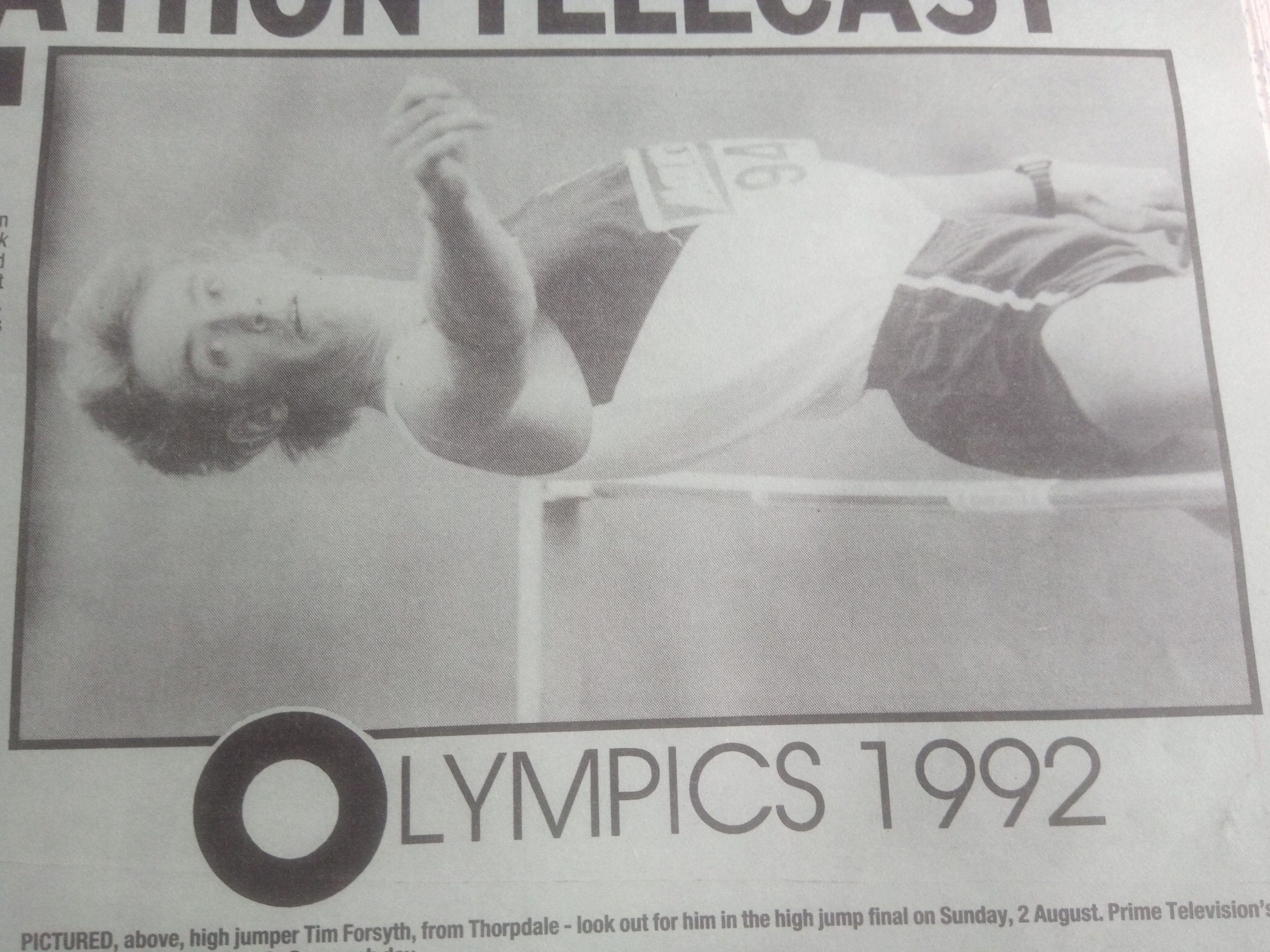 Spain was the scene of the Summer Olympics for the first time when Barcelona played host in 1992.

From the moment a flaming arrow ignited the Olympic cauldron, there was the feeling that these Olympics would be special.

It marked the return of South Africa from the wilderness, but also the dissolving of the Soviet Union and Yugoslavia.

Countries such as Croatia and Slovenia made their Olympic debuts, while athletes from Estonia, Latvia and Lithuania competed under their own country’s flag for the first time since 1936.

The 1992 Olympics were notable due to the presence of the ‘Dream Team’ from the United States, a collection of stars that the Milky Way would have envied.

It would also be a memorable one for the Latrobe Valley as a Thorpdale teenager made a giant impact on the grandest stage of them all.

Tim Forsyth was 15 days short of his 19th birthday when the high jump final took place at the Olympic Stadium on August 2, 1992.

Despite his youth, Forsyth, who stood 1.99cm had rich international experience.

He took up athletics while a student at Trafalgar High School and quickly rose through the ranks, winning silver at the World Junior Championships in Bulgaria.

By 1992, Forsyth was fully-fledged on the senior stage and brought good form into the event, with a pair of important victories in Europe.

The Latrobe Valley had caught Olympic fever as The Express tapped into on Tuesday, July 28, 1992.

Patriotism is alive and well in Giles Arcade, Trafalgar, which has been decked out in green and gold in honour of the Olympic Games and Thorpdale’s favourite son Tim Forsyth.

The inclusion of the talented high jumper in this year’s Australian squad spurred shopkeepers on to fill the mall with green and gold balloons and wattle, Olympic pictures and the Aussie flag.

Taking pride of place in the middle of the display is a high jump on which Tim’s world and Australian records have been marked.

In the lead-up to the games, Tim cleared 2.34 metres to win gold in Oslo and London and set a new Australian record.

According to hairdresser Jodie Brown, the lanky 18-year-old and his family are all well-known to locals who will be watching him in the high jump final on Sunday, August 2.

The high jump final was on day 10 of the Olympics and Australia had already enjoyed major success.

August 2 would be memorable as the day the Oarsome Foursome announced themselves to the world and the day where the Valley could claim our own Bronzed Aussie.

Trafalgar High School students were on the edge of their seats on Monday morning as 18-year-old Thorpdale high jumper Tim Forsyth, strode in for his third and final attempt to clear 2.37 m and win an Olympic medal.

Unfortunately the height proved too great and he clipped the bear, relegating him to fourth place.

However, disappointment soon turned to euphoria when a scoring error was detected, which promoted Tim to third place, securing yet another bronze for Australia.

And the news brought a huge cheer from Trafalgar High students when they watched the replay later at school.

Tim’s grandmother, May Forsyth of Thorpdale, said she was extremely proud of her grandson’s performance and looking forward to his return on August 13.

“Tim’s parents, Jim and Jan, phoned us this morning from Barcelona and were almost speechless, they were that excited,” Mrs Forsyth said.

“All of Thorpdale is really excited, he has had such a lot of support from the community.

According to Mrs Forsyth, Tim felt relaxed going into the final in contrast to the heats.

“I think he was more nervous during the heats,” she added.

In the final, Tim equalled his Australian record of 2.34 metres, set in Adelaide last month, and tied for bronze with Hollace Conway (US) and Arthur Partyka (Poland).

Cuban Javier Sotomayor took the gold with a jump of 2.44 metres, while Swede Patrik Sjoberg won the silver medal.

Forsyth had become the first Australian to win an Olympic medal in high jump for 36 years since Chilla Porter won silver at the 1956 Games in Melbourne.

John Winter, who won gold at the 1948 London Olympics, was the only other Australian to medal.

It speaks volumes of the significance of Forsyth’s feat in Barcelona that no Australian since has medalled in high jump.

His return to Thorpdale after the Olympics was covered by The Express in a front page story on Friday, August 14, 1992.

A tired, but elated Tim Forsyth arrived home in Thorpdale yesterday to cheers from the tiny township, eager to embrace its first Olympic hero.

Tim’s early morning arrival did not deter about 60 Thorpdale residents, who lined the Forsyth driveway with green and gold streamers and balloons, in appreciation of the young athlete.

Despite being worn out from a 36-hour long flight, Tim still managed to stay awake long enough to proudly show off his medal and recount a few tales of the thrills and highlights of the major part he played in the Olympic Games.

According to Tim, the past two months have proved as hectic as they have been exciting.

As well as competing at the Olympics, he spent six weeks on a ‘grand prix’ circuit – travelling to different European cities to compete in top class high jumping events.

Tim was joined in Barcelona by his parents, Jan and Jim, who witnessed their 18-year-old son achieve third best in one of the most closely contested high jump events in Olympic history.

For Tim, the rest of the Barcelona trip proved equally exciting.

The closing ceremony, staying at the Olympic Village with all the other athletes and seeing the sights of Spain were all ‘great experiences’.

Tim’s return home, however, will be brief.

He will only have a couple of days to recuperate (including attending a town party in his honour this weekend) before training resumes for the World Juniors in Seoul in six weeks.

Forsyth finished second in South Korea and would go onto enjoy a successful career in the sport.

He competed in his second Olympics at Atlanta in 1996, finishing seventh and landed bronze at the World Championships in Athens the next year.

It is a mark that still remains today although it has been equalled by Brandon Starc.

Forsyth sealed another bronze in the 1998 Commonwealth Games at Kuala Lumpur and qualified for his third Olympics at Sydney 2000.

These days Forsyth lives on the Mornington Peninsula and works in the education sector.