At one point in history the Breheny name was a powerhouse of Victorian brewing, now after almost a century away from the industry the descendants of one of Victoria’s most ‘beer entwined’ families is back, hoping history repeats itself.

The family got their first taste of brewing when John Breheny (b: 1833), an Irish immigrant established the Marine Stockade Brewery in Williamstown in 1864 which by 1867 was known as the Williamstown Brewery.

This led to a keen interest in brewing from the rest of the family and resulted in John teaching his nine nephews the tricks of the trade, inadvertently sparking a family tradition that is still ongoing today.

Over the next 60 odd years the Breheny family made a name for themselves in the Victorian brewing scene, having at least five breweries to their name in Sale, Bendigo, Ballarat, Toowoomba and most notably Abbotsford which is now the home of Carlton & United Breweries (CUB). 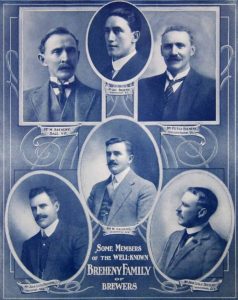 However, in the mid-1930s, due to a volatile and rapidly changing brewing industry in which beer was more easily transported over longer distances, the Breheny Brothers Breweries were bought out and the family name disappeared from beer labels, thus starting an almost 100 year hiatus.

That was until descendants and cousins James and Justin Breheny began a deep dive through their family’s history and discovered the beer recipes that made their family so successful.

“It was probably one out of respect and honour for our family and part of it was to bring it back to life and reclaim it to a degree, because it was such a great story but no one really had a hold of it,” James told The Express.

The pair then approached Burnley Brewing in Richmond who were able to reproduce the beer almost exactly as it was 100 years ago.

“Part of it was that these guys were famous brewers and it would be quite interesting to see what their craft produced,” Justin said.

“The instruction was don’t change anything because we wanted it to be the same beer people drank at that time.”

Since re-releasing in March at a number of locations including the Valley’s own Churchill Hotel, James said the Breheny’s sparkling bitter has been a hit.

“It started as us wanting to bring it back to life but it’s become so much more than that because it’s been so well received and at the pubs that have put the beer on tap it’s actually selling through,” he said.

As well as the taste, Justin said the historical importance of the beer seems to be drawing people in.

“That connectivity to history has been really important in how people view the beer which has been a nice surprise,” he said.

“The stage gate is the beer has to be great and clearly it is but it’s the fact that people see the history and when you’ve got a glass you’re drinking a beer that was made 100 years ago.”

Despite being such a success, the Breheny’s say they aren’t done yet and hope to bring more of the family recipes back to life, including stouts, mid strength and non-intoxicating beer which the family brewed back in the day.

“There’s another three recipes in the book and we’ve got the labels from the time so we’ll go through a similar process and see what it’s like,” James said.

The pair have also set their sights on expanding the availability of the beer by bringing it back to its roots in the hope of making it a staple in pubs across Gippsland.

“I hope people are still drinking the beer in 100 years’ time,” James said.

“We won’t know it but if we create something that continues for another generation or two that would be unbelievable.”