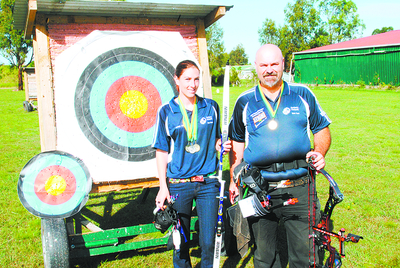 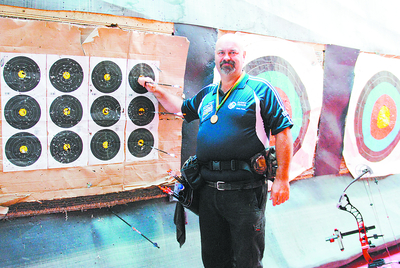 Twin City Gippsland archer Peter Bennett has overcome a case of food poisoning to win the open male clout title at the National Archery Championships, earning him a spot in the Australian team which will compete at the World Championships in France later this year.

“To be honest, I was pretty chuffed when I found out,” Bennett said.

Selection in the team was based on the results from the national championships, as well as scores from competitions throughout the year.

Bennett has worked towards national selection since the world championships two years ago.

“But it was only a few weeks ago when I put my scores in and saw that they compared pretty well, that it went from being a dream to a real chance.”

However, the clout competition is different to what Bennett will be doing in France.

Over there, he will compete in field events, where competitors run up and down hills and shoot at targets in the bush.

“In France the targets will be much closer,” he said.

“On the first day, we will have to judge the distances for ourselves, but on the second they will be marked.

“The distances we’re looking at are around 10 to 60 metres, whereas the clout title I won was 180m.”

Bennett said he was excited about the competition in France, as field events were his favourite discipline.

In Victoria, there are about six field competitions per year, all of which Bennett competed in.

“In the mean time, I’ll be doing as much practice as I can on my own,” Bennett said.

“Everyone in the team has their own training plan, and in a few weeks I’ve got a coach, Leigh Cornish, coming from Melbourne to practice estimating distances.

“He’ll be spending a week with me, which I’m looking forward to because he has shot at this level before and won a bronze, so I’ll learn a lot.”

At the national championships, Bennett competed in a back brace which he hoped he will not need in France.

“I’ll be doing a lot of swimming to get my back right, as well as working on general fitness,” he said.

“We’ll be walking about five to 10 kilometres per day at the championships so it will be tough in that respect.”

The world championships will be held in Val d’Isere, France from 14 to 19 August.

Bennett said there was talk in the international archery community of making field archery an Olympic sport.

“It would be incredible.”