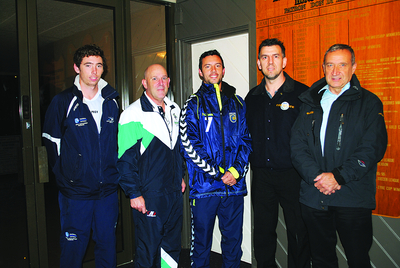 Unfortunately heavy rain prevented the much-anticipated skills session, but Hutchinson was still able to engage the young soccer players with a seminar, with time for questions and answers.

National and international soccer commitments have prevented the central midfielder from spending time in the Valley over the last year, but he believed it was important for successful athletes to “remember where they came from”.

“I think it’s important for people who have succeeded, in any area really, sport or something else, to come back and encourage young people, especially in regional areas,” he said.

Growing up in Morwell, Hutchinson played for Morwell Pegasus and later, the Gippsland Falcons.

Hutchinson remained with Pegasus as he rose through Australia’s soccer ranks, and said it was important to choose a path that worked for the individual.

“There are so many pathways available now, like the academy and other training schools,” he said.

“It’s important that kids realise that there are always options, and that just because your friends are doing things one way, doesn’t mean you have to do it the same.”

In terms of advice, Hutchinson stressed to the students that it was not just the most talented players who made it to the professional leagues.

“It really comes down to hard work and dreaming big,” he said.

“There’s no point in making your goals really small and being satisfied with that.

“Say you want to play for the Socceroos one day and if you don’t make it, it doesn’t matter, at least you’ve had a go.”

With the A-League season ending recently, Hutchinson said he was looking to play the Chinese Super League over the break, with the Mariners sister team the Chendu Blades.

“I played with them last year so hopefully that’ll come off again,” he said.

“Otherwise I’m just up for a five-week break.”