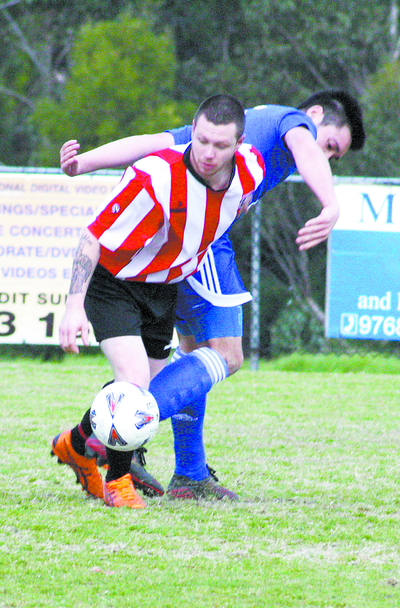 Pegasus went into the match favourites sitting on top of the ladder, but were forced to make two changes to the starting eleven, with Leigh Coffey and Jamie McGeoghegan, away on international duties. Chris Wynne and Hayden Ross-Schultz came in, with recent goal scorers, Daniel Cairns and Jason Rand dropping into defence.

The game was played at a frantic pace, with the young Pegasus team having a couple of good chances early, but Shane Tagliaferro and Dragan Milesevic were unable to trouble the scorer.

The experienced Langwarrin, which kicked off with a strong breeze, was trying to dominate Pegasus. Langwarrin’s Ben Cullen got his head on the end of an in-swinging free kick from point-blank range, only to find David Schonberger well positioned to tip over. Pegasus got on the scoreboard in the 36th minute via the head of Max Etheridge.

Paul Byrne had played the ball to Milesevic at the back post who headed it back across goal.

Chris Wynne got the ball out to Byrne again, who chipped it back in with his left foot for Etheridge to get his third in four games to take the half-time score to 0-1.

For the second half, Langwarrin brought on Billy Armour, who used all his experience, to try and get them back into the game but to no avail.

Rod Meikle for Langwarrin was through on the Pegasus goal about to pull the trigger, when Robert Wynne made a great tackle to deny him.

The game seesawed from end to end into injury time, when Chris Duncan making his first senior appearance for Pegasus, after a long term injury, sealed the three points taking the full-time score to 0-2. It was another great all-round team performance by Pegasus, keeping them top of the table despite second-placed Kingston having a game in hand.

Pegasus meet Kingston in two weeks. Pegasus are at home to the Eastern Lions at 5pm on Saturday at Ronald Reserve, Morwell.