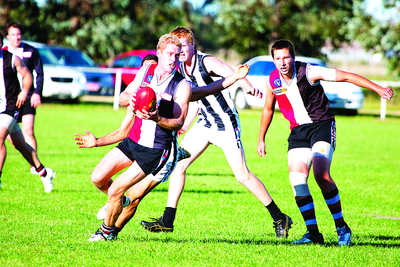 COWWARR is one of several teams confident of claims of a finals berth, but must overcome Traralgon Tyers United in round 11 of North Gippsland football.

The Saints kept their finals pulse beating with a gutsy come from behind victory last Saturday against Churchill.

Cowwarr went into the game with a four/five win/loss record and needed a win to keep in touch with the top five.

The Bombers have demonstrated continued improvement while the Saints have struggled this year to match it with the competition’s front runners.

Although winning two of their last three games, the Saints still appear a shadow of their former selves.

Little separates the two sides on paper, which is evident by the 26-point margin in their round two clash.

The Bombers’ back six continues to stifle opposition sides with relentless defensive pressure.

It will be TTU’s defensive pressure which will have a significant bearing on whether the Saints continue their winning run after this weekend.

The Saints’ forward structure is a solid unit which boasts many avenues to goals.

However, the Saints will come up against the competition’s second ranked defensive unit.

With both sides’ end of season ambitions weighing heavily on this weekend’s result, spectators should expect a tight contest which may be decided by the side whose backline takes control of the match from the opening bounce.

The Dogs have been the most hunted side in 2012 but have shown in the opening part of the season they have lost little of their dominant form.

Brushing aside several opponents with percentage boosting victories, it has been far from one way traffic over the past month for the Dogs.

The Dogs have been made to work hard for the points over the month of June, however the young pups proved they had the resolve to hold on in the dying stages of last Saturday’s match to keep the Magpies at bay in a five-point thriller.

In comparison, this week’s opponent Boisdale/Briagolong comes into the match on the back of a 58-point defeat.

With just the two wins to date, the Bombers would have seen last Saturday as an opportunity to improve their season ledger and would be reeling from a lost opportunity.

The Bombers will be under no illusion as to the enormity of the challenge the Dogs pose and can ill afford to allow Sale City to blow out to a commanding lead in the opening term.

Rosedale notched up its sixth straight victory at the weekend and has proved it is a premiership contender.

The Blues now face a challenging month on the fixture with games against Churchill on Saturday, Traralgon Tyers United, Glengarry and Sale City.

Churchill conceded a two-goal final term lead on Saturday and the loss has resulted in a log jam in the middle part of the premiership ladder.

Leading at each change of ends the Cougars were unable to match the opposition’s intensity in a hard physical contest.

Placed 21 percentage points outside the five, the match is a must win for Churchill which can ill afford to fall further from the main pack.

Woodside has yet to record its opening win of the season and faces Glengarry on Saturday.

The two sides have contested a number of classic contests in past seasons, and while the Wildcats have yet to post a win, they have shown plenty of promise and are fully aware the four points are not too far away.

However it is going to be a tough assignment for the young Wildcats who will need to be at their best to topple their more fancied and experienced opponents.

With a finals berth on the line, the Magpies will be eager to return to the winners list with a tough month on the fixture nearing.

GORMANDALE surprised many league followers with the ease by which it dominated last week’s contest when it recorded its second win of the season.

Providing coach Paul Richards with the perfect celebrations to mark his 200th club match, the Tigers found spirit and fight which has eluded them in contests this season.

However the going does not get any easier for the ninth-placed Tigers who host a rebounding Heyfield lineup.

Fourth-placed Heyfield could do little to stop the spirited fight of ladder-leader Rosedale last week, which brought the Roos’ five game winning streak to a halt.

In their current form it is hard not to look past the Kangaroos to return to the winners list against the Tigers.