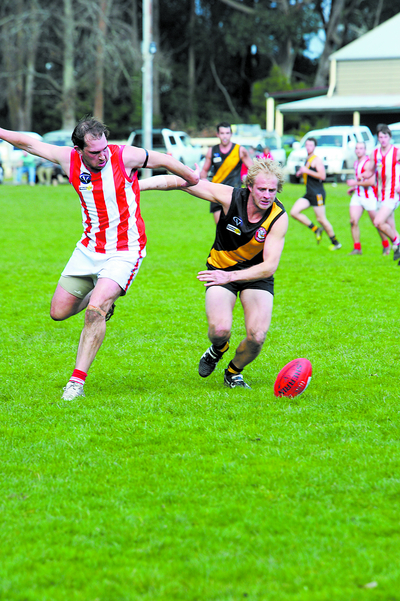 Bloods coach Chris Kyriacou said he challenged his side at three-quarter-time to take the game on and stand up to their challengers.

“The team was just buzzing (on Saturday).”

The lead changed multiple times during the match, with the Tigers taking a 10-point advantage at the first change before the Bloods snuck in front to lead by four points at the major break.

Tigers’ assistant coach Matt Holland said the team’s loss to Trafalgar was a bit of a wake-up call and the players were disappointed, but still upbeat.

He said the players may have gotten complacent after eight consecutive victories and this loss could be constructive in regards to improving fitness.

An inconsistent Yinnar paved the way for Newborough’s 29-point win against the Magpies.

Despite Thys Stanistreet opening Yinnar’s account after the first bounce and dominating the quarter, Newborough led by a goal at quarter-time.

In the second quarter, the Bulldogs stepped up their intensity and increased the pressure on the ground and on the scoreboard to take a 27-point lead at the main change.

Newborough was winning more of the clearances and key players like Chris Hancock, Anthony Alderuccio and Allan Chandler made a difference.

It did not get easier for Yinnar in the third quarter, with the Bulldogs stretching their lead out to 38 points.

Yinnar found some energy to outscore Newborough by three goals to one in the final term, but it was not enough, with Newborough winning 11.14 (80) to 7.9 (51).

All went as expected as Hill End scored a percentage-boosting 87-point victory against Thorpdale.

The Blues were competitive in the first half and trailed by 14 points at quarter-time.

While both teams had an even amount of the ball in the second quarter, the Blues’ inaccurate attempts at goal helped Hill End extend its lead to 32 points at half-time.

The inaccuracy continued in the third quarter, with Thorpdale only managing two behinds and the Hillmen one goal and six points.

A “FANTASTIC” performance from YYN’s onballers helped the Bombers to a crucial seven-point victory over Boolarra.

YYN coach Tony Price said he was happy to hear the final siren as the last few minutes of the match had given his team a “scare”.

The Demons had started well and in an even first quarter Boolarra led by a goal at the first break.

According to Price, the Bombers responded to play one of their “best quarters of football for the season” to take a 23-point lead at half-time.

The Demons kept pace with the Bombers in the third quarter, with YYN holding onto a 21-point lead.

Morwell East recorded a 35-point victory against struggling Yarragon on Saturday, but Panthers coach Shaun Kleeven said his side put in a good performance.

Kleeven said the team was now able to match it with higher positioned sides compared with the first half of the year when they were being overrun.

“We do play patches of footy where we do use the ball really well, but we just still have lapses and that’s where we’re getting hurt,” he said.

The Hawks came out firing, scoring six goals to one in the first quarter.

It looked as though the Panthers would be in for another heavy loss, but the side regrouped and kicked three in the second to trail by 26 points at half-time.

The Hawks maintained their dominance on the scoreboard and took advantage of the Panthers’ lapse in the third quarter to widen the margin to 38 points.

The Panthers matched the Hawks in the last quarter and outscored them two goals to one, but proved two good quarters were not enough to win a game of football, with Morwell East winning 12.7 (79) to 7.2 (44).