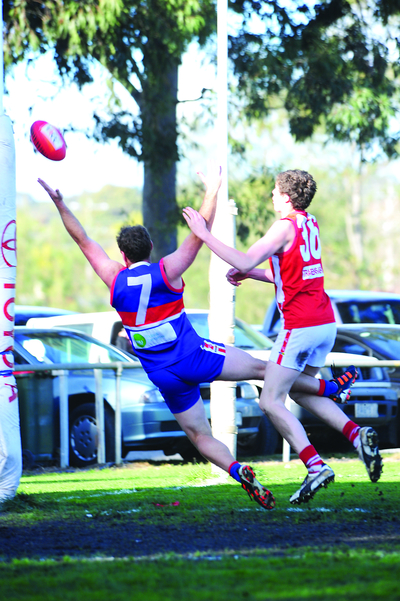 BASIC skill errors in the last quarter were to blame for Trafalgar’s nail-biting draw with Newborough in Mid Gippsland football, according to Bloods coach Chris Kyriacou.

Depite holding a 16-point lead heading into the final quarter, the Bloods took their foot off the pedal to allow the Bulldogs into the game, and ultimately share the spoils 75-all.

“We had them on the ropes and we had the chance,” Kyriacou said.

“But in the last quarter you can’t take the foot off the pedal and that’s what we did.”

He believes with this draw Trafalgar will finish second or third, but said this could be a “good thing”.

“It will stop his boys from getting ahead of themselves in finals,” he said.

“At least the draw keeps our feet firmly on the ground; we know where we are at.

“I think with a young group it might be better off that we don’t finish first at the end of the year.”

The game looked like it was going to be a tight one from the start with only one point in it at quarter-time.

Trafalgar got out to a three-goal lead in the second quarter and maintained it for the third, leading by 16 points going into the last quarter.

But with a large crowd behind Newborough for Matt Disisto’s 300th senior game, the Dogs came out harder in the last quarter.

Mirboo North took a three-point lead into the final quarter, but the Bombers opened the term with a goal to snatch back the lead and kicked another to widen it to 10 points.

But Tigers’ Donny Webb kicked a goal to reduce the margin back to four.

The Bombers managed another two goals and pushed the lead out to 16 points – the biggest margin held by either side all day.

With six minutes to go it seemed the Bombers had secured the points; however, the lead was short lived.

A goal to Mirboo North was followed by another and with less than two minutes to go, the Tigers kicked another goal to hit the lead by two points.

After the centre bounce the Bombers got a free kick in their forward 50, but the kick it went out of bounds with seconds to go.

Mirboo North had possession as the siren sounded and YYN’s finals dreams were all but shattered.

“We knew they were going to really come up against us and we just need to keep working so we could open the game up,” Henry said.

“We play our best footy when we play on, when we get the ball moving.

Henry was confident the win had secured Morwell East a finals berth.

Hill End captain Kris Ayton said the team’s chances of making finals were “slim to none”.

The Demons opened their scoring with four behinds from five shots, allowing Thorpdale to stay in touch at quarter-time.

Both sides played pressure football, with Boolarra leading by three points at half-time.

Despite Thorpdale’s best efforts, getting within a point at one stage, the Demons hung on for the win.

Blues coach Brett Sherriff said it was the first time his side had played well for four quarters and was happy with their performance.

“We kept the pressure up probably most of the day; we just probably didn’t score at times,” Sherriff said.

“I thought we used the ball a bit better than we had done.”

“They were a tough opposition and they probably crowded it up at times, but we managed to work our way through it,” McCulloch said.

“We had some good patches of play, but certainly still plenty of room for improvement.”