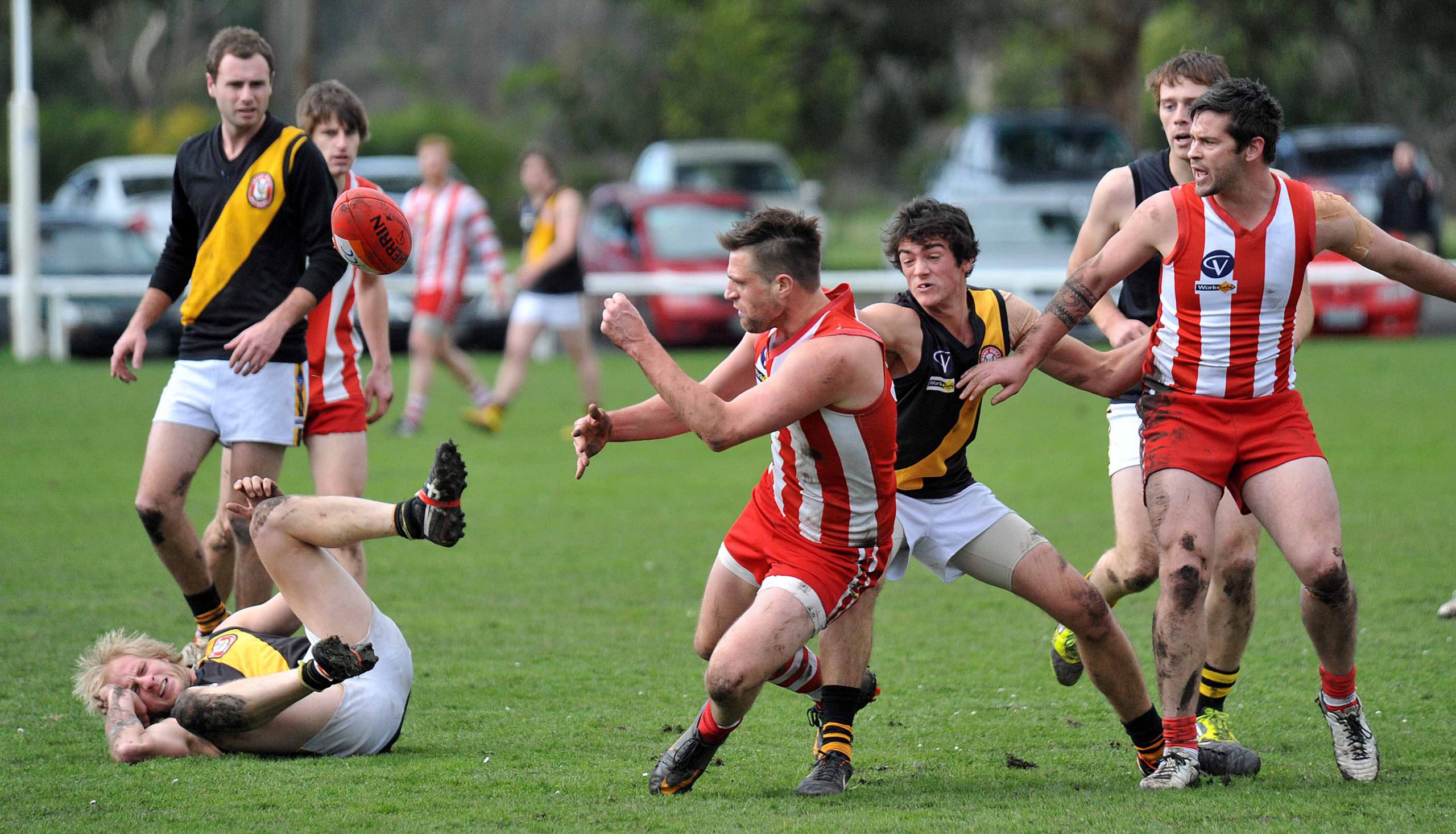 Tigers coach Troy Hamilton said his side “collapsed” after the third quarter fight.

“Just got to be better next week, so hopefully we get back to have another game against Trafalgar.”

He said more numbers at the contest was they key to Trafalgar’s win.

“If you constantly have three on two against you you’re not going to win games,” Hamilton said.

The pressure was on right from the start and it was eight minutes into the first quarter before Mirboo North scored a goal.

Trafalgar got the next centre clearance and quickly replied with its first goal and backed it up with another soon after.

As the Tigers’ pressure dropped the Bloods moved the ball well and into space and managed one more goal and three behinds for the quarter.

Trafalgar’s inaccuracy at goal continued into the second quarter.

The Bloods kicked three behinds before registering its first goal.

Trafalgar had the majority of possession in that quarter and led by 17 points at half-time.

Mirboo North was unable to capitalise on opportunities in the first half of the third quarter and had only one goal to show for its efforts.

A fight broke out, which seemed to fire Trafalgar up, and the Bloods stretched their lead to 22 points at three-quarter-time.

Trafalgar dominated from the start of the last quarter and Klay Butler’s goal put the Bloods in front by 29 points.

The Bloods kicked another goal before the Tigers ended the game with a goal and a point before the siren.

Home-grown Trafalgar player Matt Swenson said the Bloods were “stoked” to take the win and to come away with their double chance intact.

“That (fight) certainly sparked us in the third quarter,” Swenson said.

“We were a bit flat in the first half and after that it sort of set us into motion.”

Hawks coach Paul Henry was happy with his side’s performance despite the loss.

“To Yinnar’s credit they played good footy all day.

“It was going to be a fight to the end and they won it.”

He said there was plenty of positives to take out of the Hawks’ season and he looked forward to starting pre-season later this year.

Yinnar coach Sam McCulloch said he thought his side moved the ball well and got in and under when it was needed.

“We ended up running out the game really well, which is a good sign leading into next week,” McCulloch said.

Both sides opened their accounts with behinds before the Hawks snapped through two goals.

When Yinnar broke through for its first goal the Hawks quickly responded with their third.

The Hawks led by 11 points going into the second quarter.

The Pies bounced back with another goal in the second term and took a one-point lead going into half-time.

In the third quarter Yinnar kept the ball in its forward half and scored two goals to shoot out to a 15-point lead.

The Hawks clawed their way back and kicked two more to be down by three points going into the final term.

The Hawks stormed out with a goal to take back the lead, but the Magpies snatched it back with two goals to lead 55 to 53.

Yinnar stretched the lead out to 10 points, before it kicked two quick goals to seal the victory.

The Hawks scored a late goal, but it was too little too late.