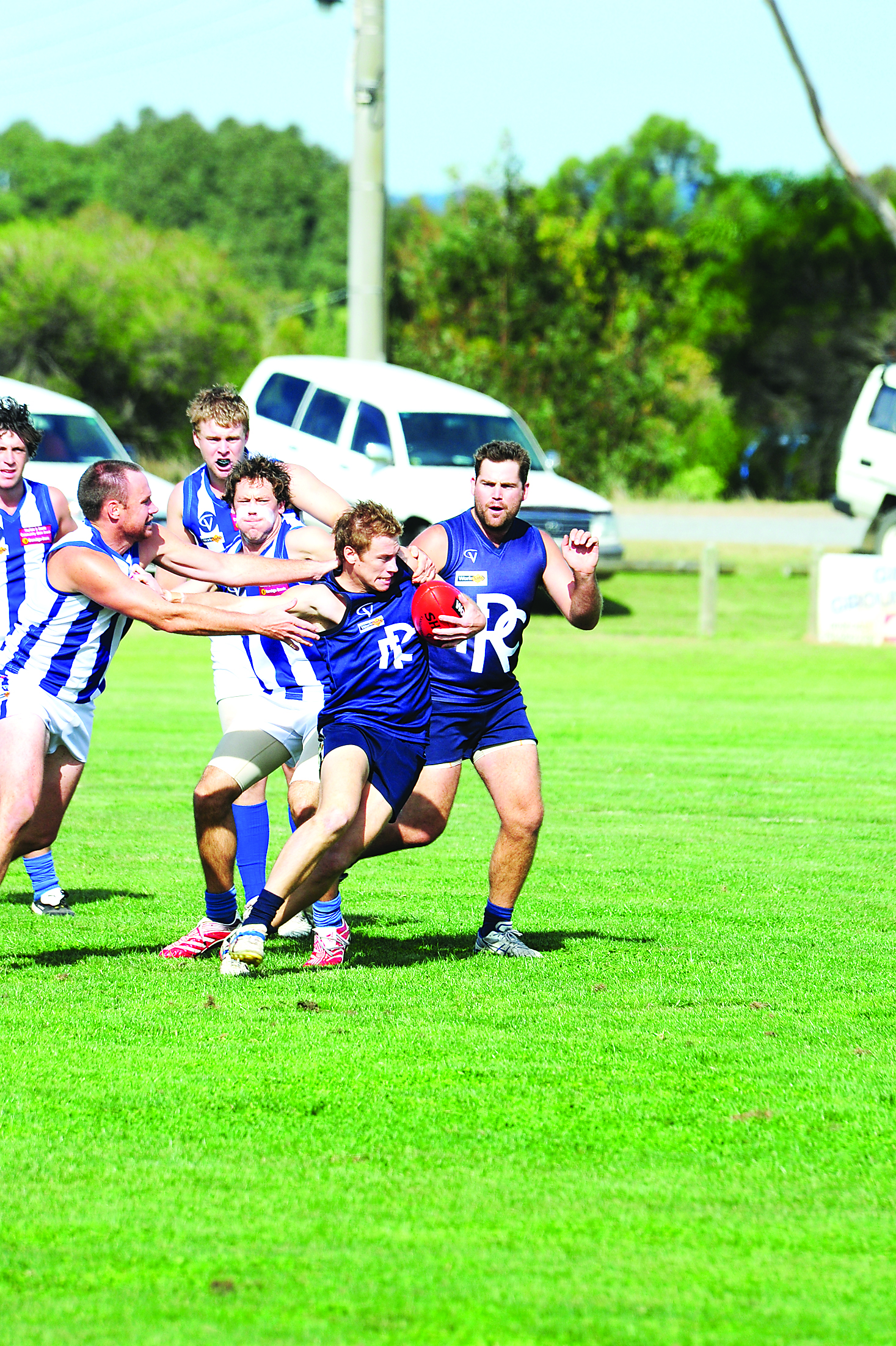 THERE will be mixed emotions come Saturday, when North Gippsland heavyweights Rosedale and Heyfield square off at Glengarry with the winner advancing to the grand final.

Heyfield president John Tyquin said while Birss was a huge part of the Roos’ football club, he admitted come Saturday “he isn’t a Heyfield person; he becomes the enemy until after the contest”.

The Blues have been at the forefront of the competition all season.

Rosedale finished one game clear of its nearest rival Sale City, with Heyfield another game behind on the premiership ladder standings.

Nine weeks have passed since Rosedale and Heyfield last met.

The Blues have had the Roos’ measure in 2012, with a 20-goal victory in the opening round.

While there was plenty of hype and hope surrounding the eagerly awaited second contest, it failed to live up to expectations with the ladder leaders Rosedale on song from the opening bounce.

However, Tyquin was not worried by past results, rather he was confident the young side has further evolved and matured.

“The young guys have grown and matured as the year has gone on; with such a very young group you don’t know what you are going to get each week,” Tyquin said.

“We played Rosedale on both occasions relatively early on in the season, some nine weeks have passed and the side have further developed.”

Speaking on behalf of coach Adrian Cox, the man at the helm of the club was realistic of the enormity of the challenge.

“It’s a big challenge, the current crop of guys are trying to create their own history and to their credit the younger players on the list have carried the club this far and are ready to write their own destiny,” Tyquin said.

Going into the contest full of confidence following Saturday’s victory over two-time reigning premier Sale City, Heyfield will not get too far ahead of itself.

“We won’t be underestimating Rosedale, they are the gun team, they have taken all before them, they have a good coach and are a good team – it’s going to be a great challenge,” he said.

Two-time reigning premier Sale City needs to put a halt to Cowwarr which is on the march having won seven consecutive games including a five-point thriller in the cutthroat elimination final.

The Saints have powered through the second half of the fixture and have accounted for fellow finalists Rosedale, Heyfield and Sale City.

“We were beaten in a fair few areas of the game that we pride ourselves on,” Hider said.

“We couldn’t hold on in the last quarter when they got a run on, the game was on the line and they wanted it more which was disappointing.

“It is going to be tough from here, we have to get over Cowwarr, we can’t look too far ahead.”

Hider said his side must get back to basics on the training track if they plan to counteract the Saints.

“We have to improve in several areas; our attack on the contested footy is one of those areas, when the ball is in dispute we need to get our hands dirty and get in there,” he said.

“It’s really the fundamentals that we need to improve in – back to basics, our run and carry of the ball, we need to use our skills, stick our tackles and get our hands on the footy first.

“Our genuine ball winners are not in form, they haven’t been for weeks.

“As a club we need to stand up when our backs are against the wall.”

The dual premiership coach knows too well the threat Cowwarr poses but takes confidence his side has failed to drop two consecutive matches in the past three years.

“We always rebound strongly but fully recognise that Cowwarr are going to be tough opposition,” he said.

“They play footy how it should be played, hard and fair.

“They have the best back six in the competition which generates plenty of runoff half back.

“Their small forwards are very effective, they have nearly the best on-baller in the league in Luke Cooper and Paul Joyce who have been giving them first bite of the ball in the ruck.”

Hider said Sunday’s game will be a “test of character”.