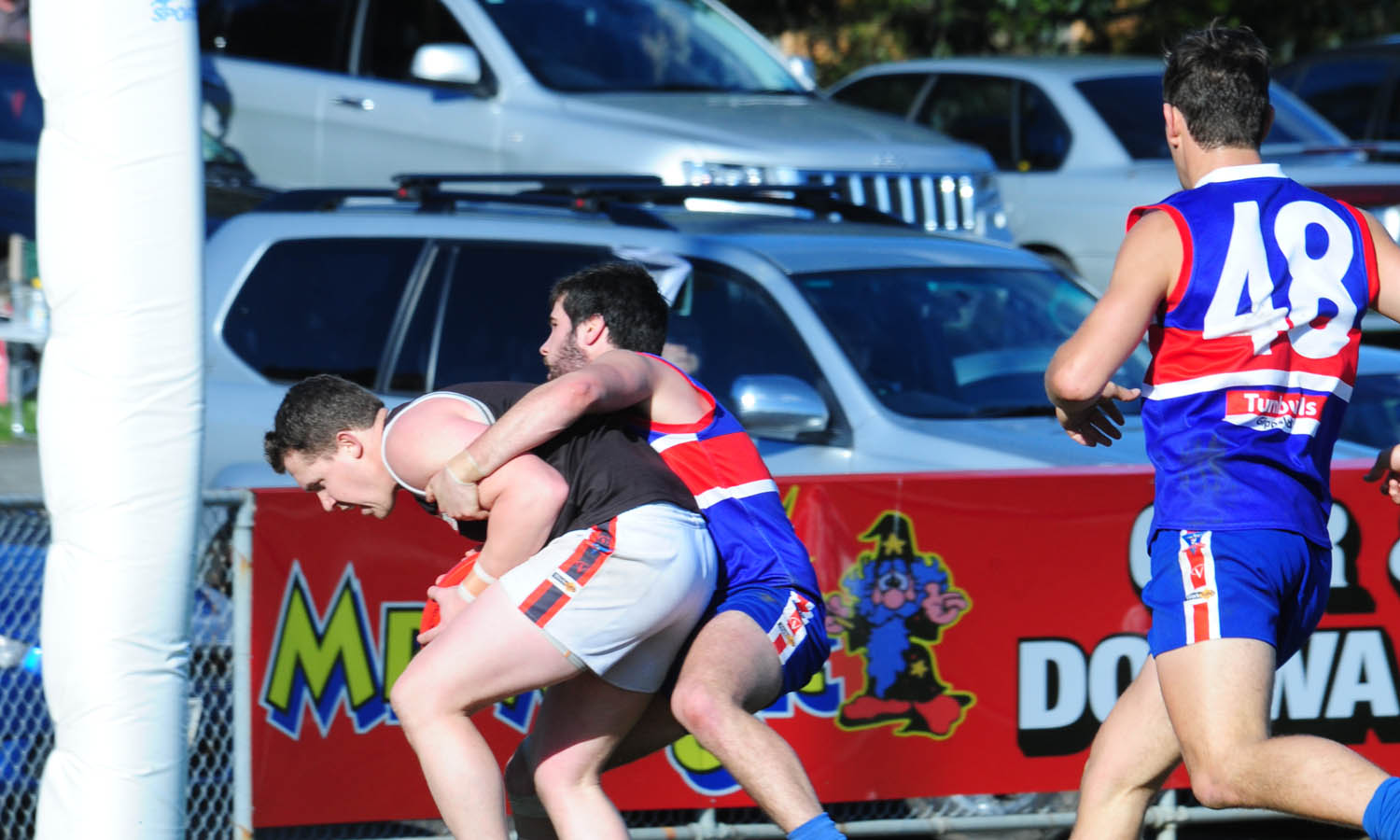 A LATE goal to Sale City’s Damien Ashcroft got the Bulldogs over the line against Cowwarr, 14.14 (98) to 14.13 (97), in their North Gippsland first semi-final yesterday.

In the dying moments of the match, a captain’s goal to Luke Cooper handed the Saints the lead, before City drilled forward with minutes remaining.

Working hard to drive the ball from defence, Cowwarr was caught holding the ball, and Ashcroft quickly played on to snap at goal and secure the Dogs’ a one-point victory, and a re-match with Heyfield in next week’s preliminary final.

Cowwarr started the match strongly with five goals to two, before the Dogs, led by coach Nick Hider and Joel Brayshaw, switched on in the second quarter to kick six goals to three to take a four-point lead going into half-time.

With the game in the balance, the premiership term was a fierce contest with neither side able to break through on the scoreboard.

It took 12 minutes for Cowwarr’s Matthew Cameron to open the scoring.

City’s Trent McMillan responded with his second major as the Saints’ defenders gave away a number of free kicks in their backline.

David Ivey then marked from the centre clearance to goal, before Adam Walker responded to put the two-time reigning premiers back in front.

The lead quickly grew as vice-captain Rowan Bell added another from undisciplined play by the Saints’ defence.

Cowwarr’s Steve Cooper looked to stem the tide with the final goal for the term.

Trailing by three points it was now or never for the Saints.

Cowwarr’s Chris Stasinowsky missed a number of early shots at goal in the final quarter and did not look confident as he looked to pass off before settling on a shot at goal.

His major reeled the margin back to three points, before Ivey handed the Saints back the lead.

A free given away by Cowwarr ruckman Paul Joyce saw Nick Grainger miss, but then Hider goaled to hand his side back the lead.

This was followed by equal theatrics at the other end, when Stasinowsky took a strong mark but failed to finish off as he kicked his fifth behind for the contest, with the Dogs going on to win the thrilling game by one-point.

MINOR premiers Rosedale has secured a grand final berth for the second time in three seasons, after recording a confidence-boosting 71-point win over Heyfield on Saturday.

The Kangaroos managed to stay within reach in a dogged first half at Glengarry, before the Blues piled on 12 goals to four in the second half to win the contest.

Rosedale burst out of the blocks with the first two goals of the day, with Dom Keating running from half-back to score a goal from the 50-metre arc.

It took about 10 minutes for Heyfield to settle and open its scoring.

The Kangaroos dominated possession of the ball but struggled to outsmart their opponents.

Heyfield was rewarded for its persistence when some clever vision from Josh Neille spotted an unmanned Shaun Humphreys in the goal square.

Rosedale’s Jeremy Reid responded from the centre bounce, with the Blues play marker slamming home his first of five goals for the day.

Heyfield’s inaccuracy at goal did little to help its challenge.

Rosedale’s Andrew Flanagan opened his account with the final goal for the term, with Blues’ midfielders Justin Emery, Chris King and Dale Fleming finding plenty of the ball.

Ross McDermott goaled to extend Rosedale’s lead after the break.

Running off half-back, Heyfield’s Jordon McMillan combined with coach Adrian Cox in the middle of the ground to send the Kangaroos forward.

Leeds swooped on the loose ball to goal, before Brett Szabo got in on the action adding another as Heyfield mounted a challenge.

But as they had done throughout the early stages of the contest, Rosedale responded quickly, first through Emery and then Brad Caldwell. The Blues took a 23 point-lead into the main change.

Rosedale continued the charge in the third term to put another seven goals on the board to take an unbeatable nine-goal lead into the final change of ends.