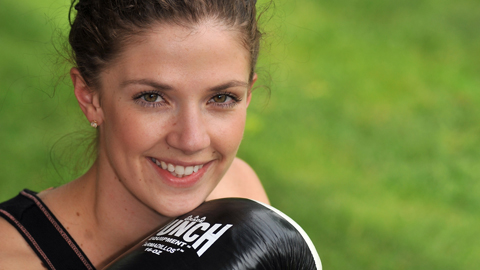 TRARALGON’S Kim-Alina Baldacchino turned more than just her opponent’s head in her victorious amateur boxing debut, impressing promoters who have since offered her a Victorian title bout.

The 25 year-old overcame a significant experience deficit to win the lightweight clash, and will next fight in Brunswick on Sunday, 11 November for a Victorian title.

With four amateur kickboxing fights under her belt, Baldacchino said there were subtle adjustments she needed to make to find her feet in hands-only combat.

“You need to change your stance and the way you move and how to position yourself.

“I had to learn a fair bit more defense and (about) trying to weave.”

At a lean 58kg, Baldacchino has shed 10kg in the past eight months in order to compete in her current weight division, employing a strict diet and exercise regimen.

Training six days a week, often with husband and training partner Steve, Baldacchino is up at 4.40am for cardio and trains again after work, either locally with Ron Conway or at the Hallum Institute of Athletic Performance.

After almost seven years of involvement with kickboxing, Baldacchino made the leap into the boxing arena to seek out increased competition.

“It’s hard to try and find female fighters and there were a few amateur boxing competitions coming up so I thought I’d give that a go and try to get my hands moving a bit better for my kickboxing as well,” she said.

“I still want to carry on with kickboxing but if there is the opportunity to train at the Australian Institute of Sport and maybe the next Commonwealth games; that would be a great achievement if I could do that.

“We’ll just wait and see how it pans out.”

The prolific puncher will review her performance with her training team in preparation for the title fight, something she has been working toward for some time.

“I just love it and I’ve always wanted to try and get a title; the opportunity has come up so I’ll be working hard and hopefully achieve that.”