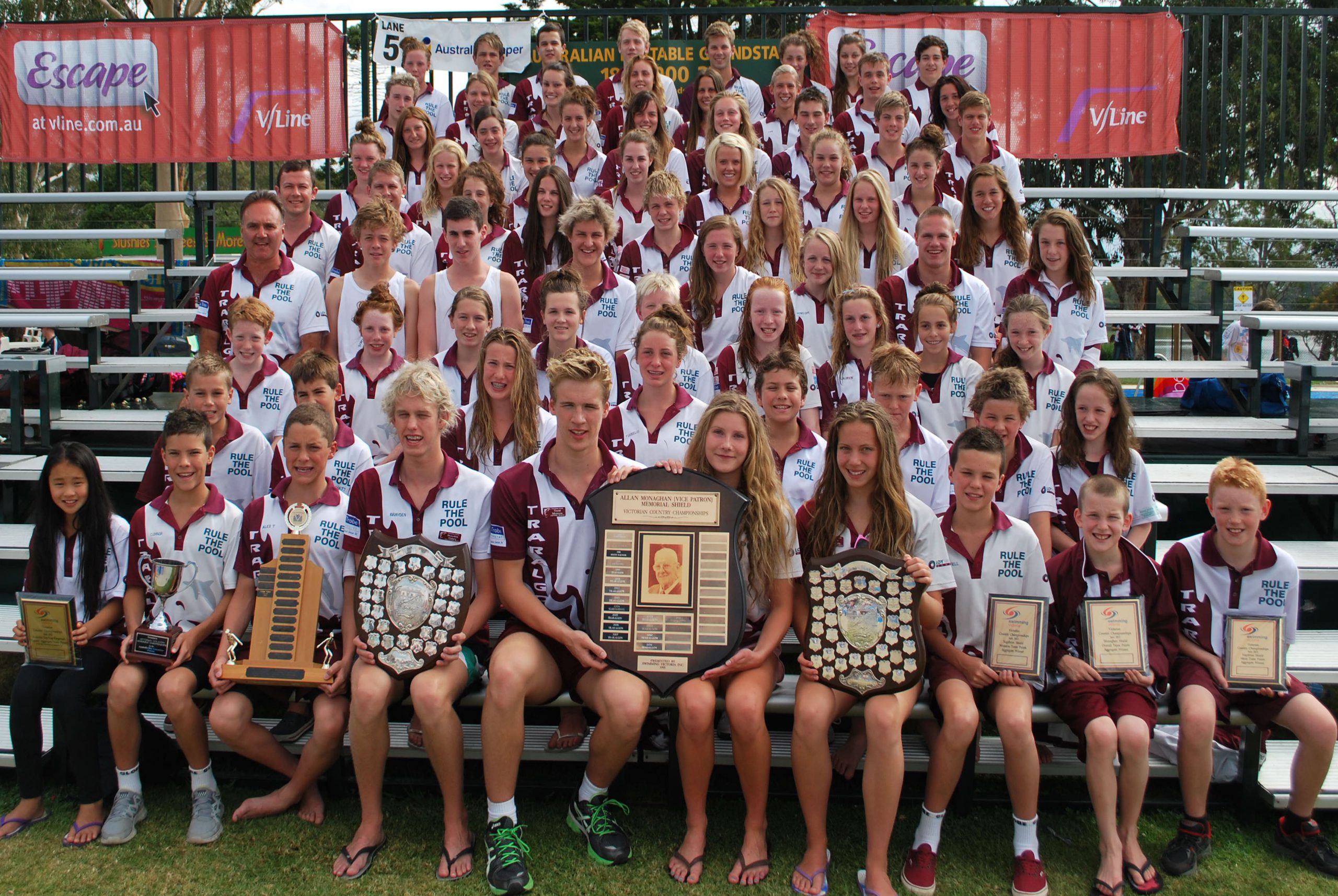 IT was lucky number 13 for the Traralgon Swimming Club as it notched up its thirteenth win in fourteen years at the Victorian Country Swimming Championships over the Australia Day long weekend in Sale.

Traralgon fielded a team of 80 swimmers, 47 of who participated in 154 finals from the 100 event program held over three days.

The club won the Allan Monaghan Shield for overall highest score with 2918 points.

Geelong placed second with 1626, and Warrnambool was third with 1120.

Traralgon coach Brian Ford was full of praise for the team, which had five swimmers ranked amongst the top ten athletes by individual score.

“We had a theme this year of teamwork gold and the performance of the swimmers in the pool, support crew and parents out of the pool was phenomenal,” he said.

“The way we exemplified the TEAM theme – Together Everyone Achieves More – resulted in our second highest point score ever; 13 victories in 14 years with the Club challenging for 10 in row in 2014.”

Alexander Tsebelis (12) won the Rob Godfrey trophy for the best performance by a swimmer 13 years or younger.

Alex won four gold and one bronze medal and broke one Victorian Country record, three event records and six Gippsland records from five events. Georgia Tsebelis (15) took out the Australia Day medal for the best performance in an individual event.

Annie Pepper (14) swam in 11 finals and won one gold, two silver and three bronze medals, breaking one Gippsland record in the process.

Also amongst the record breakers were Brayden Waltham (20) who won two gold, one silver and one bronze and broke one event record and two Gippsland records.

Michaela Cornelissen won two gold and one silver and broke one event and three Gippsland records.

Emily Beecroft (13) followed up her wonderful performance at Victorian Open Championships with three gold and one silver medals in the SWD events.

Traralgon coach Ben Geard (31) won gold in the premier 18 and over 50m Freestyle event for the 11th time.

Geard’s time of 24.74 seconds added a gold to his tally of one silver and one bronze medal.

Three teams broke records: the girls 17 and over 4x50m medley team of Courtney Ford, Lily Collins, Stephanie Morgan and Sarah Berryman broke the country and event records with a time of 2:07.95.

The boys 12 and under 4x50m medley team of Connor O’Neill, Alex Tsebelis, Locke DeGaris and Mitchell O’Neill broke the country and event records with a time of 2:11.51.

The 2014 Victorian Country championships will be held in Wodonga.