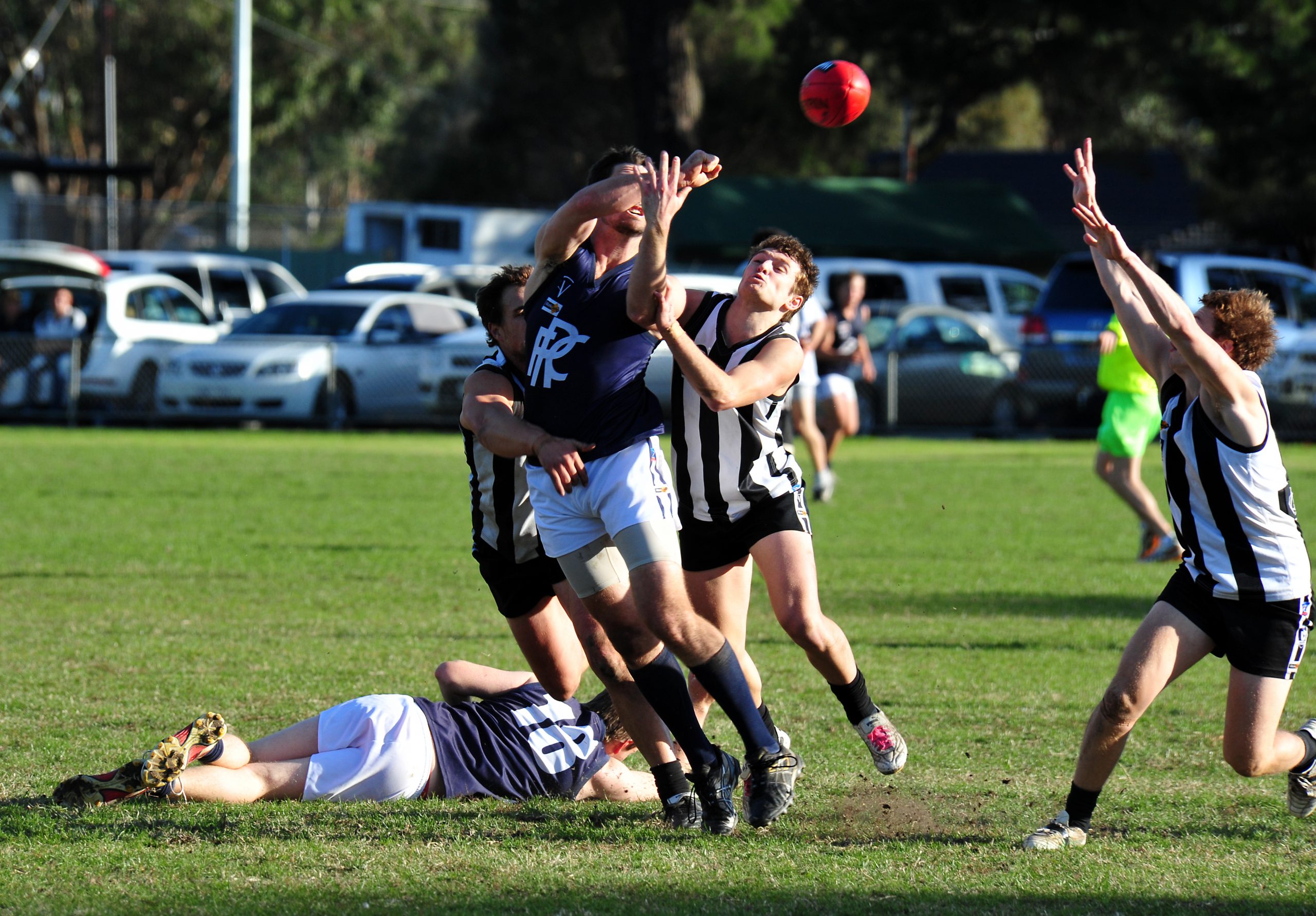 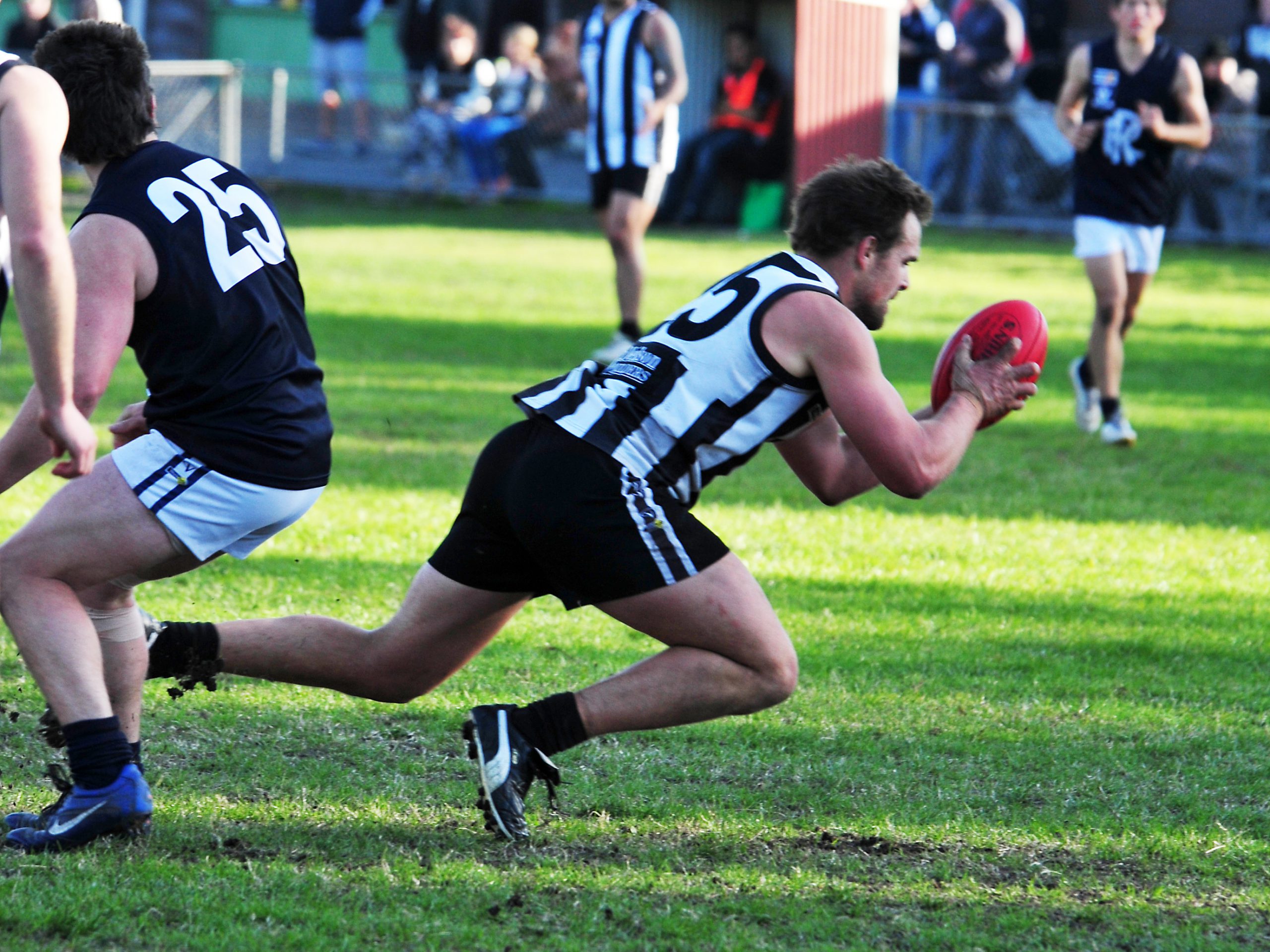 THE contest between the would-be challengers of 2013, Traralgon Tyers United, and reigning premier Heyfield saw the result decided in the closing minutes of the match when the Kangaroos snatched victory from the Bombers’ grasp by just one point on Saturday in North Gippsland football.

In a match which provided plenty, culminating in a physical final term, an understrength Heyfield fought back from nowhere to claim a season defining victory, 10.10 (70) to 10.9 (69).

In a frenetic opening five minutes of play, neither side could settle as the ball moved back and forward with little conviction between the half-backlines.

TTU’s Justin Palmer settled the visitors when he snapped around the body to register his team’s first.

Heyfield slowed down the contest, manning up on their opponents in a physical patch of play which saw the Kangaroos slowly gain momentum.

Bruised but not battered, TTU scored seconds before quarter-time when Brian Graham set up Michael Hall in front of goal.

TTU made a statement of intent from the opening bounce of the second term; Tyler Mustoe scored in the first minute of the quarter before a 50-metre penalty gifted Graham the Bombers’ third on the run as they blew the margin out to 17 points.

Scott Zulke burst from the centre of the ground, his direct kick hitting the chest of Mustoe who combined with Loprese to add another for the Bombers.

With the heat on the Kangaroos, Matt Bedggood broke the Bombers’ ascendency to goal from 30 metres.

Midfield ball magnets Pat Sharp, coach Matt Stolarzyk and Graham won the midfield battle for the quarter as the Bombers increased the margin to 20 points at the main change.

With the game in the balance, Dave Kelly was thrown into Heyfield’s midfield alongside Jack Woodland and Neille.

The move worked as the ‘Roos kicked the first two goals for the second half.

They peppered away to trail by eight points at the final change, and showed heart to steal an enthralling win.

Kodie Woodland snapped the winning goal, however the home side had to work hard to maintain its slender lead.

Bomber Dylan Loprese marked within scoring distance in the final moments but his shot at goal shanked off the side of the boot.

The Magpies swooped in the first, slamming home six goals to one to establish a strong lead in the opening 25 minutes of play.

It was a lead they would never relinquish and while challenged in patches against their higher ranked opponent, the Magpies always appeared in control as experienced forward King, defender Lochie Little, high flyer Aaron Winkler and Dean Pearce controlled the game.

IN one of the upsets of the season Boisdale/Briagolong recorded a 15-point victory over fourth-placed Churchill.

The inexperienced Bombers did not take a backward step against the Cougars who have struggled to hit the mark over the past month.

Trailing by four points at the first break, the Bombers chipped away at the visitors’ lead to hit the front by four at half-time.

With the contest in the balance, the Bombers held their nerve and went about their own game plan to outscore the Cougars five goals to four in the third.

Leading by 10 points at the final change, the Bombers’ leaders stood tall.

Adam Helmke continued his super start to the season, while Regan Tait and Josh Kennedy wore away the opposition as John Gooch lit up the forward line with six majors.

Carrying the tag of underdogs, the Saints started slowly and trailed by 20 points at the first change.

Led by Tim Johnston, Shane Morgan and Kieran McConnell in front of goals, the game swung the way of the Saints, who imposed themselves on the contest to establish a two-goal lead by half-time.

The third term was an even affair as the sides exchanged blows on the scoreboard.

Nine majors were booted however the Wildcats could not eat into the Saints’ lead.

Cowwarr hammered home seven goals to nil in the final term with Johnston causing havoc in the forward 50.

TWO points separated Sale City and Gormandale at quarter-time before the young pups came to life at the kennel to register victory number two.

In a competitive opening term spectators witnessed a tight physical contest, before the Tigers all but gave up.

The visitors managed just one further goal in the next three quarters of football.

Left flat footed, Gormandale could not counteract Sale City which built its lead at every change to record a convincing 50-point victory, 14.10 (94) to 6.8 (44).

A blistering 100 goals were scored by second-placed Gormandale in a one-sided contest against the winless Dogs.

The Tigers scored 25 goals in each quarter to hit the magic 100 mark and significantly boost their percentage.

Ladder leaders Churchill continued their winning ways with a 22-goal victory over Boisdale/Briagolong.

Sitting side by side on the premiership ladder standings, Heyfield and TTU fought out a classic finals style contest with the fourth placed Bombers securing victory 33-27.

Cowwarr registered its third win of the season with a tough contest against Woodside, while Rosedale made it two on the run with victory over Glengarry.