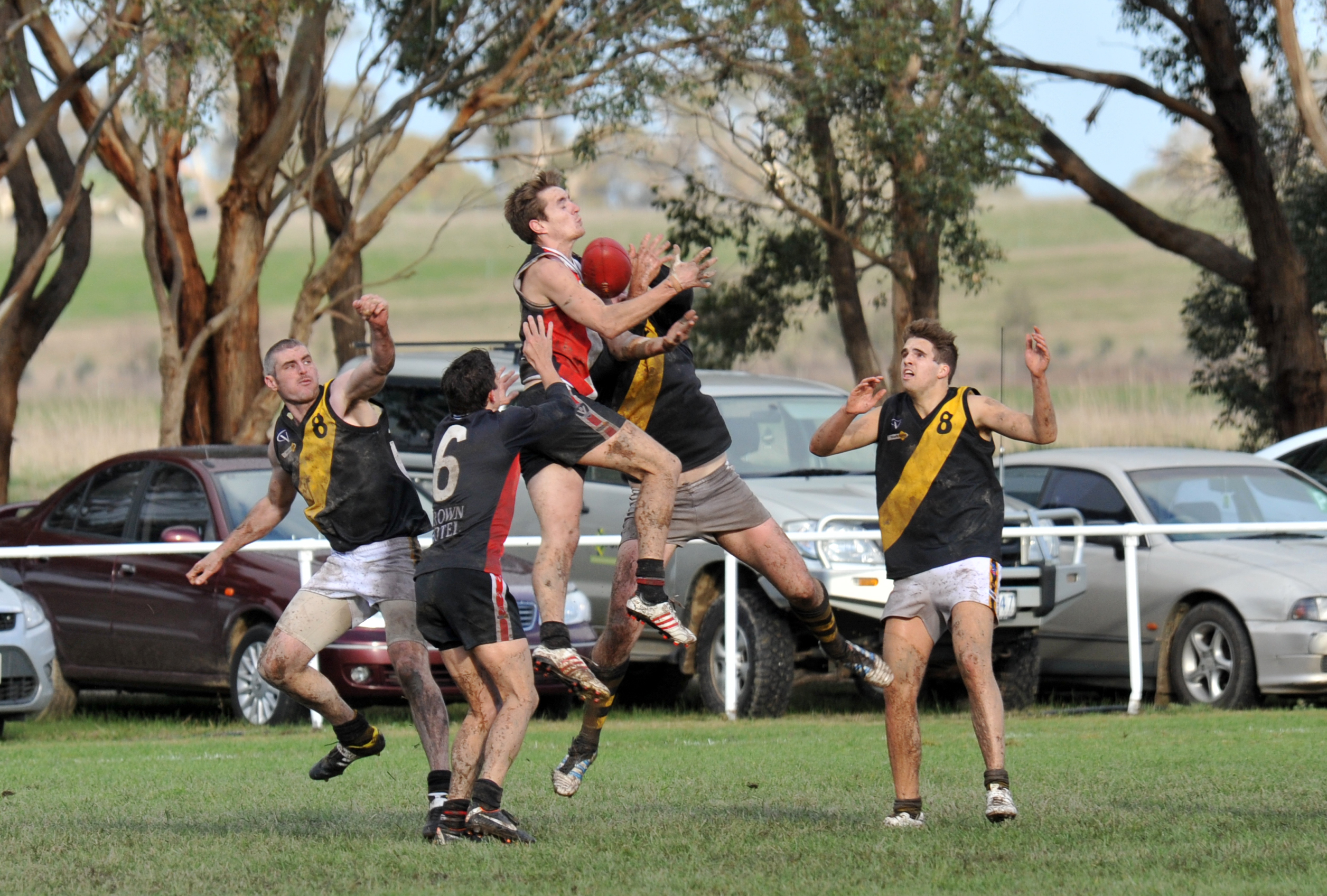 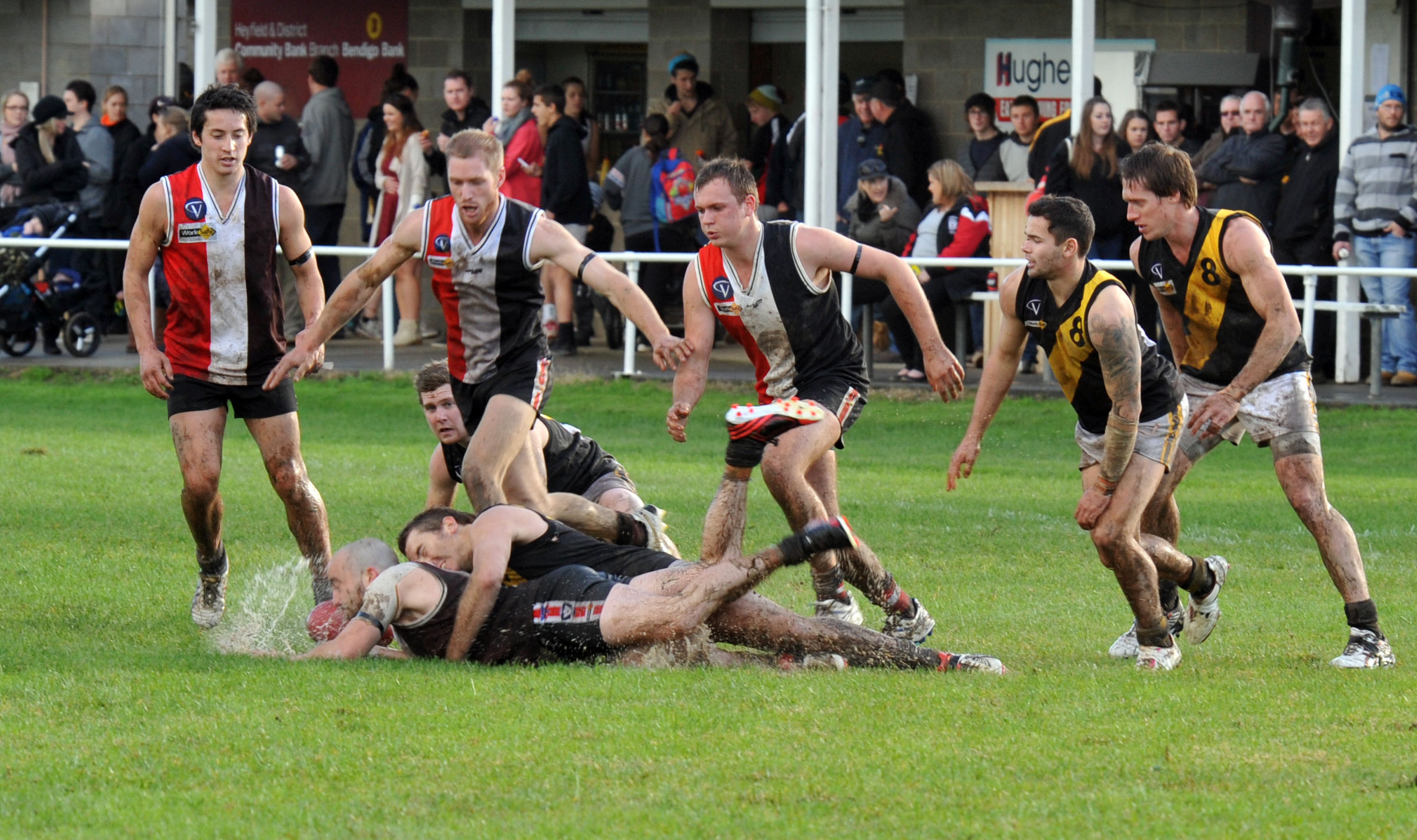 The North Gippsland season’s first draw was fought between Cowwarr and Gormandale, who were locked at 53-all at the final siren.

The Saints led for the majority of the contest before the Tigers gained the upper hand to lead by eight points at three-quarter time.

However, Gormandale was held goalless in the final term as the Saints mounted a late surge.

With the scoreboard reading 7.11 (53) with minutes left on the timekeeper’s clock, the sixth-placed Saints were well held by a fearless Tiger outfit.

The result has left the Saints two points outside the top five and will face fifth-place Churchill on Saturday.

GLENGARRY has snatched victory from the jaws of defeat against Boisdale-Briagolong, after trailing for more than three quarters.

The Magpies trailed by two points at three-quarter-time, before finally overpowering the Bombers at Boisdale Recreation reserve to win, 8.16 (64) to 6.7 (43).

Strong tackling was the highlight of the opening term.

A kick on the wing from Bombers’ best on ground Adam Helmke hit the chest of full-forward Danny Pratt who opened his account with a kick from about 30 metres.

The Bombers made the most of their first entry forward in the second term to extend the margin to 20 points.

Pat Gordon roved the pack to slot through a drubbing major to extend the lead to 26 points.

Michael Lush opened the Magpies’ account in the opening minutes of the second half.

Glengarry kept the Bombers scoreless in the final quarter, with Engley scoring his third goal which was followed by a long shot at goal by Dean Brooks. Another goal to King sealed Glengarry’s third consecutive victory.

The match between the competition’s biggest improvers, Woodside and Traralgon Tyers United, was touted as one of the contests of the round.

However, the eagerly anticipated match failed to live up to expectations after quarter time.

The Wildcats slowly built their ascendency and took control of the contest to run home comfortable 56-point victors.

Unveiling new recruit Tim Aitken, the visitors would have been confident the added ammunition in front of goal would have served them well, but it was Wildcats’ Justin Staley who stole the show.

Woodside skipped away to an early 14-point quarter-time lead, with Rob Michaelides gathering many possessions and standing tall in front of goal.

The Wildcats failed to be troubled in the second half as the Bombers managing only two majors, one in each term, as they watched Woodside secure its sixth win of the season.

Heyfield is now two games clear of second-placed rival and next week’s opponent, Rosedale, following its 17-point win over Churchill.

It was far from one way traffic in the contest as the Cougars tested the resolve of the competition’s number one team.

Heyfield looked the goods early to lead by two straight kicks at the first change.

Churchill dug deep to turn a two-goal deficit into a 13-point lead at half-time.

The Cougars, led by coach Tim Darby and goal sneak Joey Whykes, came to life with five goals to one to wrestle back the lead. The goals dried up for Churchill in the premiership term as it could only watch as Kodie Woodland and Jesse Bedggood got their hands on the ball in front of goal to regain the lead for Heyfield, and hold on to it to record the victory.

Neighbouring clubs Rosedale and Sale City played for the Slattery-Burley Cup, named in honour of two of the clubs’ devoted members.

It was all one-way traffic early as the visitors made the most of their chances in front of goal to establish a handy four-goal buffer at the first change of ends.

The Dogs did not drop their guard as they mounted a second term challenge to reel the margin back to seven points.

Mitch Bennett and Nic Grainger led the charge in the third term on the scoreboard as the side marched away to a slender five-point lead at the final change.

The Dogs tired to hold on, but Rosedale slotted home late quarter goals to record a 10-point victory.