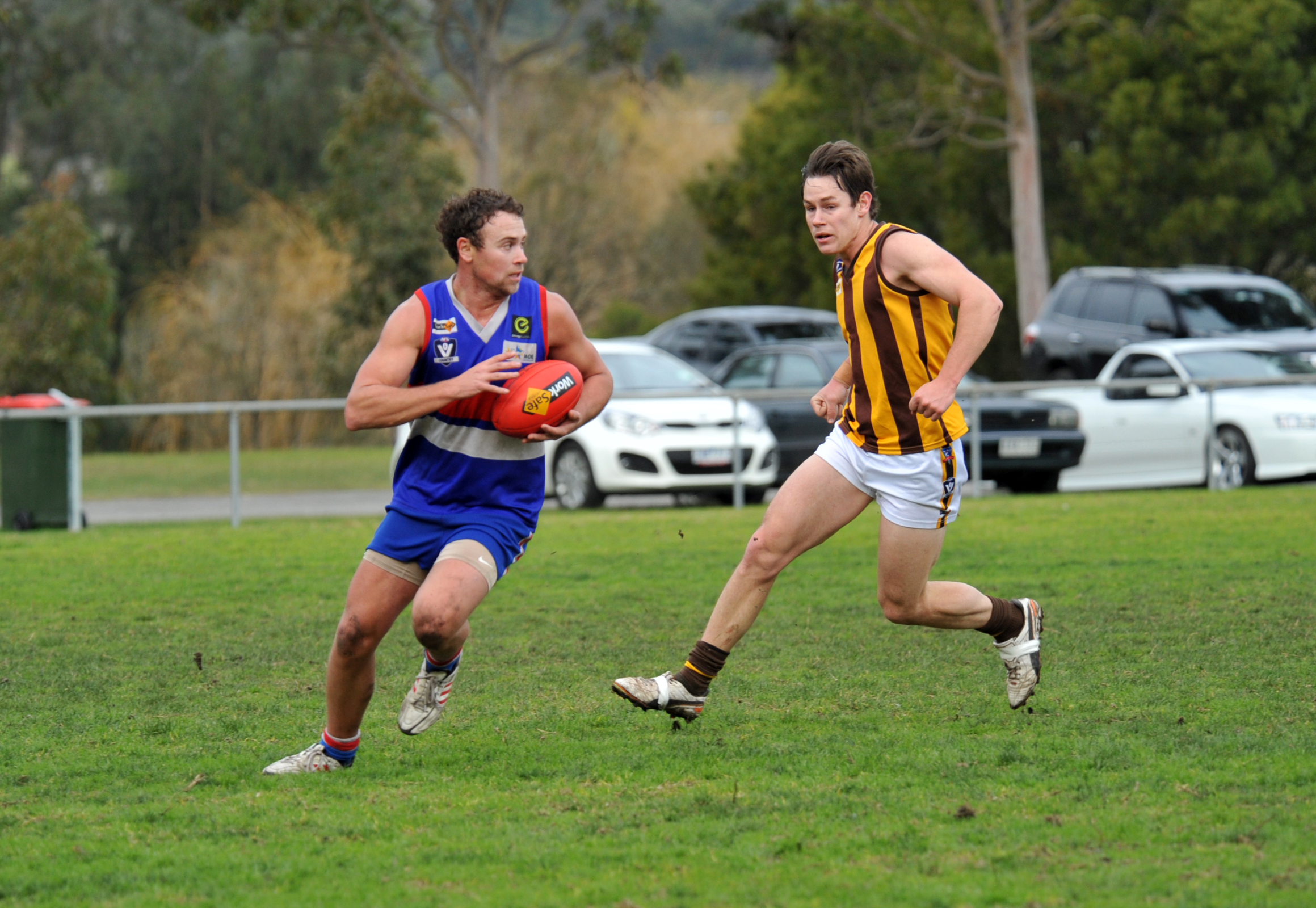 BIG scores were the order of the day in Mid Gippsland football as the previous week’s appalling conditions gave way to ideal weather.

Forwards had a field day as the leading teams asserted their authority; Tim Traill kicked 15 for Mirboo North and Adam Kennedy 11 for Newborough, both club records against their respective opponents.

The closest match was Boolarra’s 14-point win over Hill End to give the Demons fifth place on the ladder, while all other matches were one sided with the favourites taking the points.

Newborough amassed the highest score with 27.14 to Morwell East’s 6.1, but the biggest winning margin was delivered by Mirboo North which, after two successive losses, bounced back to rout Thorpdale by 164 points.

The East could not take a trick all day as their three teams were trounced and fourths had to forfeit. The Dogs powered away in an eight goal first quarter and it was one way traffic from there as Newborough overpowered the hapless Hawks. Adam Kennedy scored a personal best goal tally for Newborough with 11 goals, equalling John Creighton’s record against Morwell East in 1976. Kennedy had three opponents but none could stop him. Newborough used the space to great effect as Chris Hancock, Jeremy Cattanach and Jarroyd Bennetts gave the Dogs a boost around the packs.

Morwell East had no answer and struggled when going forward; the tight Newborough defence limited the East to just six goals for the match.

YINNAR sits in third position by 7.3 per cent after a 129-point win over Yallourn Yallourn North.

The Magpies led throughout and did not let YYN play its preferred style of football.

Yinnar restricted YYN to three behinds up to half-time before the Bombers went crazy, kicking 2.5 in the third.

The fightback was short lived as Yinnar added 10.4 to 2.5 for the half to run out comfortable winners.

MIRBOO North bounced back from an indifferent fortnight to crush neighbours Thorpdale by 164-points and retain top spot on the table.

High flying forward Tim Traill scored 15 majors in an awesome display of goalkicking, beating his own record of 13 against Thorpdale last year. Seven others joined in the frenzy as Mirboo North amassed 25.11 to Thorpdale’s 2.6.

The Tigers started slowly but built their score steadily as the day progressed, adding nine, four and seven goals in the next three quarters. Thorpdale could not score in the second quarter, managed four behinds in the third and raised a cheer from the faithful with a goal in the final quarter.

The win gave Mirboo North a 42 per cent buffer on top of the ladder from Newborough and it should finish minor premier with an unbeaten run to finals.

BOOLARRA and Hill End fought out the closest contest of the round with pivotal ladder position up for grabs. The Demons led at the first change by a goal but Hill End fought back to trail by a point at half-time.

Boolarra cranked it up in the third quarter to produce 4.4 to 1.3, establishing a handy lead going into the final term.

With a never say die attitude the Hillmen fought back to get within two points near the death, but late goals to Boolarra gave them reason to celebrate as they locked down fifth position and a chance in the finals.

The Bloods struggled in the first term as the Yarragon youngsters matched it with the favourite and just six points separated the two by the first break.

Trafalgar lifted to add three goals in the second term and kept the Panthers scoreless.

Mick Gelagotis bagged five goals in a polished display. Trafalgar opened up with guns ablaze in the final quarter but players started to spray their shots as the Bloods scored 6.7 to one goal to win by 71.