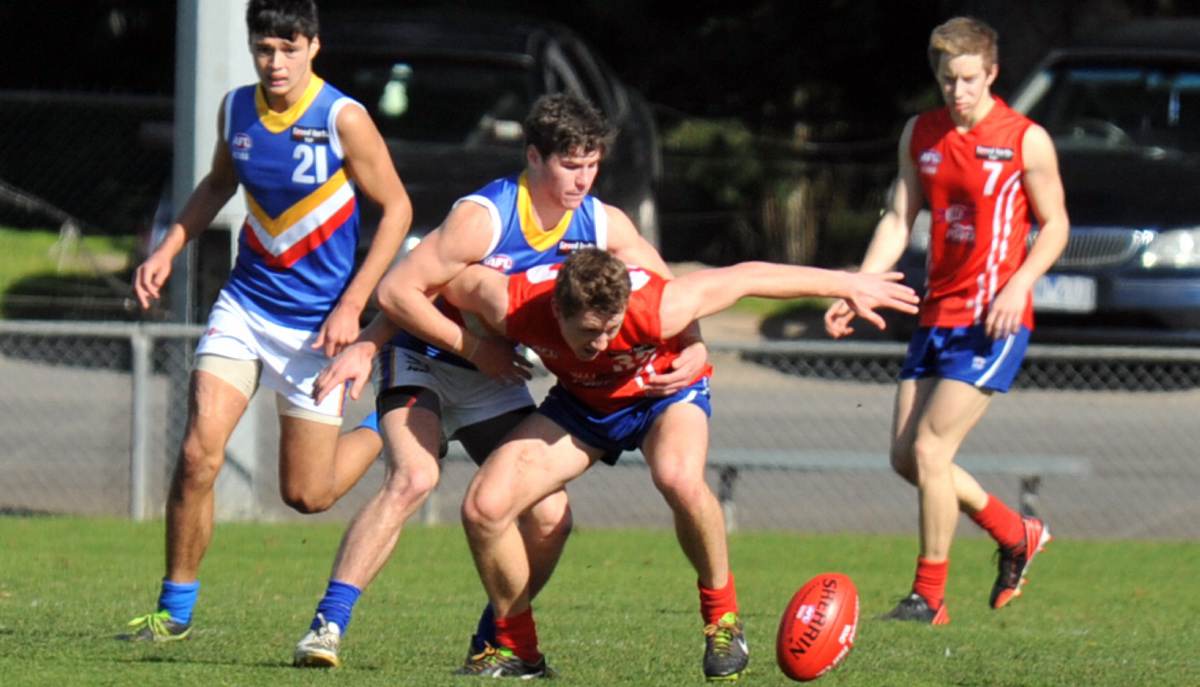 LOY Yang B Gippsland Power suffered its third straight loss of the 2013 TAC Cup season against the highly rated Eastern Ranges side on Saturday in front of a large Morwell crowd.

The Power went into the match without three key players while the Ranges outfit was missing gun forward Tom Boyd, who is widely tipped as the number one draft pick this season.

Absent for the Power were TAC Cup leading goal kicker Josh Scott, who was playing with Casey in the VFL, Lukas Webb (school football) and Alex Saunders, whose facial injury means he will miss the rest of the season.

The Power selected Traralgon under 16 player Tate Marsh for his debut, following an excellent showing with the Power development team earlier in the season and impressing in under 18 training.

The match saw the Power play two separate styles of football which allowed the Ranges to hang in the contest and later take control.

The Power coaches had done their homework thoroughly and employed the right game plan for the opening quarter.

Some clever work by Declan Keilty set up Lachie Channing for the Power’s opening goal, and Keilty again provided for Jordie Cunico to snap truly shortly after.

The Power was dominating play and Nathan Dennison went long and direct to find Jake Thomas for another goal.

Keilty added one of his own before the Ranges replied on the rebound late in the quarter.

Alex Carr took advantage of a free kick and 50 metre penalty to goal after the siren and the Power went to the first change 30 points up.

The opening minutes of the second term saw the Ranges score two “soft” goals after the Power gifted easy possessions.

The Power recuperated to apply excellent forward pressure, resulting in a critical goal to Ed Morris, but was sacrificing long and direct entries in favour of extended hand pass chains.

Key forward Keilty again displayed great skill to combine with Morris for another goal and it appeared the Power was back on track, but the Ranges scored another easy goal direct from the centre bounce.

A deep forward thrust by Josh Cashman allowed Keilty to take a fine contested mark and kick a third major, but the Ranges again capitalised on soft defence to score after the siren and reduce the margin to 23 at the half.

The Ranges opened the third quarter scoring easy goals while the Power, in contrast, was wasting its opportunities.

It took some fine play by Aaron Heppell to allow Tom Muir to kick a vital six points and, as if inspired, Rohan Hildebrand kicked another to restore the status quo.

Ranges again stepped up to the challenge and kicked true before Dennison and Cunico created something from nothing for Muir to goal.

Power’s three-goal lead vanished within minutes due to minimum defensive pressure and poor decision making, leaving the home team just one point up at three-quarter-time.

With the match in the balance the Ranges seized the initiative by scoring three goals to punish the Power for some poor one-on-one commitment.

Against the run of play Morris, Carr and Ash Di Ceiro combined to see Carr kick a goal to put the Power back into the contest.

With the game up for grabs, the Ranges again exploited poor defence and put the issue beyond doubt.

Thomas scored a late goal to reduce the final margin to 10-points, but the Ranges held on for a deserved win.

On a day when the Power had to make some vital positional moves, Muir went to centre half-forward and rose magnificently to the challenge. As he has done all season, he played unselfish, team football, kicked goals and worked tirelessly to set up others with his skills and strength under pressure.

Another to adapt to an unfamiliar position was Jack Leslie who moved to key defensive posts after being the team’s leading ruckman all season.

He defeated his opponents and backed himself to win possessions and use them to generate attacking play for the side. Defender Mitch Mustoe returned to the side after suffering a severe concussion and resumed his crucial role of stemming the influence of dangerous opponents with dogged defence.

Keilty has shown great versatility all year and again demonstrated the willingness and ability to assume a variety of important roles.

He was a potent forward, did some insightful ruck work and assumed defensive jobs when the team needed stability and disciplined play.

Dashing half-back Heppell was another to outplay dangerous opponents, using possessions wisely in the tightest situations.

The Power now faces a strong challenge in the Northern Knights at Preston on Sunday.

The Knights narrowly defeated the highly rated Geelong Falcons last weekend and will be keen to add the Power’s scalp to the trophy chest and consolidate ladder position.

The return of Scott and the possibility that gun forward Ben Kearns may be available after recovering from a broken hand should bolster the Power’s stocks.