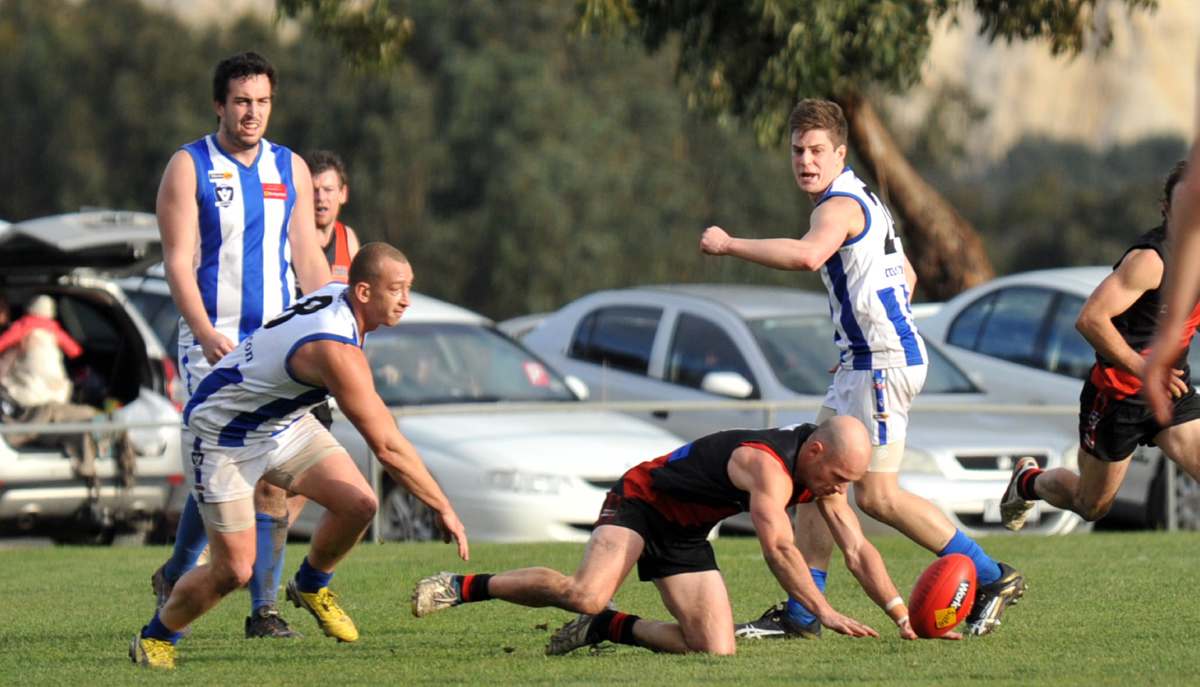 GLENGARRY came from behind against Rosedale to seal a third win on the fly in its quest for a top three finish in North Gippsland football.

On a day where goals were hard to come by, Glengarry forward Josh King registered five, while Mark Engley managed just one despite numerous shots on goal.

The Magpies made a match-winning move in the third term when they turned a two-point deficit into a 22-point lead by the final change.

Rosedale started the contest on the front foot, booting the opening major of the clash, while Glengarry had little impact on the scoreboard before strong defensive pressure saw play contained within the Magpies’ 50 metre arc.

The Blues registered the first of the second term and kept Glengarry goalless.

The Magpie forwards peppered away at the sticks but a strong wind blowing down the middle of the ground caused many a shot to miss the target.

In an enthralling midfield battle, the Magpies swung the momentum in their favour as coach Ryan Potter led standout trio Lochie Little, Chris Panayiotou and Robbie Cahill in the fightback.

Ben Truin amassed possessions and consistently cut off Rosedale’s drive out of defence but it was Dean Pearce who collected the three votes in a best on ground performance.

LEADING by 10 points at half-time against Gormandale, a young Sale City outfit showed staying power to build a match winning lead in the third, one they would not relinquish.

Coming into the match on the back of a stirring come-from-behind victory, the Tigers were favoured to continue their winning form against a hungry Dogs line-up that had not registered points since round 11.

In a competitive opening term spectators witnessed a tight physical contest, which continued in the second as the Tigers kept with the Dogs to set the stage set for an enthralling second half.

Left flat footed after the main change, Gormandale could do little to counteract the relentless running brigade of Sale City, which built on its half-time lead with a five goal to two term.

HEYFIELD claimed bragging rights in the top of the table clash against TTU with a four goal victory to firm its hold on the minor premiership.

Trailing at quarter-time, the Kangaroos came out strong in the second to turn the tables and take a two goal lead into the break.

After failing to make best use of the footy in the opening term, the Bombers were left to watch as the Kangaroos dominated the statistics after quarter-time.

Kangaroos coach Adrian Cox was well held by Callum Laurie-Rhodes, but still found plenty of the ball along with Mitch Dowse and Jack Woodland.

The visitor built on its lead in a low scoring second term, which featured Brett Szabo as a prominent threat in the Kangaroos’ forward 50.

A couple of early majors from the Bombers in the final term kept them in the contest, but the Kangaroos continued to wear down the home side and finished comfortable winners.

WOODSIDE proved too classy for Cowwarr in its late run towards securing a finals berth.

Dropping the points in the early season encounter, Woodside went into the contest carrying the underdog status against the fourth placed Saints.

The tag did not stick for the sixth placed Wildcats who appear to have reclaimed their early season form over the past fortnight.

After establishing an eight point lead at the first change, the Wildcats’ second term extended the margin to 23 points at the long change.

The game swung toward the home side after half-time as the Saints used the conditions to slam home six goals and reel the deficit back to less than two kicks.

Led by Justin Staley, Rob Michaelides and Brett Kerr in front of goals the Wildcats rallied to make the final term their own and held the Saints goalless.

The win drew the Wildcats equal on points with fourth placed Churchill and Rosedale.

Starting out slowly on the scoreboard, the Cougars took a term to settle into the contest before slamming home six majors to none to set the tone for the remainder of the match.

Leading by more than 30 points at the long change, the Cougars did not slow down in the second half and continued the barrage on the scoreboard, however the Bombers matched the pace with eight of their own.