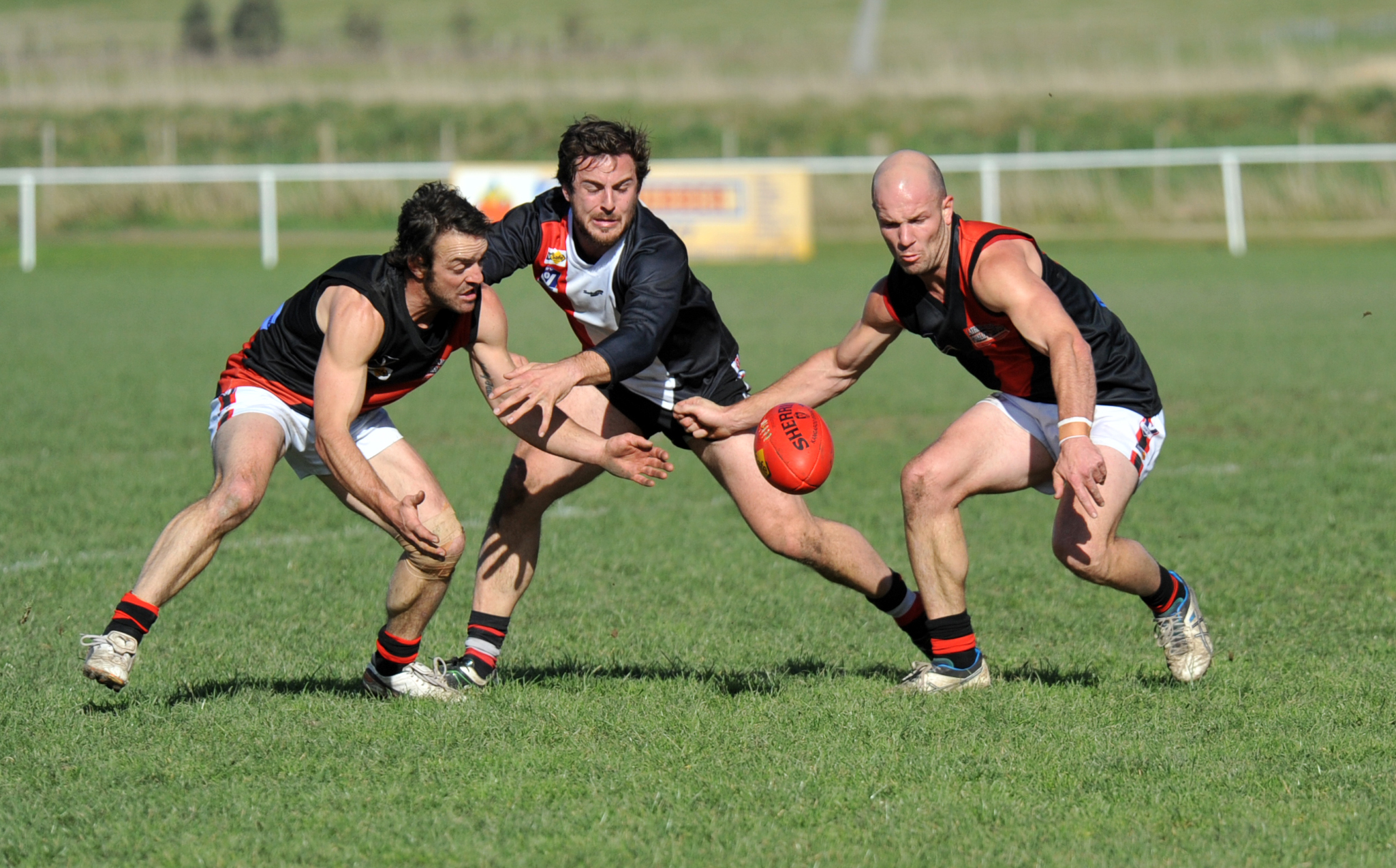 FIELDING six under age players in its side to take on Rosedale, few gave the baby Boisdale Briagolong Bombers a chance before the opening bounce in round 17 of North Gippsland football.

Despite their inexperience, the green inclusions took the contest to the Blues, who came into the match on the back of three consecutive losses.

Rosedale started strongly and scored from the opening bounce.

Winning the centre clearance it again drilled forward to score its second in as many minutes as the Bombers defence, led by Leigh Fulford, felt the effects of Andrew Flanagan and company early.

Peppering away at the sticks relentlessly, the game could have been all over in the first 15 minutes, however inaccuracy ensured the Bombers kept with the fifth-placed Blues. Nicol Sandison registered the Bombers’ opener from their first foray forward and it was quickly followed by a major to John Gooch.

The Bombers’ desperation was evident in a great chase down and tackle by Josh Kennedy on Barney Mitchell, which resulted in the home side pushing the ball forward.

Boisdale Briagolong added a third to trail by a point at quarter-time.

Rosedale did not waste any time after the break; Flanagan opened the scoring to extend the margin to three goals.

The Bombers reeled one back only to have Rosedale extend the lead minutes later with its sixth, the margin blowing out to 32 points.

Seemingly down and out at half-time, it was a different Bomber outfit that blew the game open in a stellar 10 minutes of second half play. Four straight goals to Boisdale Briagolong caught Rosedale off guard, as the margin shrunk to nine points before the Blues clicked into overdrive.

Flanagan and Scott Johnstone registered majors, as Chris King, Luke Stuckey and Jake Power began to dominate the one-on-one contests in the midfield.

Rosedale slammed home seven unanswered majors from the midway mark of the third term to take the win. Bomber Macklin Raine held his own in the ruck contests; the 16 year-old was pitted against the experienced Jon Cantwell who was named among the Blues’ best players.

A BARNSTORMING Woodside booted five goals to nil in the first quarter to shake off talk about their end of season ambitions following last Saturday’s surprise defeat.

Led by Justin Staley, Damien Kerr, Adrian Fazioli and Rob Michaelides, the side boasted plenty of ammunition in front of goal and it used a strong breeze to good advantage to flatten Glengarry.

After winning the toss and making the most of their chances in a psuedo-elimination final, the Wildcats led by 28 points at the first change.

The Magpies registered their first major in the second and reeled the margin back to 16 at half-time.

The sides exchanged blows on the scoreboard in the defining third term; a total of 10 majors were scored as Glengarry’s Josh King made his mark and stretched the home side’s defence.

HEYFIELD captain Dave Kelly finished his gruelling 100 kilometre run, raising funds for his unwell one year-old daughter Ivy, in time to watch his side seal a 48-point victory over Gormandale.

Booting 11 majors in the opening half, the Kangaroos struggled to score after half-time and registered just one goal in the final term to be outscored by the Tigers three goals to one.

The minor premiers struggled to find the targets in front of goal after a dominant opening half, while at the other end of the ground it was the same tale with only eight behinds scored between the sides.

The Tigers came out hungry in the final term after two goalless quarters as they looked to regain some respectability on the scoreboard, slotting home three goals to one.

However, the Kangaroos’ dominance in the opening half served them well as they coasted home to a 14th win of the season.

AFTER moving into the top five last week, Churchill was forced to work hard for the points and ensure its finals ambitions stayed alive when Sale City took the contest to its more fancied opponents.

The much-improved young pups rose to the occasion against a side that handed them a 131-point thumping in their earlier encounter.

The underdogs came out strong booting five goals to four in a blistering opening term.

Holding strong the Dogs were not phased as the Cougars came at them to draw to within seven points at the main change.

Led by Corey Oliver and Luke Hedger, the Dogs kept with Churchill in the crucial third term to maintain the lead, albeit by three points at the final change.

With their end of season fate in their hands the Cougars, through goals from Ben Kearns and Dean DeGroot, added seven majors to two in the final term to run home five-goal victors.

Struggling to make the most of their opportunities in front of goal, the Bombers will be ruing the one that got away and now find themselves locked on 40 points with four other sides.

The match was evenly poised at the first change.

Both sides’ desperation at the ball was evident and the Saints took a 13-point lead at the break.

The Bombers regrouped after a sluggish start and worked hard to match the home side before the main change.

Booting 4.8 (32) in the third term, the Bombers took the lead, however costly errors in front of goals prevented the side from imposing much-needed scoreboard pressure.

The Saints regained composure at the final change and came out firing. Cowwarr regained the lead to ensure it remained in contention for a finals berth.

Tim Johnston finished the match with three majors to take his season tally to 61, 12 ahead of the competition’s next highest goal scorer Justin Staley.