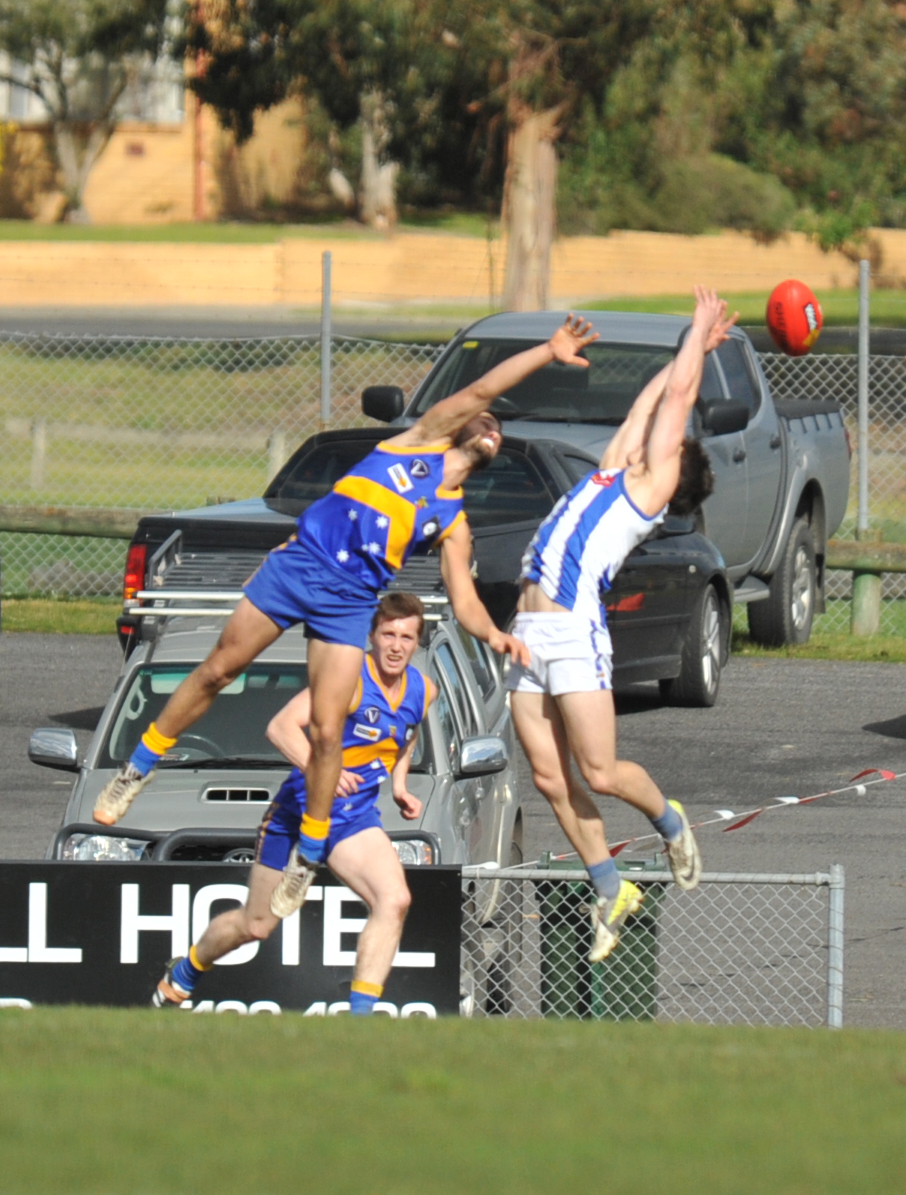 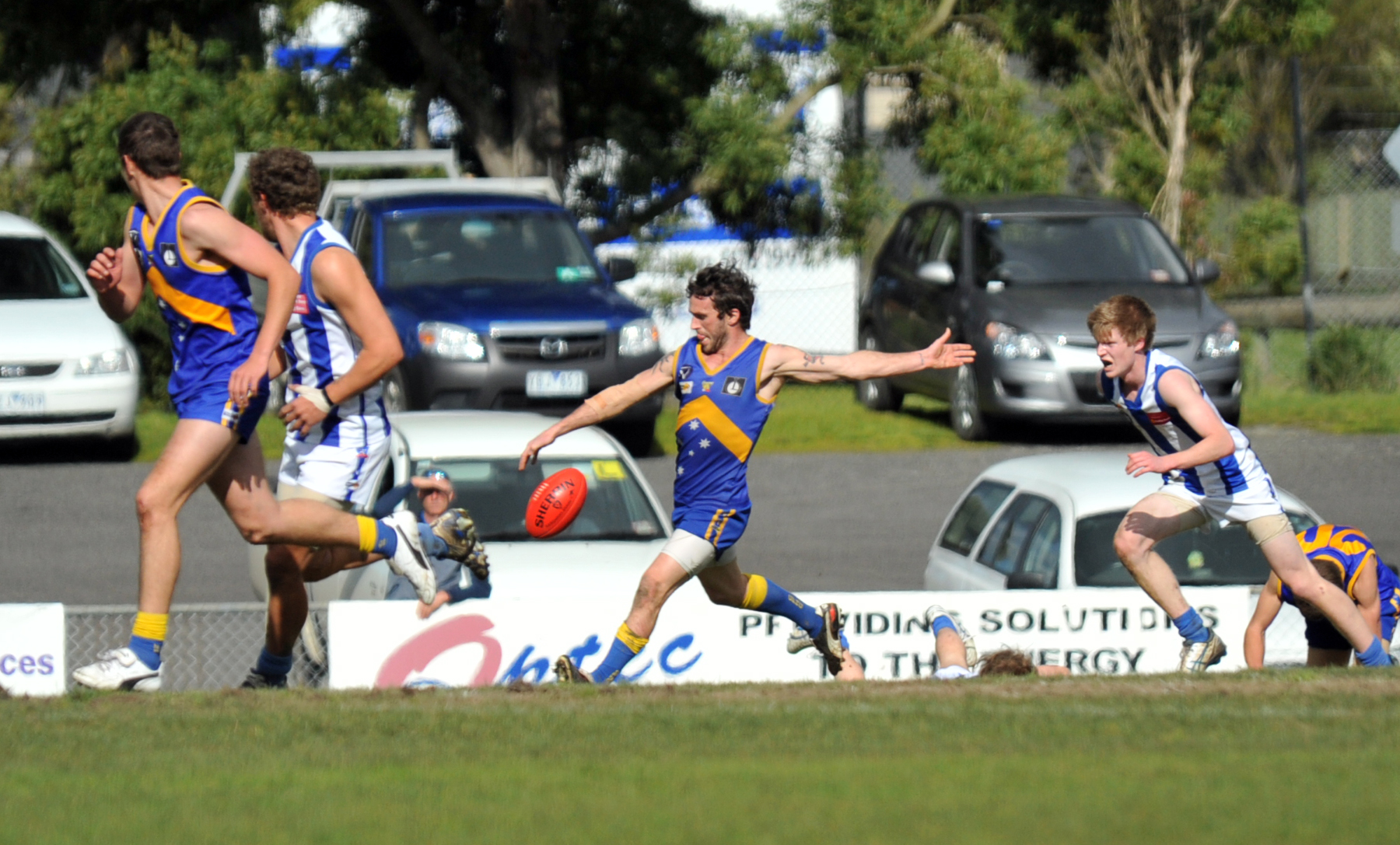 Their ladder proximity was reflected in the final scoreline; three points was the margin.

In a dramatic climax, the final kick of the day saw the Bombers steal finals football from the Wildcats’ grasp.

Trailing for the majority of the contest, the Bombers mounted one of their greatest escapes to book their first finals appearance in nine seasons with a 13.12 (90) to 13.9 (87) win.

For the Wildcats the bitter result was nothing short of heartbreaking.

After winning their last three on the run the visitors were found flat-footed in the opening minutes of play.

TTU’s Tyler Mustoe was the first to drill the ball forward but his shot at goal missed.

Brian Graham had no trouble from the pocket as the Bombers made hay early.

Both sides worked hard to lock down play, the ball swaying back and forth between half-backlines before Woodside opened its scoring with its first movement forward for the contest.

Rob Michaelides made it two in a row for the Wildcats when his shot rode the wind to split the sticks.

Team mate Adrian Fazoli added another in a run of five unanswered majors for the visitor, which held a commanding 20-point lead at the main change.

The Wildcats continued the onslaught in the second half.

Damien Kerr registered the side’s sixth major as the engine room of Matt Scholz, Kerr and Fazoli began to dominate.

Bombers coach Matt Stolarczyk provided the spark his side needed, reeling the margin back by a goal before Wade McNeill added another.

Graham kicked his second of his four majors, a nice shot on the run, to reduce the margin to less than 10 points at half-time.

The battle intensified in the third term in hard physical clashes as neither side left anything on the ground.

The Wildcats won the battle in the premiership term, outscoring the Bombers by one major to lead by three straight kicks.

With season ambitions on the line, the Bombers fought hard to ensure their chances remained alive.

With their club leaders standing tall,TTU gained command in the final 20 minutes of play as coach Stolarczyk and Graham took the game on. Gun midfielder Pat Sharp dominated possessions as he held the opposition, Luke Middleton was working hard around the ground and was crucial in the pack contests and Callum Laurie-Rhodes played a pivotal role in the backline.

Booting four goals to one the Bombers reeled in the margin, overrunning the Wildcats in the dying stages.

With finals in sight, Saturday’s match against long time foe and flag favourite Heyfield was a must win for the Cougars, who chipped away at the scoreboard early to remain in the contest.

The Kangaroos struggled to shake the visitors early in a physical opening term and had difficulty finding the posts.

A strong third quarter Cougars showing set the tone for the remainder of the game.

Churchill did not look back booting 5.7 (37) to nil to boast a three goal lead at the final change, a lead it would further extend in the final term to register a 26-point win and secure a position in the top five.

Mick Higgins led from the front and was well supported by Brad Knowles in and around the contests.

Andrew Brown provided Churchill with first use of the ball in the ruck while captain Chris Williams was a workhorse in the engine room.

DESPITE claiming the points against Gormandale, it was tragedy for Cowwarr who, after an indifferent month of results, fell two points shy of finishing in the top five.

Needing to win and for other results to go their way, the Saints dominated the first quarter and held the Tigers scoreless.

Led by Ben Plozza and Tim Johnston in the forward line, who registered goals early, the Saints put on a clinic as the Tigers struggled to repel the barrage.

The second term was a different story as the Saints all but halted, scoring just one goal while the Tigers found their groove to outscore the visitor three goals to one.

Inspired by the half-time address form coach Luke Cooper, the Saints were again on the march with a solid third term performance putting the result beyond Gormandale’s reach.

The Saints went on to win, 18.11 (119) to 8.9 (57) with experienced servants Shane Morgan, Brett Street and Cory Bannister named among the Saints best.

It was all for naught though as Churchill’s win over the ‘Roos left the Saints out in the cold.

The Bombers scored just one major in three terms of football before matching the Magpies in the final quarter.

The baby Bombers were no match for the Magpies, who were desperate to maintain a hold on a top three finish and a place in the qualifying final.

Hitting the ground running the home side booted five goals in the opening term, and a further seven before half-time extended the lead to 70 points at the long change.

King was on song in front of goals in the third and Chris Wangman and Lochie Little dominated play as the home side registered six majors, kicking on to win comfortably.

For the visitors John Gooch was judged best on field and finished the match with two majors.

ROSEDALE made light work of Sale City; the Blues built a 10 goal lead by half-time and extended it to 65-points by the final siren.

The Blues posted three unanswered majors in the first term, before adding another six after quarter-time.

Three goals to Jack Wyhoon, Chris Graham, Brad Caldwell and Andrew Flanagan kept the Blues humming while Sale failed to register a major in the opening half of play.

Easing their foot slightly off the throttle, the Blues were closely matched in the second half with Joel Brayshaw and Mitch Bennett booting two apiece to ensure a more respectable score line at the final siren.