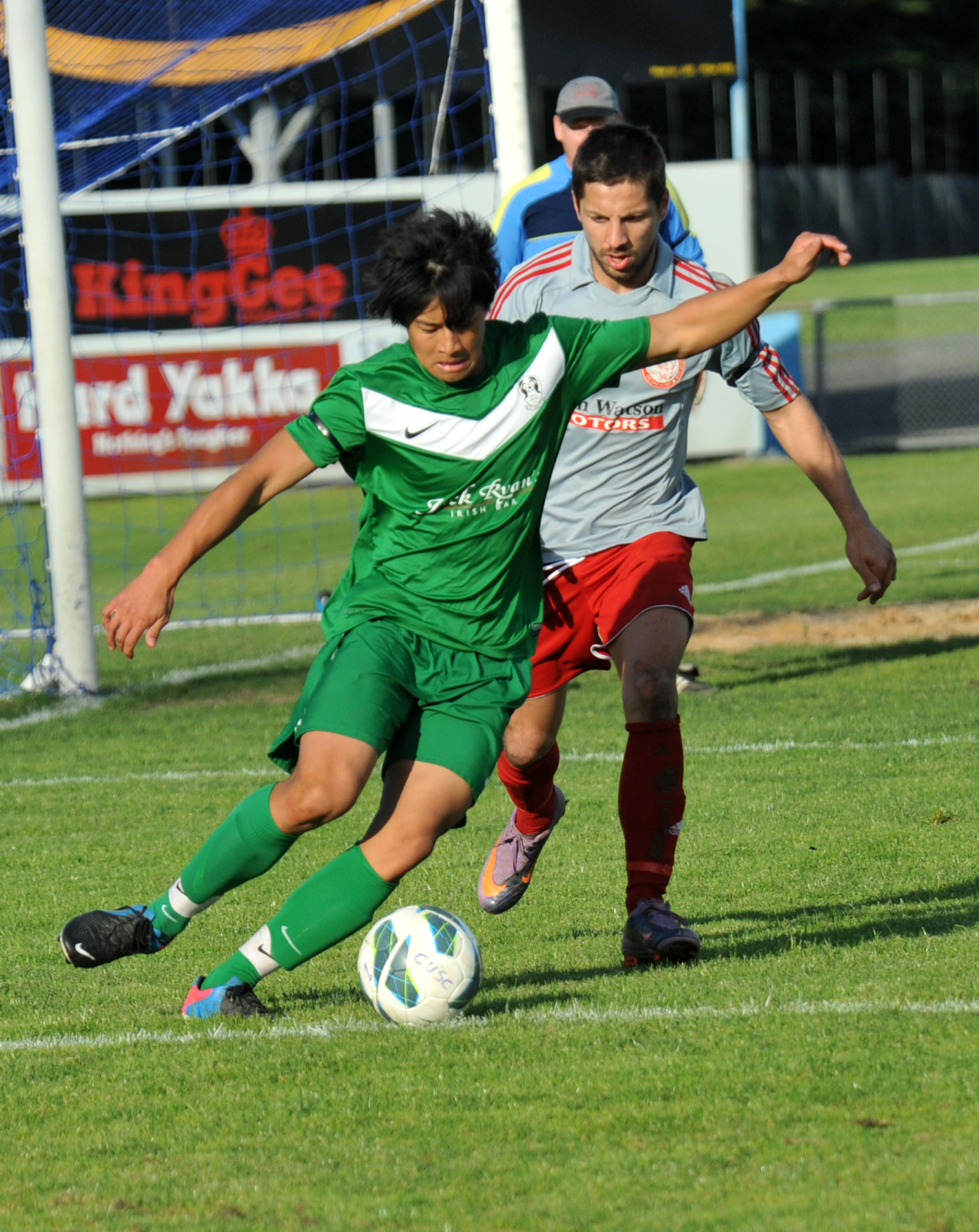 Fortuna hosted Moe in a game both teams needed to win to keep in touch with the top sides on the ladder.

The match began at a lightning quick pace with long wing drives going in both directions.

Moe opened the scoring with a long cross that found the head of Luke Bathgate after a misguided Fortuna defensive header gifted possession to the Red Devils.

Ten minutes later Fortuna received a free kick just outside the 18 yard box, which Josh Tanti hit past the keeper but not the crossbar which denied him an equaliser.

At the 34 minute mark Moe pinched a second from a scrappy scramble in front of the goalmouth, which fell to Bathgate for his second of the day.

Fortuna came out more determined in the second half.

Three minutes in Fortuna received a penalty that Tanti put away with confidence. Fortuna had a great 25 minutes but was unable to put anything on the scoreboard.

At the 76 minute mark Moe finished the match off with a third goal through Matt Shearing to put the game out of Fortuna’s reach, 3-1.

Monash took the spoils on the road against Tyers in a game where the visitor controlled the match from start to finish.

Within five minutes of the opening whistle Ethan Lawrence put the Wolves ahead. After a rasping cross from the left boot of Brendan Ruddell, the 17 year-old striker had a simple tap in at the far post.

Lawrence soon doubled his tally after a scramble in the box and a few blocked shots from a desperate Tyers defence fell to the frontman.

Lawrence sealed his hat-trick before the 20 minute mark after a through ball found him one-on-one with Tyers keeper Andy Nguyen, who he coolly rounded to slot home.

Winger Marcus Krznaric chimed in with Monash’s fourth when he beat the oncoming keeper.

Chad Shelley was the provider for Lawrence’s fourth, driving into the box and squaring for the on-fire marksman to slot home as the visitors stormed to the break with a five goal buffer.

The second half started off the same as the first with the youthful Monash outfit creating chances but unable to finish.

Isaac Abas scored the only goal of the second half after beating two defenders inside the box to drive home hard and low.

Lawrence could have added to his tally but the upright came to Tyers’ rescue from his well directed header.

Andres Nilo was introduced and nearly opened his account but for a few good saves from Nguyen, who was a standout for a battered Lightning outfit. Monash ran out eventual 6-0 winners.

Sale moved to the top of the Gippsland Soccer League with a convincing 4-0 win over a young Traralgon Olympians side.

The Swans jumped above Churchill on goal difference, however the Rams have a game in hand.

Both teams looked to play possession from the start, with Sale getting the better of their opponent during the early exchanges.

Sale finally hit its straps and took the lead in the 16th minute when defender Kristian Phillips worked down the left flank to knock past the oncoming Blues keeper.

As the half progressed Sale midfielders Ashley Ross and Raymond Allred took control of the match, allowing Sale to dominate the majority of play.

Sale players Dan Ledonne and Ross McWhirter exposed the Olympians fullbacks on a number of occasions and were finally rewarded when a well taken corner met the shin of Robbie Stephen to make it 2-0.

The second half was much the same with Tommy Nguyen looking dangerous for United, while the Blues were confined to shots from distance.

Sale made it three when Nathi Khamchom got in behind and took his chance very well.

The rout was completed when Nguyen grabbed a deserved goal to end the day 4-0 for the Swans.

On Sunday Falcons 2000 travelled to Harold Preston Reserve looking to get back to winning ways against an underrated Traralgon City outfit.

Within the first minute Tommy D’Alia had a point blank header narrowly miss the target after some wonderful build up play from the away side.

After that early let off City worked itself into the contest in a scrappy but hard-fought affair. In an otherwise uneventful first half, the score remained nil-all at the break.

The second half continued in much the same vein as the first, but with five minutes to go Falcons went for the jugular and was rewarded when Jesse Kennedy found the net from close range.

With three points seemingly in the bag, Falcons switched off and a failed clearance from central midfield led to a City equaliser through substitute James Sykes.

The away side again pressed for the winner but to no avail and came away with one point from its travels.

Cook scored on either side of half-time in his first match against the Combine, as the Horsemen’s defence held firm for 80 minutes.

NYU pegged one back but it was too late to salvage a point.

The win made it two in a row for the improving Pegasus, which sits dead equal in seventh with Monash one point shy of the six.

This weekend marks rivalry round, which will test the fortitude of several teams coming off midweek cup ties.

Pegasus will play Fortuna in a Morwell derby for the Valley Trophy Centre Cup over two legs, with the best on ground to receive the Dennis McCauley medal.