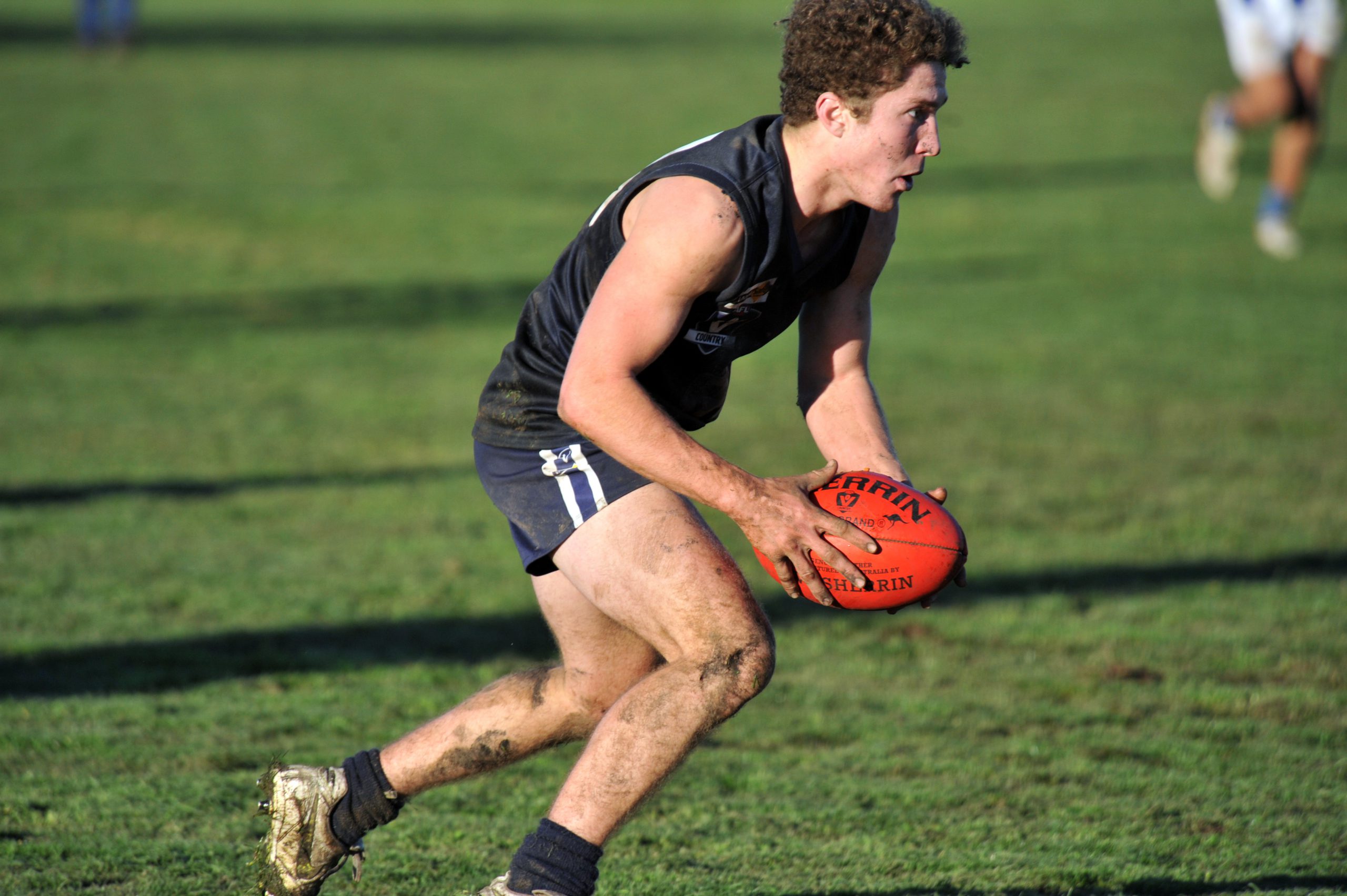 The Rosedale versus Woodside contest was appetising from the opening bounce, with key match ups across the ground bristling with intensity prior to the start.

Woodside’s Ryan Foat shouldered the bulk of the ruck work against Jon Cantwell.

The contest in the midfield with Dale Fleming and the Diamond brothers Rowan and Adam pitted against Adrian Fazioli, Josh Griffin and Clint Staley.

It all promised an enthralling clash.

In a frenetic opening five minutes of play, neither side could settle as the ball moved back and forward with little conviction between the half backlines.

Woodside’s Staley settled the visitor, snapping to register the side’s first, and his first of 10 for the contest.

Tom Love made it two on the run with the leap of Foat matching Cantwell in the ruck contest.

Staley registered the Wildcats’ third unanswered; Damian Kerr set up the goal from the wing, finding Matt Scholz who in turn hit Staley to score off his shin.

Cantwell got things going, crunching Fazioli in the contest, Fleming swooped on the ball and his slick ball movement to Adam Diamond set up Brad Scott for his first of six.

The sides went blow for blow with 12 majors scored in an highly entertaining opening term.

Rosedale snared four unanswered with the Diamond brothers combining, Scott added yet another and at the opposite end of the ground, Love had two and Staley was building for a large haul as he got the upper hand of the battle against Hughes.

Trailing by 14 points at the change, the second term was very similar to the first with the goals flowing freely in a hard hitting contest.

It took some time for Rosedale to open the scoring, with the Wildcats’ defence, led by Hank Norman and Dan Missen, working hard to contain danger forward Andrew Flanagan.

Reeling in the margin to just over a straight kick by outscoring the home side four majors to two, the Wildcats could have hit the lead if not for costly lapses of concentration which saw the ball turned over.

Cantwell’s presence was felt around the contest; Kerr was brushed aside by the big man who imposed himself in many passages of play – his tackling and attack superb.

Staley’s major seconds ahead of the half-time siren put the Wildcats seven points down at the main break.

The premiership term was an intense affair; 12 goals were scored between the sides with Rosedale’s claim on the contest gaining momentum in the final stages of the quarter.

Scott got the Blues going before Staley outmuscled Hughes to mark and goal from 20 metres out.

Some 12 goals straight was kicked by the Wildcats before what would be the first of three behinds in a row.

The Wildcat forward pressure was immense as the Blues’ backline was placed under siege and struggled to clear the defensive 50.

It was a tough day at the office for Cowwarr, which failed to mark coach Luke Cooper’s 250th senior match with celebration.

The Saints were pitted against an undefeated Heyfield fresh from the bye.

Cowwarr found itself on the back foot early with a seven goal opening blitz by the Kangaroos all but killing the contest in the opening 25 minutes of play.

The Kangaroos boasted over 40 shots at goal on their way to claiming the Komen-Holland’s trophy.

The Saints chipped away at the scoreboard however the side’s goalless third term did little to reduce the margin.

For the visitors Shaun Humphreys continued his dominance of the past month, while the Woodland brothers Kodie and Jack also impressed.

The baby Bombers stuck with the opposition in a strong opening half showing before being halted in their tracks by the higher ranked Yarram Demons.

Plagued by injuries, with some seven senior players to return to the line up for the clash against Glengarry, Bomber coach Dean Pratt continued to blood the club’s younger players in a gallant contest on the road.

Taking a slender seven point lead into the first change Boisdale/Briagolong’s experienced campaigners Matt Lee, Marty McDonough and Luke Conway were superb, but the loss of Conway through injury late in the contest hurt the Bombers.

Within a kick at the main change the Bombers looked a chance to take the points but failed to sustain their intensity with the Demons slamming home 11 goals to one after the long break to record their fourth win at home, 17.13 (115) to 6.10 (46).

City has quickly shaken off the tag of underdog this season to again become a team many in the competition are wary of.

Exploding out of the blocks to boot five goals to one the visitors set the tone early and never faltered in the contest against the seventh placed Magpies.

Led by Mitch Bennett, Nick Grainger and best on ground Brendon Rathnow in front of goals the Dogs were relentless, with their ferocious attack on the ball and man quickly becoming a signature of the side which continues to evolve under coach Hayden Burgiel.

Amassing possessions, City’s Rathnow led the charge in the engine room with Josh Barbetti and ruckman Matt Lutze flexing their muscles in the centre, while Luke Hedger imposed himself in the contest accounting for several opponents.

The third term was an even affair with the sides exchanging blows on the scoreboard.

Glengarry’s Josh King led from the front with six majors for the contest to reel in the Dogs’ 28 point half-time lead to 14 at the final change.

Ensuring victory City slammed home six goals to four in the final term with Bennett causing havoc in the forward 50.

Traralgon Tyers United turned it on in front of a large home crowd, which gathered for the Bombers’ 2004 premiership reunion, to record their opening win of the season over Gormandale.

Up and about following the side’s opening win last Sunday, the Tigers were in the contest early, however the Bombers clicked in the second term to set up a 39-point lead which they would not relinquish.

With the late withdrawal of the dynamic Brian Graham, Bomber coach Matt Stolarczyk returned to the line up and had an immediate impact.

Joined by best on ground Jake Power, and Nat Campbell, Stolarczyk and his right hand man Pat Sharp were sublime.

The goals came quick; Campbell had the ball on a string on his way to a bag of six with team mate Dalton Tripodi standing tall in the forward line with four majors.

For the Tigers Luke Hegarty was judged best on field, with Wayne Henry and Blake Slater booting three a piece.