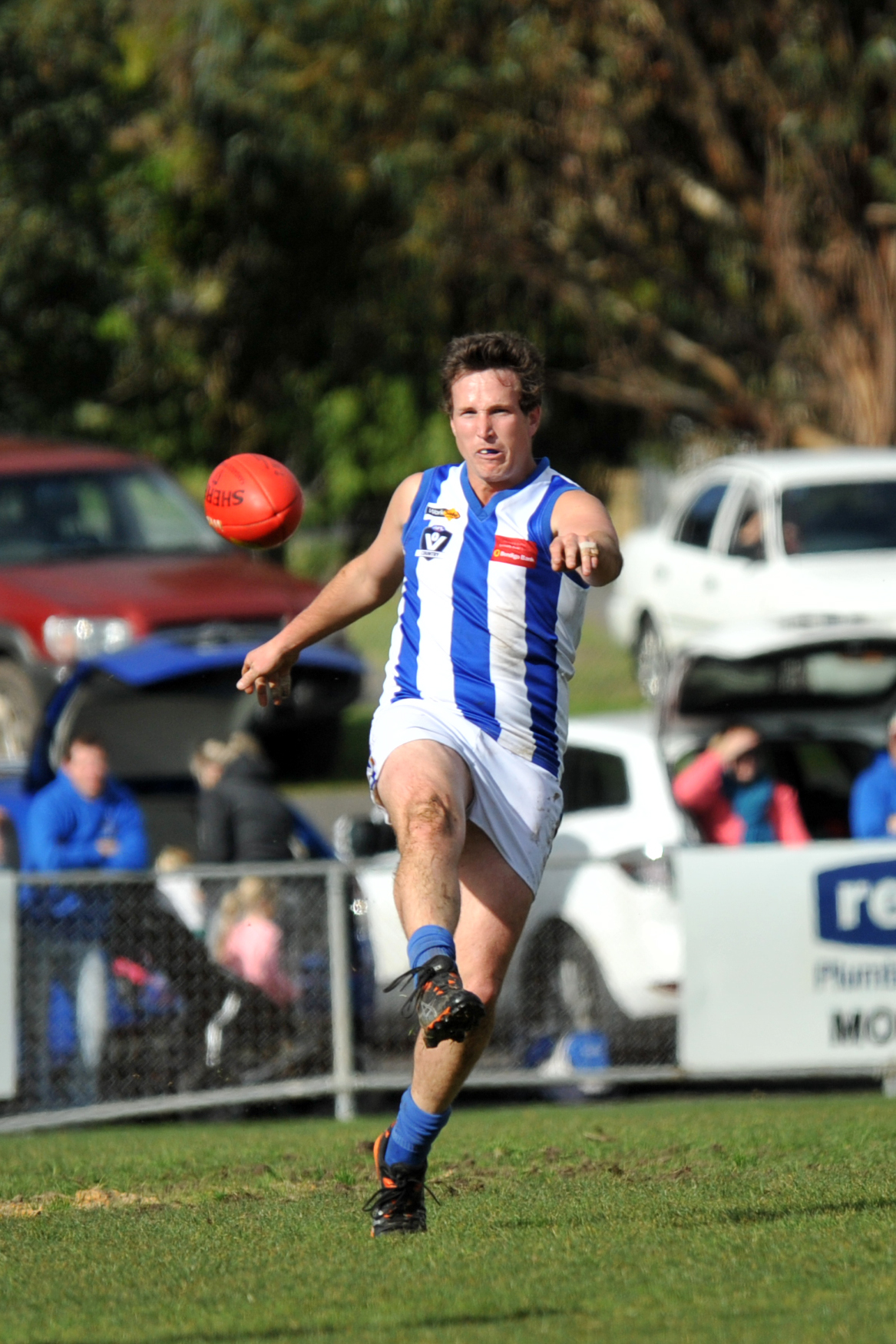 GORMANDALE made it two in a row at the expense of Traralgon Tyers United on the back of a 14-goal-to-five second half.

With the game in the balance at half-time and momentum swinging the way of the visiting Bombers late in the second term, a fired up Tiger outfit emerged from the sheds after the long change.

Not satisfied with his side’s effort early in the piece, Gormandale coach Luke Henderson urged his men to man up, play one-on-one footy and just run.

TTU registered two late term majors while holding the home side to a mere behind, but Daniel Trease met the challenge early.

An infringement for a high tackle saw Trease register what would be the first of six for the term.

With six majors to his name last week Paul Richards was at it again, matching last week’s tally with another six; a soccer roll through the sticks was followed by another as Richards and Trease picked up where they left off against Glengarry.

Blake Slater chipped in with one of his four as the Tigers made the most of their opportunities, despite at times deplorable execution and delivery of the ball at both ends.

Undisciplined play by Tiger ruckman Jarryd Gilroy gave Brian Graham an opportunity to put his side on the board but he was off the mark.

While the Bombers’ tackling was ferocious during the term, the defence led by Guy Sinclair was at times stretched and faced the same pressure in the final term as the Tigers forwards and runners lined up to join the list of goal kickers.

Gormandale did not look back after half-time, booting 6.3 (39) to seven points to boast a six goal lead at the final change, a lead that was further extended in the final term to run away with a 58-point win and climb the premiership ladder standings to ninth position.

Daniel Domaille led from the front and was well supported by Luke Hegarty and the pair was instrumental in and around the contests; Brent Macfarlane was a workhorse in defence, Trease created something out of nothing on several occasions in the forward 50 and Luke McLean collected votes for his efforts.

YARRAM boosted its percentage and strengthened its hold on fifth position with a barnstorming 108 point victory over Boisdale/Briagolong.

While the win lifted the Demons’ percentage by some 7.29 percent, they will be forced to watch intently from the sidelines next round having drawn the bye.

Starting strongly the Demons, led by Corbin Sutherland in front of goals, found the smaller Boisdale Recreation Reserve to their liking and slammed home eight majors to one in the opening term.

The Demons made light work of the Bombers, boasting a seven goal lead at half-time which grew through the afternoon.

A bag of 10 goals to Sutherland, three to Ryan Underwood and two to Louis Rodaughan set the Demons alight.

For the Bombers Matt Lee worked hard throughout the contest keeping the Demons’ engine room in check, Nichol Sandison provided a target around the ground and Reegan Tait was dogged in his attack of the footy.

REBOUNDING from a disappointing fortnight Sale City was brutal in its disposal of a depleted reigning premier line-up.

Five goals in a best on ground performance by ruckman Matt Lutze was among the positives for City coach Hayden Burgiel, whose charges were on from the opening bounce.

Four majors from Jake Schuback and three from Jake Milham aided the home side.

SEVEN goals from Heyfield’s Jesse Bedggood, who made a welcome return from weeks on the sidelines with a shoulder injury, was one of the highlights in the Kangaroos’ clinical crushing of Cowwarr.

It was a battle weary contest for the Saints who scored just one major in each term of football, and the result ruined the club’s chances of playing beyond round 20.

The eighth placed Saints proved no match for the Kangaroos who hit their straps from the outset and sent a reminder to next week’s opponent, second placed Churchill, that they remain very much the side to beat.

Hitting the ground running the home side booted eight goals in the opening term, with a further six scored ahead of half-time to extend the lead to 80 points at the long change.

It did not get any better for the visitors in the premiership term, with Bedggood on song in front of goals, and with Shaun Humphrey and Cam Garrett dominating play, the home side registered a further 10 majors in the second half and will run into finals on the back of some solid form.

Kangaroo Kodie Woodland booted four majors while the Dowse brothers, Mitch and Nic, made the most of their chances when pushing forward.

For the visitors Robbie Ferguson was judged best on field.

A SEVEN goal to five opening term by Woodside was the impetus for the sixth placed Wildcats’ 13.8 (86) to 11.7 (73) victory over their higher ranked opponent Rosedale.

With finals in their sight, Saturday’s match against Rosedale was a must win for the Wildcats and they chipped away at the scoreboard early to remain in contention for the prized fifth position on the premiership ladder standings.

The Wildcats struggled to shake the visitors early, with Ryan Foat leading the charge for the home side.

Leading by 13 points at the first change, Woodside registered a further two goals ahead of half-time as play was locked down with both sides finding the going tough.

A strong third quarter showing was required by the third placed Blues but it was Woodside which set the tone for the remainder of the contest.

Ben Johnson was a standout for the Wildcats ajnd his efforts earned three votes ahead of Foat, who had the ball on a string in the opening half.