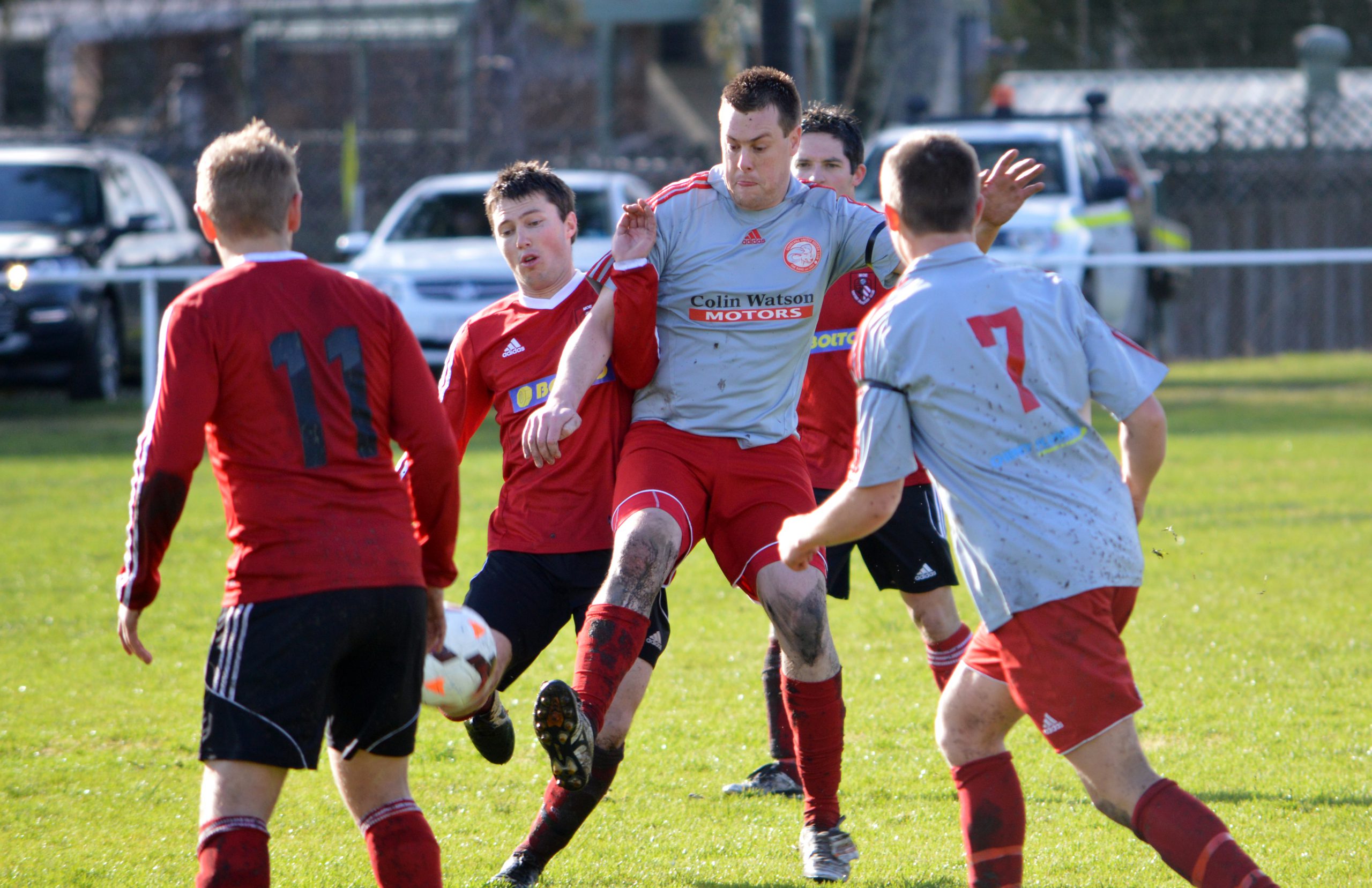 CHURCHILL United secured the 2014 Gippsland Soccer League championship with a come from behind 2-1 victory over rivals Moe United at a soggy Olympic Park on Sunday.

In a remarkable undefeated season to date the Rams cannot be dislodged from top spot with four rounds to play including catch up matches.

It marks Churchill’s fifth league championship and punctuates a golden era for the club, which has not finished below second since 2006.

“After last year’s capitulation, when we blew an eight point lead with three games to play, we’ve been working toward this day,” Churchill coach Stephen Riess said.

“There’s a feeling of redemption I’d have to say with this win today and to finish it off against Moe who got us at the line last year that’s sharpened the feeling of relief I think.

“We’ve lost a few blokes from last year through retirements and going to other clubs, and today with injuries there’s probably half a dozen senior starters missing. That’s testament to the strength of the overall squad to still get the win against quality opposition like Moe.”

For the Red Devils the title decider was built as a grudge match after an epic 5-5 draw in round 9, which was ultimately overturned as a 3-0 protest win to Churchill when Moe was found guilty of fielding a suspended player by the GSL tribunal.

Moe came out the blocks and dominated possession, creating numerous opportunities early on.

Ironically it was Dastey who was suspended when the sides last met.

Moe continued to stretch Churchill for an extended period of the first half, limiting the Rams to the odd counter attack and would have rued not going further in front.

A switch of wingers saw Churchill youngsters Jarryd Johnson and Ben Skinner start to find some openings as the Rams dominated the final 15 minutes prior to the break.

A Paul Riess shot from the six yard box was saved by Moe stalwart, custodian Peter Albanese, before an equaliser was found just a minute before the interval.

Taylor Jackson was given too much room on the edge of the penalty area by his Moe markers and he coolly slotted home past a diving Albanese.

The second half followed a similar script to the first with Moe dominating play, but the difference was a distinct lack of potency in the attacking third from the Red Devils as the Rams soaked up the pressure.

Churchill was almost punished for a goal keeping error from Jason Sands when a routine save bounced off his chest to the feet of Sammy Gatpan who looked certain to score, but a desperate goal line lunge from Rams captain Luke Van Lambaart kept the scores level.

Soon after the Red Devils had another chance to take the lead when Joel Baldwin picked his spot inside the post only to see Sands brilliantly tip the ball away from danger.

Churchill then kicked into gear and heaped the pressure back on Moe with a succession of crosses and corner kicks resulting in a series of near misses.

With 10 minutes to play Churchill claimed the win and the title when Skinner headed a Riess cross into Albanese’s midriff and the rebound trickled over the goal line.

Churchill will officially be crowned champions after the final home match of the season on Saturday, 30 August against arch rivals Fortuna.

FALCONS looked to continue its strong run of form when it hosted a depleted Tyers outfit on Sunday at Latrobe City Soccer Stadium.

In blustery conditions, the birds picked up where they left off in their 12-1 win in the previous encounter, proving far too good for the Lightning in an 11-2 victory.

Goals to Nick D’Alessandro and Jordan Kennedy and a double from in-form Englishman Liam Johnson were bookmarked by a monster haul of seven goals to Jesse Kennedy.

The day out for the prolific striker saw him move to 24 goals for the season and leapfrog Sale’s Tommy Nguyen in the race for the golden boot.

The dominant display also gave Falcons a handy goal difference boost to move above Moe into fourth spot on the ladder, just one point behind Fortuna in third.

A win at home this weekend against Newborough would keep the pressure on the sides above as the ladder takes shape in the lead up to the finals.

TRARALGON City entered round two of the local derby with Olympians eager to consolidate its top six standing, but faced a stern test from a reinvgorated Olympians line up.

With some new blood in blue shirts the game was tough from the outset, and the small crowd which braved the weather was not disappointed with the speed or quality of the game.

When Sam Lietzau slotted Mau Aliyu a deft ball through the centre City hit the lead 1-0 at the end of the first half.

Olympians came out hard in the second half and a ricochet in the box saw them equalise early.

The Roosters fought back fast and regained the lead at 2-1 through Dau Mayen, with a great strike from the top of the 18 yard box.

Mayen struck again soon after and City veteran Rob Spier killed the game off with a late goal to hand his side a 4-1 triumph ahead of a welcome rest prior to facing Churchill.

WITH one hand on the Derby Cup Fortuna hosted Pegasus for the second leg of the tie and had a torrid time hanging on to the silverware.

The game started hard and fast with some crunching tackles by both sides, in particular from Pegasus enforcer Drew Sedgwick.

Fortuna looked to have struck first from a free kick outside the 18 yard box when David O’Dowd hit Mauro Deluca on the head at the back post, but his goal was disallowed due to an infringement on Horsemen ‘keeper Leon Cook.

On the 23 minute mark a well-placed header by O’Dowd was again saved on the line by a diving Cook.

Three minutes later some individual brilliance by Dylan Fairbrother resulted in Fortuna’s first and only goal of the day.

He received the ball at the halfway line, took on several players and, despite being knocked down twice, managed to dribble the ball all the way to goal and placed it in the net.

Pegasus tightened up the defence to finish of the first half with a 1-0 deficit.

The second half saw shots at both ends with keepers doing their best to deny further goals.

Alradi Ismail fired a lightning header at goal from a set piece, but it was not enough to beat the Fortuna custodian.

With five minutes to play Fortuna was in a position to seal the game with an open goal begging, but with the ‘keeper on the ground the ball was driven over the crossbar.

Pegasus could not summon a response and Fortuna claimed the cup in its inaugural year with wins in both ties, 3-1 and 1-0.

NEWBOROUGH Yallourn United put a huge dent in Monash’s top six ambitions with a 2-1 win over the Wolves on Sunday.

Andrew Batt and Jeremy Dunn swung the axe for the Combine, and Ethan Lawrence’s second half strike was not enough to overhaul NYU’s lead.