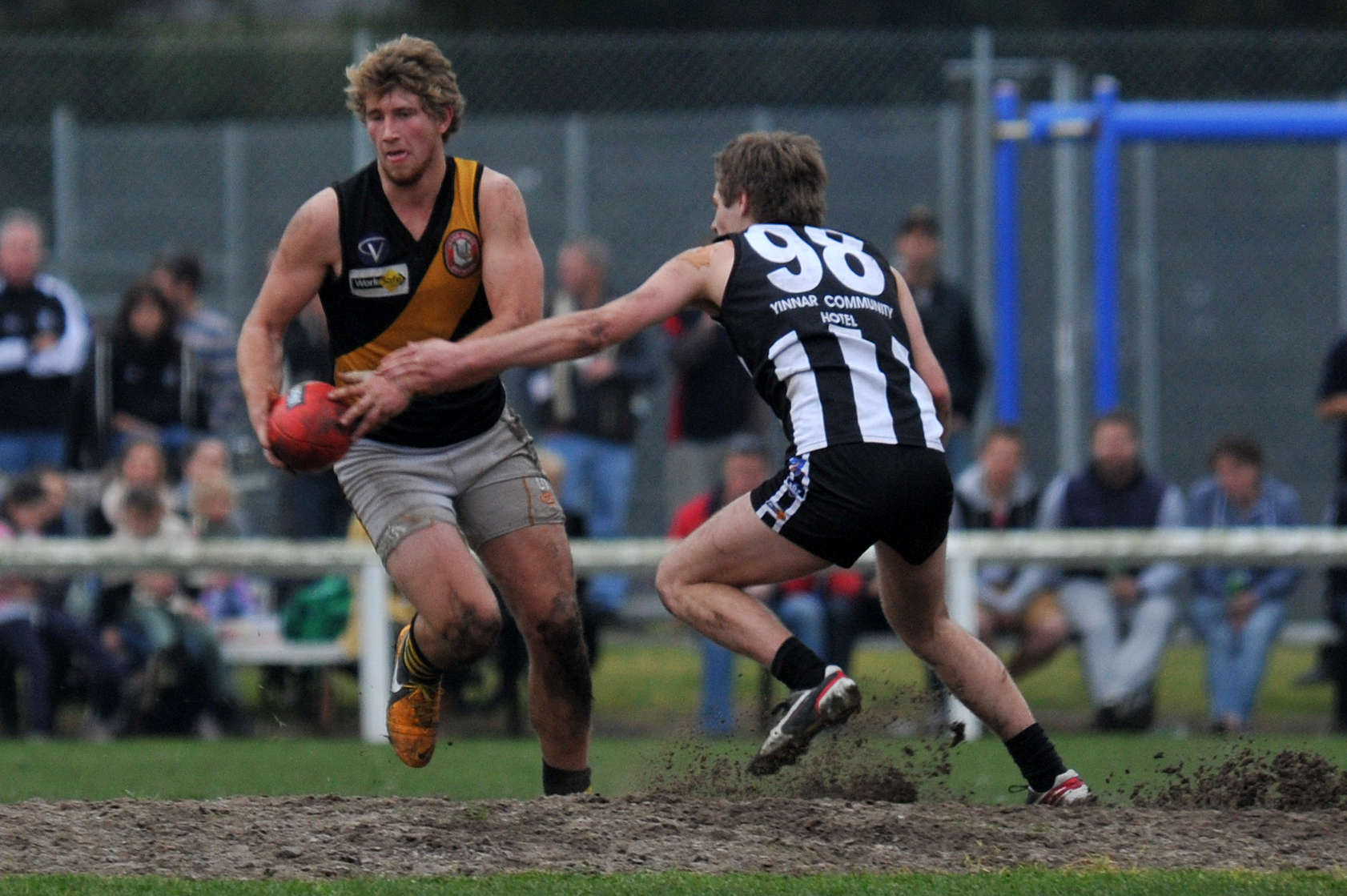 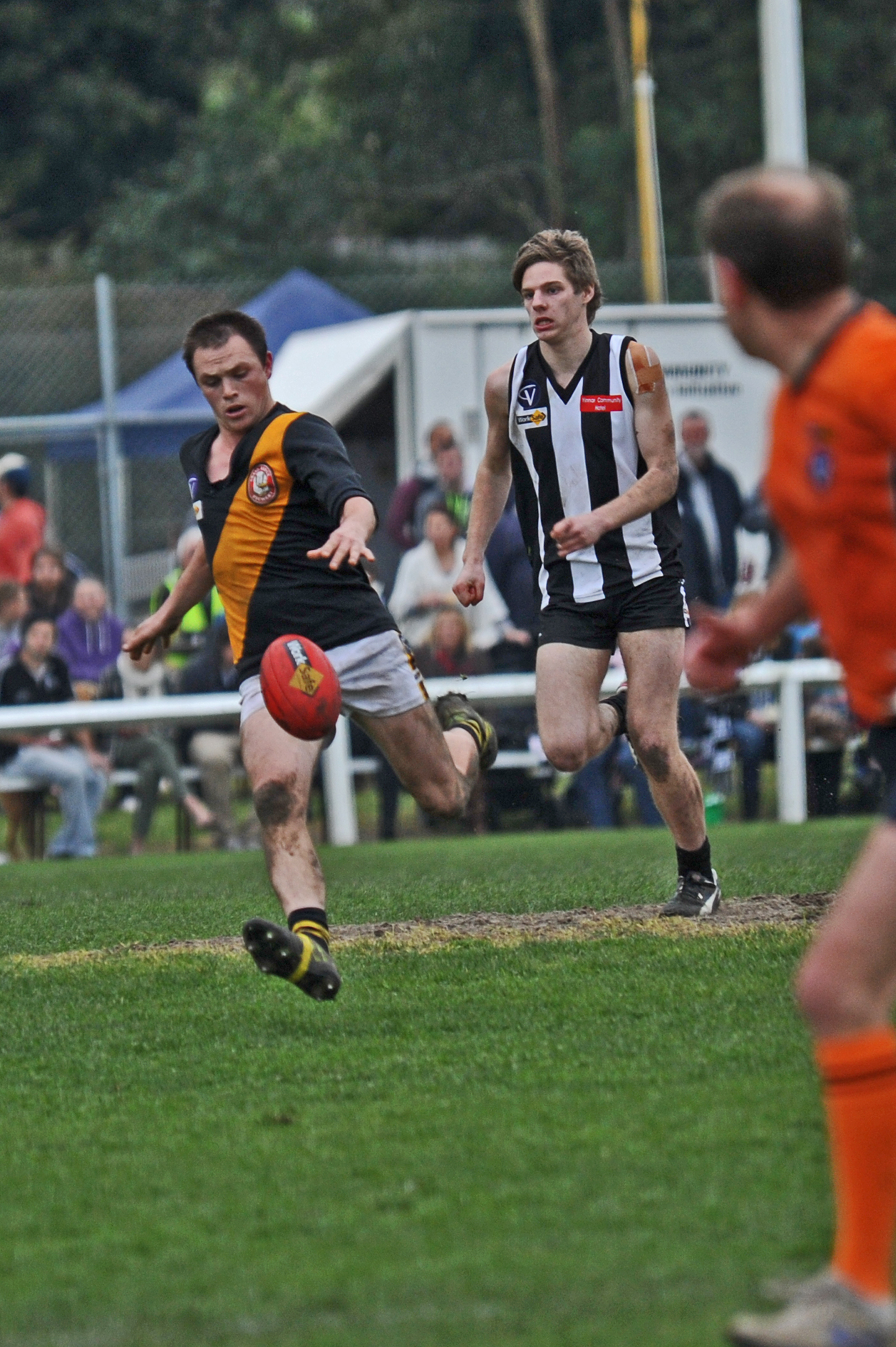 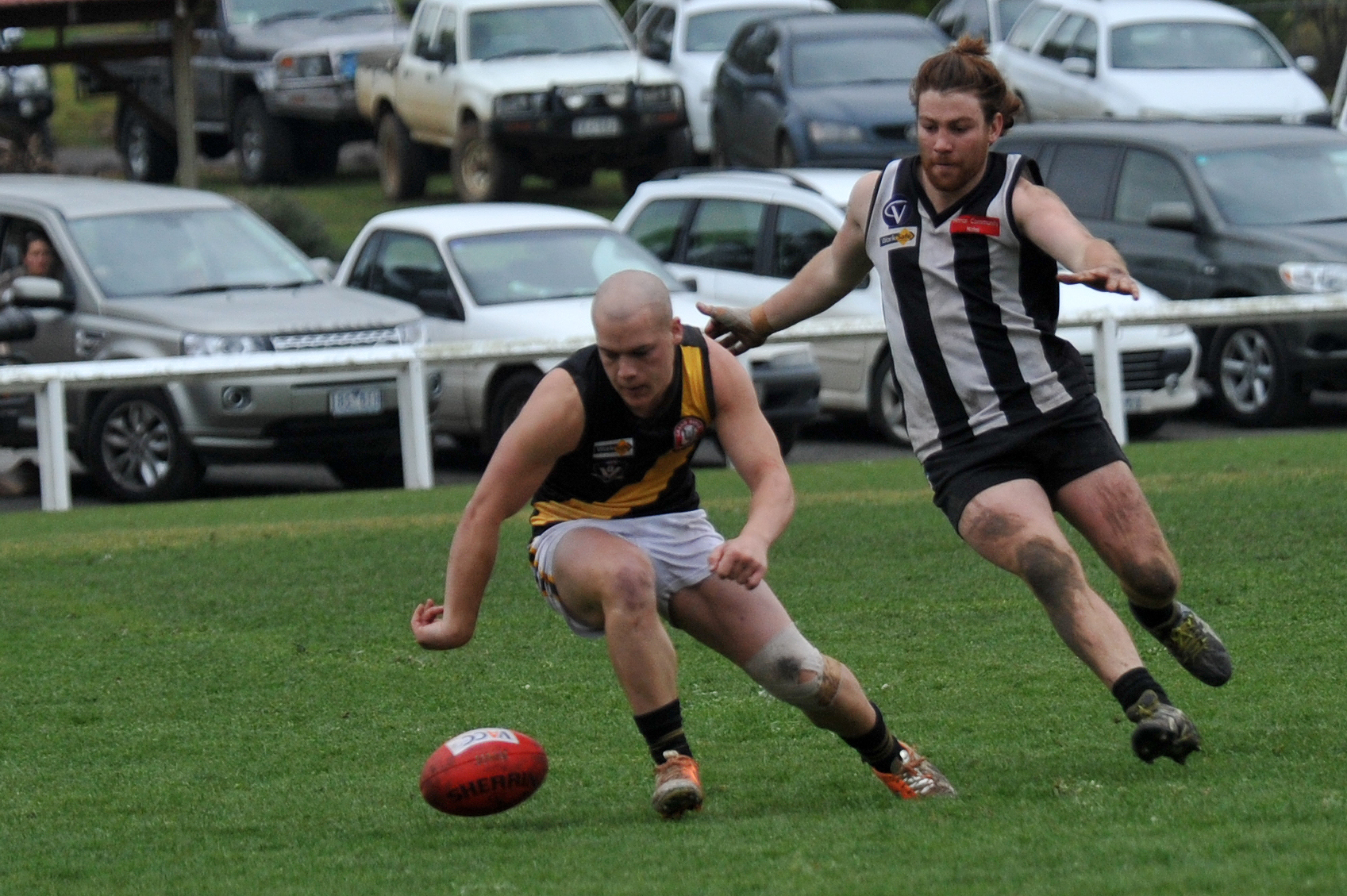 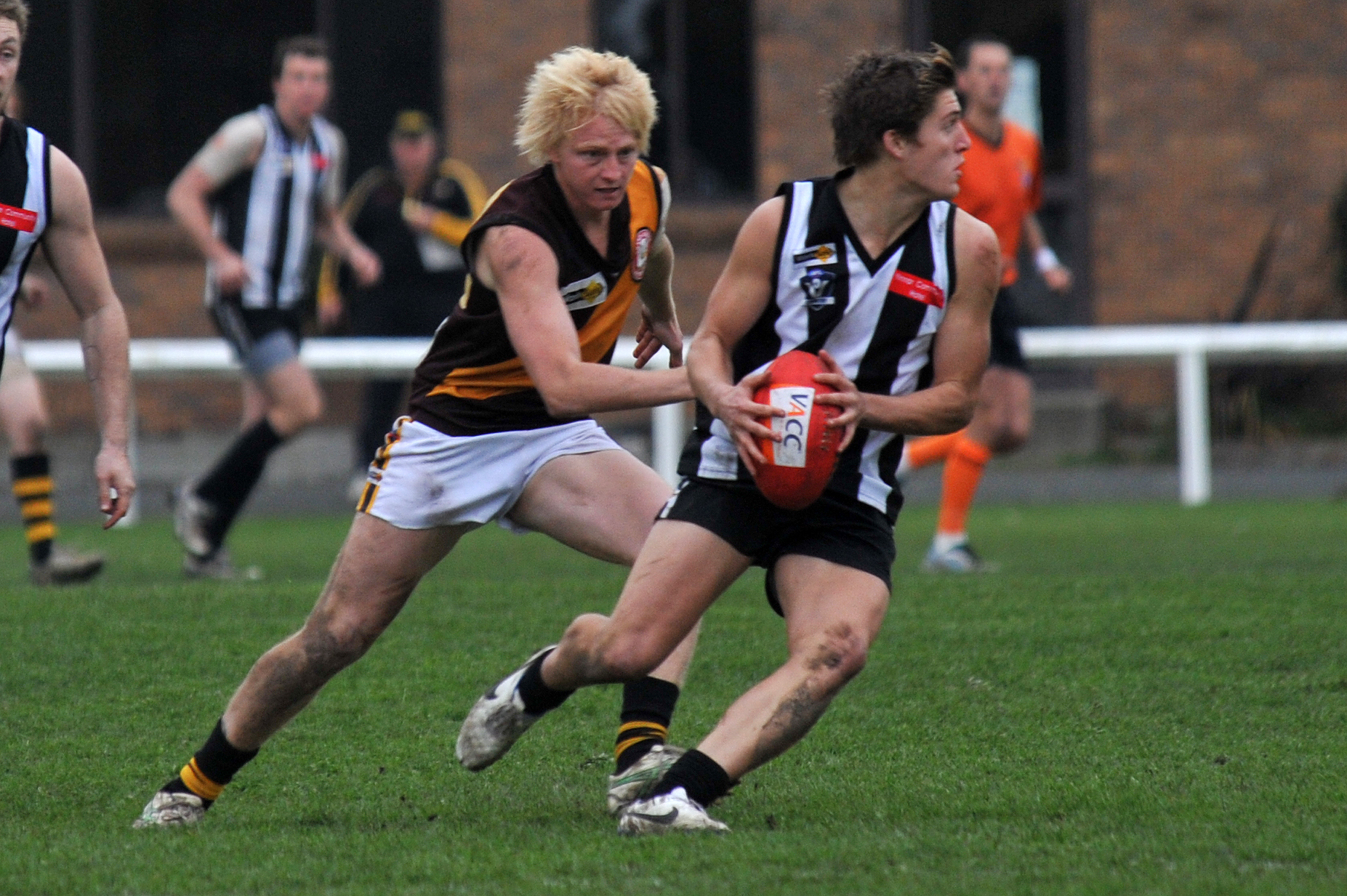 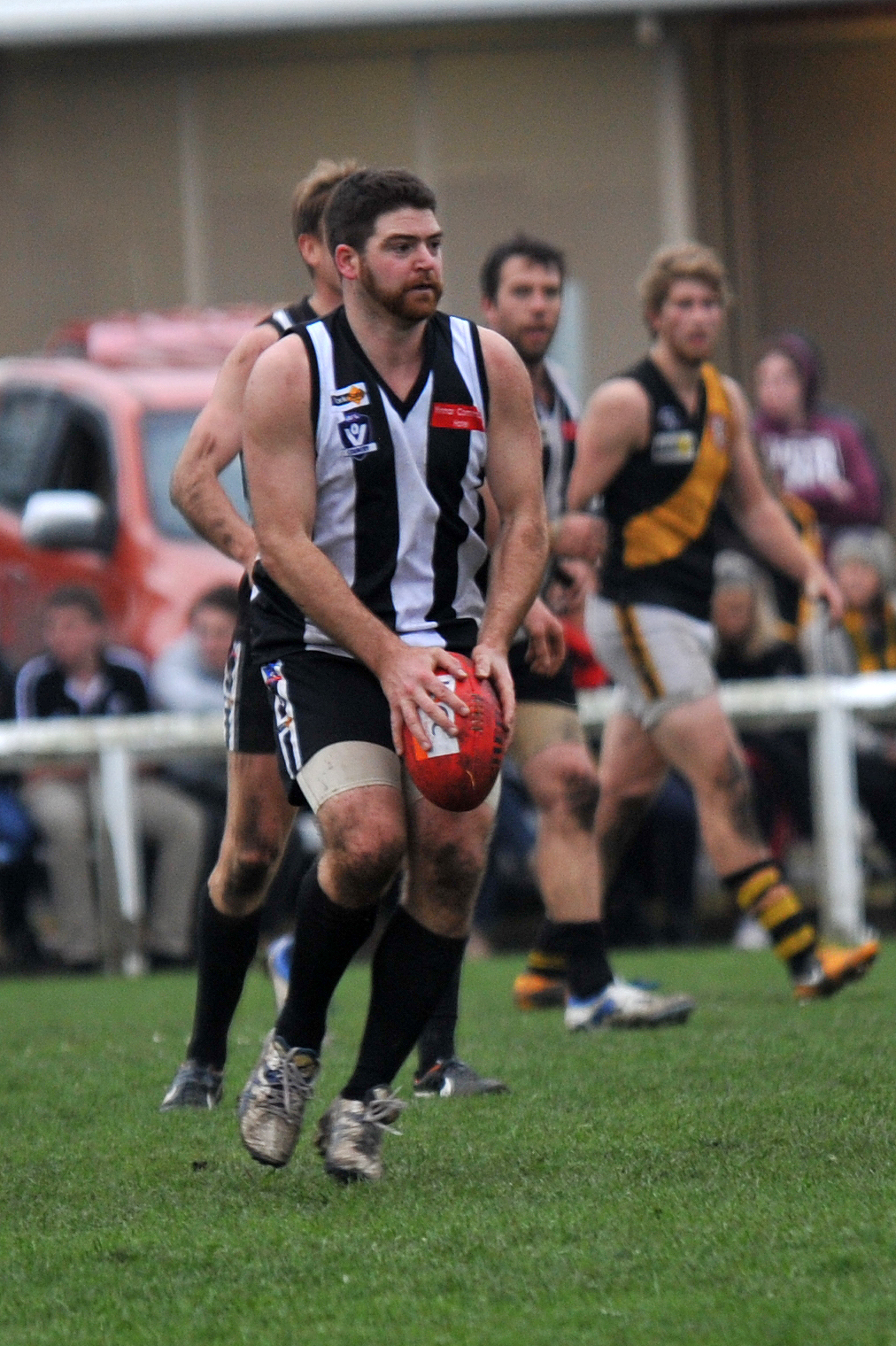 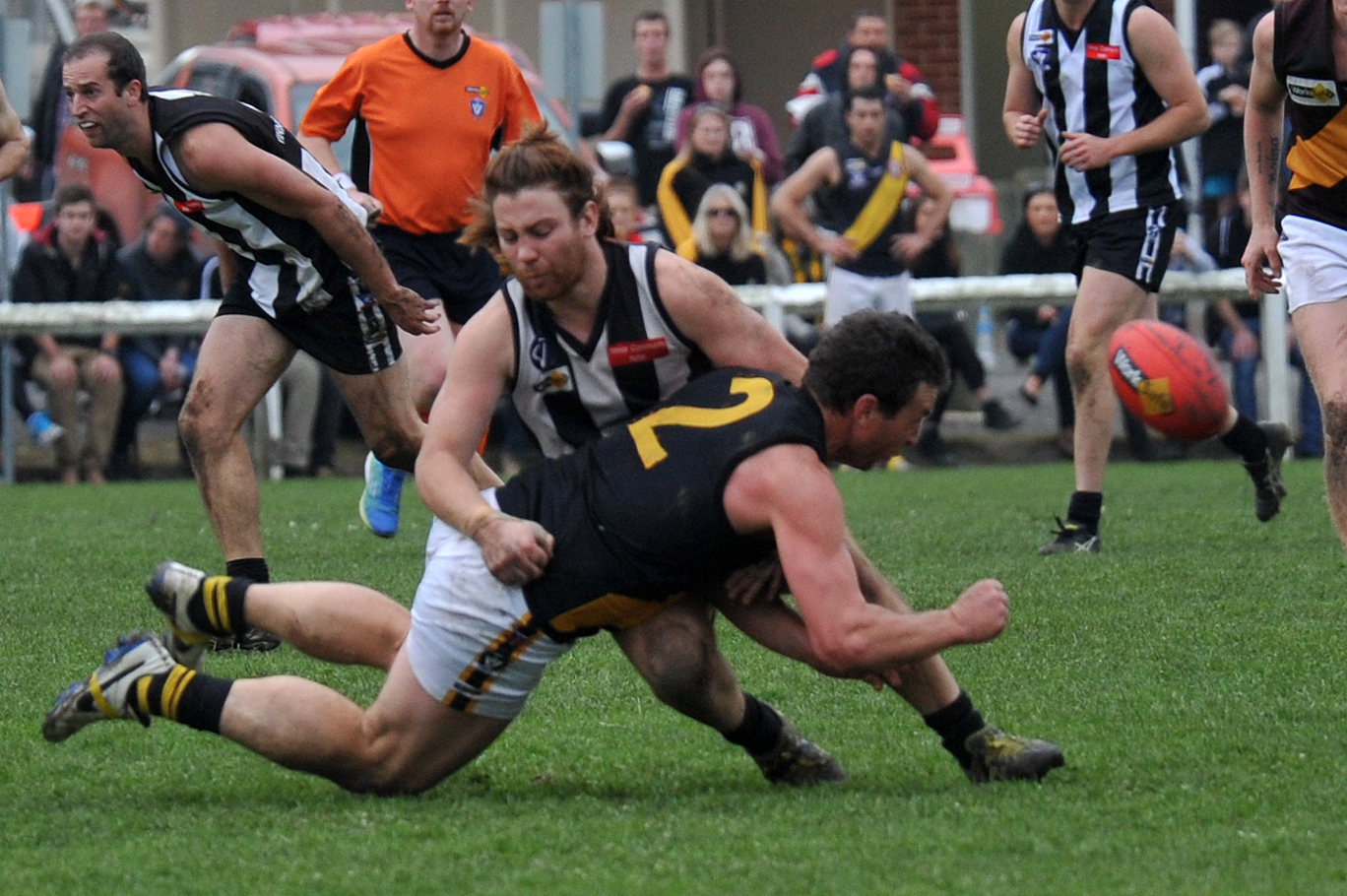 The Tigers’ victory set a date for this weekend’s second semi-final against Newborough at Thorpdale.

Mirboo North staged an incredible turnaround to make amends for its 92 point loss to Yinnar a fortnight ago, and won by 10 points in a rugged match at Boolarra.

Yinnar came into the final with eight changes to the lineup, bringing back their best for the big test, while Mirboo North made one alteration to last week’s outfit. A seven goal first term set the pattern for what was to become a real contest. Mirboo North broke out of the blocks early with Tim Traill holding his marks and kicking true.

The Tigers were well on their way, but there was little between the two sides except Mirboo North kicked a little straighter.

Yinnar’s Tim Aitken was doing his job to keep the Magpies in the match and a brace in the opening term put them within five points at the first break.

Coach Sam McCulloch was leading by example with strong play for the Magpies, assisted by Jayden Embry and Leigh Cummins.

Mirboo North had a lot of the play, but Yinnar kept the pressure going, forcing the Tigers to make early errors.

Yinnar swung into action in the second and, with their smaller players starting to move the ball, took the game by the scruff of the neck.

Mirboo North looked lost at stages, and despite having plenty of the play could not convert.

Shane Peters and Ben Ah Mat were giving plenty for the Tigers, but at the other end Aitken was doing the damage for the Magpies with a couple of fine goals to put his side in front.

Mirboo North was forced to switch league golden boot winner Traill into the ruck and Jacob Nash to the full-forward position.

With the clock ticking away towards half-time, Aitken raised the double flags for his fifth of the match and third for the quarter as Yinnar took a nine pointer going into the half-time break.

Aitken then scored his sixth early in the third and Yinnar skipped out further before Mirboo North steadied to kick the next five goals unanswered.

Kris Berchtold and Damien Turner provided drive around the ground, but it was Traill who produced the magic, kicking goals and working around the ground to help his side regain a nine point lead by three-quarter-time.

The final term was a tug-of-war between two evenly match teams with neither able to score goals.

Mirboo North shut down Yinnar by keeping possession and some of the more experienced Tigers, such as Berchtold and Matt Holland, were able to control the game as Mirboo North ran out 10.7 (67) to 8.9 (57) winners.

BOOLARRA came from behind to knock Trafalgar out of the running in a low scoring elimination final yesterday.

Trafalgar took control in the early stages and looked like running away with the game, with goals to Hayden Farrell and Matt Robertson (2) setting up a strong quarter.

The Bloods completely blocked out Boolarra, which could not find its bearing and failed to score for the term.

Setting up a 29 point lead at the first break would normally be enough, but Boolarra used the second term breeze to advantage, running the ball wide along the western side, and then coming infield with great success.

Their players started to lift, and Nick Hider was effective and Ken Towt was at his best.

Trafalgar’s tall skinnies were good in the air, but Scott Boddy and Sam Mazou relieved the pressure on the scoreboard with two quick goals for Boolarra.

The Demons were down to 17 players when Jules Elson was sent off for a stretch in the sin-bin, and the resulting free gave Trafalgar a fifth goal.

Boolarra forced its way back into the contest with Jesse Giardina and Mazou looking dangerous around the goals.

Bevan Charleston-White goaled for Boolarra on the half-time siren, which brought the score to 5.8 (38), 4.2 (26) in Trafalgar’s favour.

The third quarter provided anti-climactic as neither team scored a goal.

It was hard pressure football all around with no real advantage gained.

Trafalgar scored four behinds and Boolarra one, its only score for the day to the southern end.

Boolarra announced its intentions early in the last term and attacked constantly.

Hider goaled within two minutes and the Dees were edging closer.

The pressure was on the Bloods’ defence and they moved more talls to the backline, but Boolarra scored again to bring the margin to three points.

The lead would change three more times within the next six minutes.

Boolarra hit the front through Boddy, then Trafalgar eventually got the ball down their end and replied, regaining the lead by three points.

It was Traf’s first goal for 54 minutes, but their lead lasted only 80 seconds as Boolarra struck through Charleston-White.

Seconds were ticking away and Trafalgar gave away a 50 metre penalty, which enabled Boolarra a minor score, but the resulting kick out saw captain Daniel Metcalfe grab the ball from the boundary and slot through the sealer.