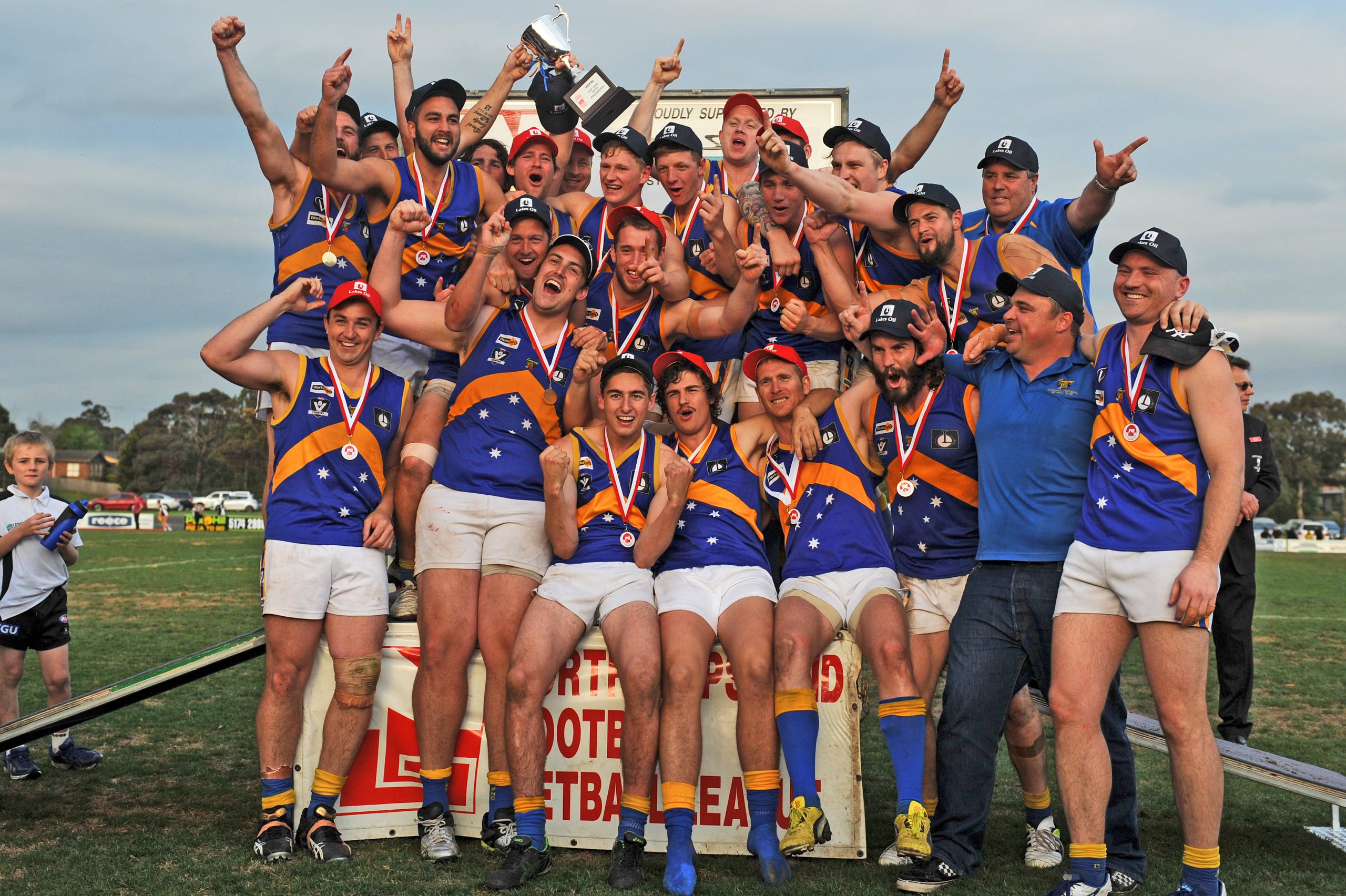 Touted as the ‘X factor’ for Churchill’s hopes of toppling the undefeated Kangaroos, the star forward showed his class with a haul of seven goals to lift the Cougars to an unlikely 20.9 (129) to 10.18 (78) triumph.

The Cougar power forward was not alone in a true team effort; Churchill took command of the game early before an inspiring eight-goal-to-three third term all but flattened Heyfield’s hopes.

The Kangaroos coaching duo of Damien Birss and Adrian Cox was left heartbroken for the second straight season as the powerhouse club fell 51 points short.

The Kangaroos kicked the first of the match, before Churchill responded with two of its own.

The momentum continued to swing toward the Cougars early, bucking the trend of all three previous encounters this season, but consecutive behinds kept Heyfield in touch, before a major levelled scores.

Churchill looked to respond through livewire of the term Hamish Towns, whose shot at goal fell short of the line, before Joe Whykes saw his shot at goal strike the post. Towns made no such mistake second time around, scooting away from Brenton Dinsdale to run into an open goal and register Churchill’s third.

It was followed in close check with the Cougars’ fourth after an errant Heyfield handpass was pounced on by Celima.

Brad Knowles looked to open up his account but his first shot at goal swayed across the face, while Holt played the role of rover to pick up the loose ball and snap at goal from five metres out.

Heyfield trailed by 14 points, before Humphries took a strong contested mark to combine with Daniel Stevens in the corridor, who in turn hit the chest of Jesse Jackway to mark and split the middle of the sticks after the quarter-time siren.

The sides exchanged blow for blow in an even second term, Woodland throwing himself into the fray at every turn while Churchill lost Towns through injury after the youngster looked to take a courageous mark in the forward line.

Flying back with the flight of the ball, Towns crunched into the behind post; Brighton was then stretchered off with a suspected knee injury as the Cougar casualties piled up.

Knowles opened the scoring for Churchill with the first of the second term, as his midfield partners looked to restrict Heyfield’s Dave Kelly, Woodland and Stubbe.

Heyfield continued to show signs of unease – kicking into the man on the mark, straight to the opposition or running into trouble holding the ball – as the competition’s impervious force began to fray at the edges.

However, Churchill’s inaccuracy in front of goal kept the door ajar for Heyfield to challenge.

The ‘Roos threatened, Humphries was working hard to spoil the tall timber of Brown and Dillon Leys, Jackway was holding the upper hand against defender Dean DeGroot and Cam Garrett’s pace was proving advantageous on the rebound. Knowles added his second for the term to hurt Heyfield’s hopes, before Kangaroos captain Brenton Dinsdale boosted them with a goal to peg the deficit back.

Churchill’s defence, led by coach Allan Chandler, held strong under the pressure, Tim Darby pushed deep into the backline early to contain Jesse Bedggood, who was forced to work hard for each possession.

Churchill defender James Hayward conceded a free kick to Daniel Stubbe, whose shot at goal swung back enough to sneak through for a major and bring his side within eight points of the lead.

A purple patch by Nick Campbell saw the Cougar amass possessions down the wing through the term to set up several majors.

The pressure of the Cougars forwards resulted in Holt again winning possession to add another to his tally ahead of half-time, 8.7 (55) to 5.9 (39).

Heyfield’s grip on the premiership cup was all but prised away in the third term, as the Cougars piled on eight-goals-to-three to take control.

Holt was in the thick of it, Campbell was a major player along with captain courageous Williams, who stood up in front of goal and delivered the ball effectively over and over again.

Celima and Williams combined with Holt on separate occasions which saw the star forward add to his match tally, and Campbell’s sleek handpass to Williams saw the midfielder sprint into goal to register the Cougars’ second on the run to go 31 points ahead.

Bedggood scored from an acute angle, hard up on the boundary line, to slow Churchill’s momentum, but Knowles soon had his third for the match and the margin drew out to seven goals.

Birss and Cox moved Lucas Jenkins onto Holt but soon other Cougars stood up, Paul Metilkovec among them when he roved the ball in the goal square to score.

A late major to Heyfield was the only shining light in a disappointing term. Holt registered his seventh major in the opening minutes of the final quarter, and from there it was a procession as Williams and Knowles added to Heyfield’s misery.

Unthinkable at the start of the day became reality as the Cougars ran out comprehensive victors and 2014 champions.